Home > News Center Stories > And the Jimmy Award goes to…

And the Jimmy Award goes to… 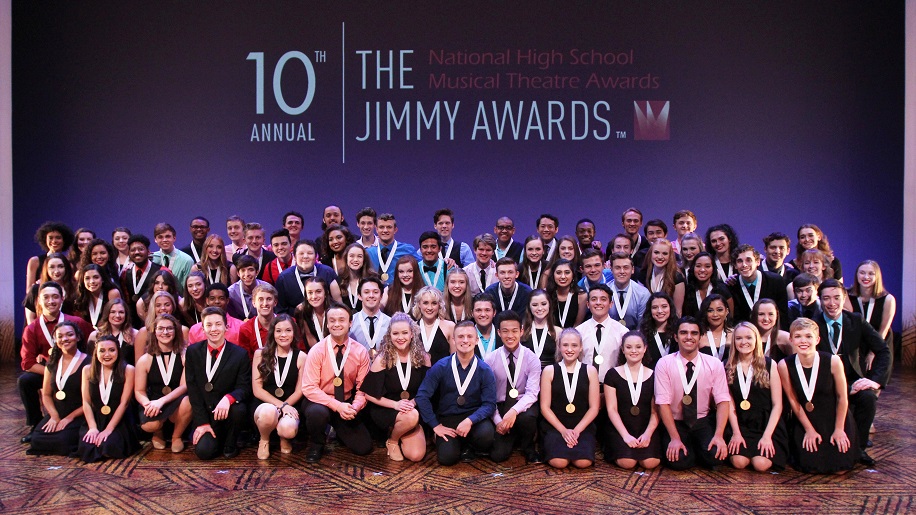 80 nominees from 24 states pose pre-show at the Minskoff Theatre in New York. Photo by Henry McGee/NHSMTA

This life-changing event was hosted by Tony Award winner Laura Benanti and presented by the Broadway League Foundation. The Jimmy Awards are named in honor of the late James M. Nederlander, Chairman of Nederlander Producing Company of America. Both winners were presented with a check for $10,000 to further their education. They will also be eligible for a four-year merit and need-based scholarship to attend the New Studio on Broadway, NYU Tisch School of the Arts Department of Drama, contingent upon acceptance into the program.

Among the 80 high school performers from 24 states participating and performing, were Tennessee’s own Tiyanna Gentry of Hillsboro High School and Sevon Askew of Central Magnet High School, who were named Best Actress and Best Actor at the 2018 Spotlight Awards ceremony on May 12. The two participated in workshops and rehearsals and performed in medleys on a Broadway stage.

Six Jimmy Awards finalists each received a $3,000 scholarship toward their future education from BNY Mellon.

Additional awards were presented and winners received a $2,000 scholarship each:

Best Performance in an Ensemble, presented by Disney Theatrical Group

Special Recognition Scholarships, presented by BWF Foundation, Once Upon A Time Productions and Pantages Presidents Club

Spirit of the Jimmys, presented by Music Theatre International

(This $2,000 cash scholarship will be split between the two nominees who tied for the award)

Monday’s production was directed by Van Kaplan and choreographed by Kiesha Lalama. Michael Moricz was the musical arranger and conductor, and Mary Jane Brennan was the writer. All four have been with the Jimmy Awards for all 10 years.

The annual Broadway-focused talent showcase featured performances by all 80 nominees and solos by select finalists. Their debut on a Broadway stage followed eight days of rehearsals and private coaching with faculty at the New Studio on Broadway, NYU Tisch School of the Arts Department of Drama and other professionals. Students also attended a performance of Dear Evan Hansen, including a talkback with the cast.

The NHSMTA are presented by the Broadway League Foundation. Founded in 2009 by Nederlander Alliances LLC, Pittsburgh CLO, and Broadway Education Alliance (BEA), NHSMTA’s mission is to raise the profile of musical theatre in schools, recognize dedicated teachers and inspire the next generation of performers and enthusiasts. The NHSMTA program is supported by many leading theatre industry organizations. More information about the National High School Musical Theatre Awards program can be found at JimmyAwards.com.

JIMMYS BY THE NUMBERS:

6 – Number of nominations for performances from Into the Woods, the most performed show among the nominees

15 – Age of the youngest nominees

24 – Number of states that the nominees represent

26 – Number of nominees who play sports

27 – Number of Tony nominations among the judges and coaches

28 – Number of Jimmy Award alumni in the audience

48 – Number of different shows these students were nominated for

80 – Number of nominees for this year’s Jimmy Awards

800+ – Number of productions that the 80 nominees have performed in

100,000+ – Estimated number of students nationwide who participated in qualifying shows from which the winners come to New York for the Jimmy Awards

$2,000,000+ – Scholarships earned by nominees throughout the ten years of the Jimmy Awards

THE BROADWAY LEAGUE (Charlotte St. Martin, President), founded in 1930, is the national trade association for the Broadway industry. The League’s 700-plus members include theatre owners and operators, producers, presenters, and general managers who present in nearly 200 markets in North America. Each year, League members bring Broadway to nearly 30 million people in New York and on tour across the U.S. and Canada. The Broadway League has recently added a new category for International membership to collaborate with professionals from around the world who produce and present Broadway quality theatre. The Broadway League annually co-presents the Antoinette Perry “Tony” Awards®, one of the most coveted awards in the entertainment industry.

This year, the entire show was streamed live on Facebook via the Jimmy Awards Facebook page with support from 2017 Tony Award winning Best Musical Dear Evan Hansen, Wells Fargo, and video and technology partner Apples & Oranges Arts. The ceremony is still available for viewing for a limited time… so go watch it.