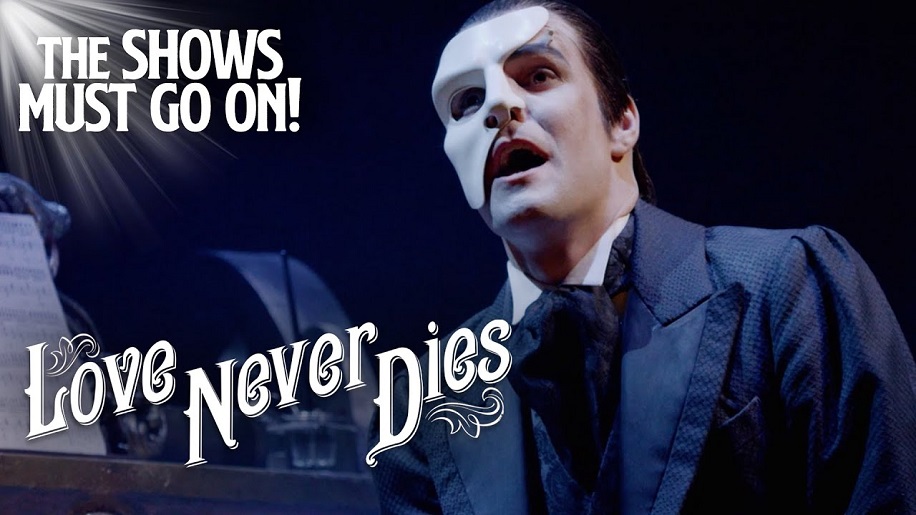 As West End and Broadway lower their curtains to slow the spread of coronavirus, arts institutions everywhere have been looking for creative ways to continue to share the magic of musical theatre with fans.

Both on a national scale — like the Metropolitan Opera and National Theatre — and a local one — like Nashville Shakespeare Festival and Nashville Ballet, institutions have been getting creative by providing filmed versions of stage shows to audiences at home.

Quentin Oliver Lee as ‘The Phantom’ and Eva Tavares as ‘Christine Daaé’ (Photo by Matthew Murphy).

Even composer Andrew Lloyd Webber, an institution himself, has been getting in on the fun.

Not only has the musicals legend shared several individual songs performed by himself at his piano in videos on his Instagram and Facebook accounts, Really Useful Group (in partnership with Universal) has been offering a free stream of one of his productions every week on the YouTube channel The Shows Must Go On!.

Two musicals in the series were announced initially, and the rest are being unveiled week by week. After last week’s screening of a special 25th anniversary production of The Phantom of the Opera — which was watched by more than 11 million people and raised more than $400,000 for the Actors Fund and other charities — you can now catch Lloyd Webber’s 2010 sequel: Love Never Dies, which kicks the Phantom story 10 years down the road.

The production will be available to watch for 48 hours, beginning April 24 at 1 p.m. CST.

The series began on April 3 with Joseph and the Amazing Technicolor Dreamcoat and Jesus Christ Superstar the following week on April 10. In addition to full-length videos, the channel streams clips and behind-the-scenes footage.

Yes, we know. It’s no replacement for the real thing; and we anxiously await when we can gather together again and experience art together. But there’s still plenty of ways to enjoy musical theatre from the comfort and safety of your own home during this temporary period.

In case you missed TPAC News Center’s online guide for Broadway streaming, here is an updated list of ways to enjoy your favorites:

The 2019 Staged Concert – Various ways to download and donate

The Phantom of the Opera

The Phantom of the Opera at the Royal Albert Hall is available through the subscription service Broadway HD.

Tapestry: Live in Hyde Park (featuring the West End production of Beautiful – The Carole King Musical) is available to rent and buy on Amazon Prime.

The King and I

The film is available through Amazon.com.

The film is available for rent/purchase on YouTube, Google Play, Vudu, Amazon Prime and iTunes.

Fiddler on the Roof

The film is available for rent/purchase on YouTube, Google Play, Vudu, Amazon Prime and iTunes.

Broadway on Demand – launching in May

This new platform will premiere with a live stream concert event, and the platform will offer video-on-demand, live events and educational resources.