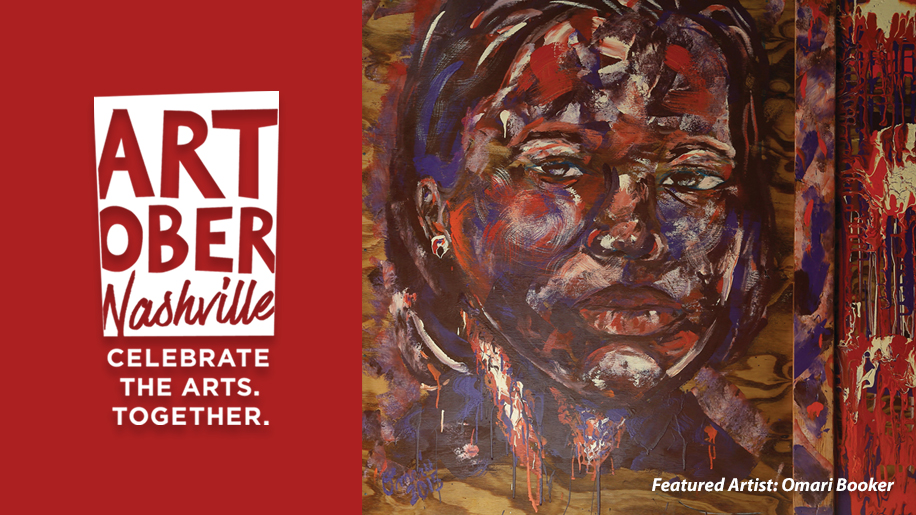 “Blueprint II,” one in a series of paintings by Omari Booker, is this year’s official backdrop for Artober Nashville.

“It’s important for us to continue featuring and supporting local artists,” said Erin Holcomb, manager of NowPlayingNashville. “Booker’s piece of work ties nicely into the theme of Artober Nashville 2020 – Inclusion.”

A Nashville native and graduate of Montgomery Bell Academy, Booker earned a bachelor’s degree in Graphic Design from Tennessee State University. His work has been influenced by masters such as Vincent Van Gogh and Salvador Dali, as well as modern artists such as Charles White and Jacob Lawrence.

The 40-year-old studio artist specializes in oil paintings and mixed media, and he works using found objects. His work has been shown at the Frist Art Museum and Vanderbilt Divinity School, and he has been a curator and artist-in-residence at Nashville’s Woodcuts Gallery and Framing.

Recent works have included President Barack Obama, Kanye West, and a mural titled “I Live Here,” which is painted on the side of an arts-focused affordable housing development in North Nashville.

During the ongoing pandemic and social revolution, Booker took to his studio to create a softer energy through his works and discover how we find human connection.

“My work consistently speaks to issues of social justice,” Booker said. “During the popularization of the Black Lives Matter movement, I was led to create work that speaks to the love that is needed to sustain a revolution and rebuild community when the battles are over.”

These works represent a new exhibition called “Need a Hug,” which explores the vulnerability that is integral to the human condition, alongside the incredible isolation and loneliness so many are experiencing these days. The exhibit will be on display October 10 to November 21 at The Black Box Gallery in The Local Distro, 614 Garfield St. in Germantown.

On November 10, Booker will participate in one of TPAC’s Salon Series events — “Nashville’s art scene from ‘Musica’ to ‘I Believe in Nashville.’ This free, virtual event will feature a discussion with Booker, artist Adrien Saporiti, and Susan Tinney of Tinney Contemporary for a deep dive into what inspires Nashville’s artists, galleries and more. Hosted via Zoom, reservations are required for this event.

Held from September 28 to October 31, Artober Nashville will highlight the depth and variety of the arts community and its many public offerings

Visitors to ArtoberNashville.com will find hundreds of arts and cultural events both online and in-person — many unique to the month of October — in every discipline, including visual and performing arts, music, history, language, and film.

In addition, this year will feature a variety of new programming:

Although NowPlayingNashville.com has been an organizer and presenter of Artober Nashville since its creation by the Metro Arts Commission in 2011, this marks the online arts and entertainment website’s fourth year operating the program. For more information or to add your event, visit ArtoberNashville.com. Artober Nashville is funded by NowPlayingNashville, as well as Ryman Hospitality Properties Foundation and the Tennessee Arts Commission.

The Community Foundation exists to promote and facilitate giving in the 40 counties of Middle Tennessee and beyond. It does this by accepting gifts of any size from anyone at any time and by empowering individuals, families, companies, nonprofits, and communities to respond to needs and opportunities that matter. The Community Foundation works with people who have great hearts, whether or not they have great wealth, to craft solutions that reflect their intentions and goals. For more information, call 615-321-4939 or visit www.cfmt.org.