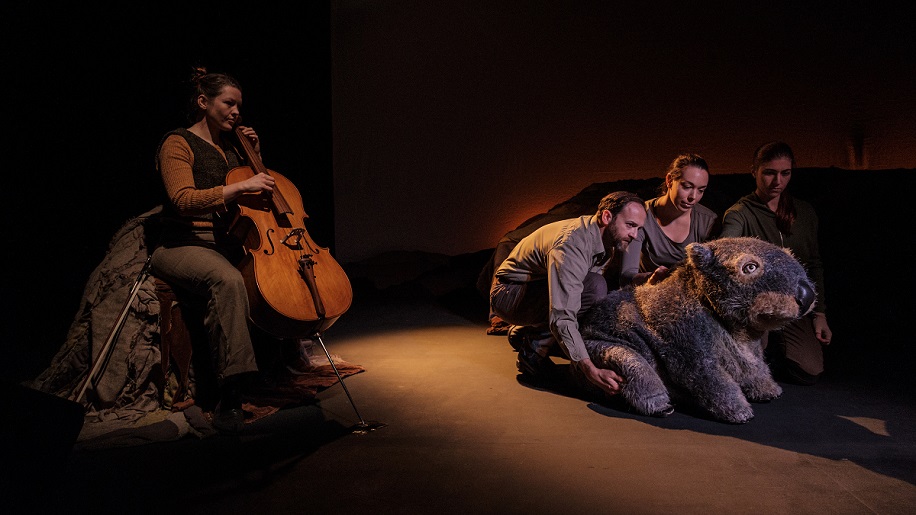 Who knew the performing arts had the power to put out fires 10,000 miles away?

The answer is Monkey Baa Theatre Company, which is presenting a public performance of the new Australian play Diary of a Wombat on March 7.

So, what’s a wombat? And why does it have a diary?

Based on the multi award-winning picture book by Jackie French and Bruce Whatley, Diary of a Wombat uses the magic of puppetry, a live cello score and a brilliant set to help younger audiences consider how we coexist with the nature we inhabit.

“The picture book is 25 pages and in very simple language, but all of it’s just so clever,” says Monkey Baa’s Co-Creative Director Eva Di Cesare. “As soon as I saw the book and heard the story, I knew I wanted to somehow adapt into a show.”

This delightful non-verbal adaptation follows Mothball, the naughtiest wombat in Australia. Bored with her daily routine, this mischievous marsupial goes in search of shelter and food, creating chaos in the lives of the humans around her.

“The deeper angle of this show is human’s relationship with nature and how we both coexist,” Di Cesare continues. “Wombats are a force of nature — a little bit like our bush fires and floods. We have no control of them, and we’re not meant to. That’s what the play’s all about.”

Di Cesare and her fellow Creative Directors Sandie Eldridge and Tim McGarry started Monkey Baa Theatre Company in 1997 “to make sure that even children who lived in the most remote areas of Australia had access to as good quality theater as adults do.”

“We all had children in our lives at the time,” Di Cesare shares. “We wanted to share our love of literature and theatre while creating and showcasing original works.”

Since then, they have grown into Australia’s widest-reaching touring company, adapting over 15 classic Australian stories for the stage — such as Josephine Wants to Dance, Bugalugs Bum Thief, Hitler’s Daughter and The Unknown Soldier.

“What Monkey Baa has done is extraordinary,” says French, the book’s author. “In fact, what they have done is impossible.”

A Monkey Baa patron, animal activist and environmentalist, French says adapting books to the stage for young people “shows kids how ideas and characters can be translated from one art form into another, keeping the essence of the book while refining it.”

“It makes kids think as well as feel,” French explains. “It’s an adventure of the mind and spirit.”

For Di Cesare, it’s no question where her passion for making sure children have access to quality storytelling comes from.

“My parents were migrants who came to Australia from Italy to make a better life for my brother and me,” Di Cesare says. “They spent a lot of time working long hours, so I didn’t really get to go to theater very much.”

Instead, Di Cesare says it was her father “who showed that sharing stories is where our common humanity exists.”

“He would tell stories constantly,” Di Cesare says. “I remember watching him with his friends laugh and laugh as he carried on. He really inspired me to become the storyteller I am today.”

So, how does one tell a story like Diary of a Wombat without using words?

“We thought about how to go about depicting her feelings and her voice, and I kept coming back to a cello in my head,” Di Cesare explains. “We worked with an amazing composer and she came up with this genius score that could translate so many actions — digging, eating, joy, movement, stillness, sleeping and more. It’s pretty amazing what Oonagh was able to pull off.”

In addition to Di Cesare, the production features a team of revered creatives including accomplished cellist and composer Oonagh Sherrard, puppetry and movement director Alice Osborne and designer Imogen Ross.

The public performance at TPAC will feature Michael Cullen, Julia Ohannessian and Shondelle Pratt with cellist Mary Rapp also acting as the voice of Mothball.

But for Di Cesare, she’s just excited to travel above the equator to a place she’s never been — Music City.

“It will be my first time in Nashville and as a huge Dolly Parton and Elvis fan,” Di Cesare exclaims. “I can’t begin to tell you how excited I am.”

All proceeds from this performance will go to WIRES (Wildlife Information, Rescue and Education Service, Inc.), Australia’s largest wildlife rescue organization, which has been rescuing and caring for wildlife for over 30 years. WIRES is operating in all the fire areas in Australia. For more information or to make an additional donation, visit https://www.wires.org.au.

Can you dig it?

Tickets for Diary of a Wombat start at $10 and are on sale now at TPAC.org, by phone at 615-782-4040 and in person at the TPAC Box Office, 505 Deaderick St., in downtown Nashville. The show is appropriate for audiences ages 3+.