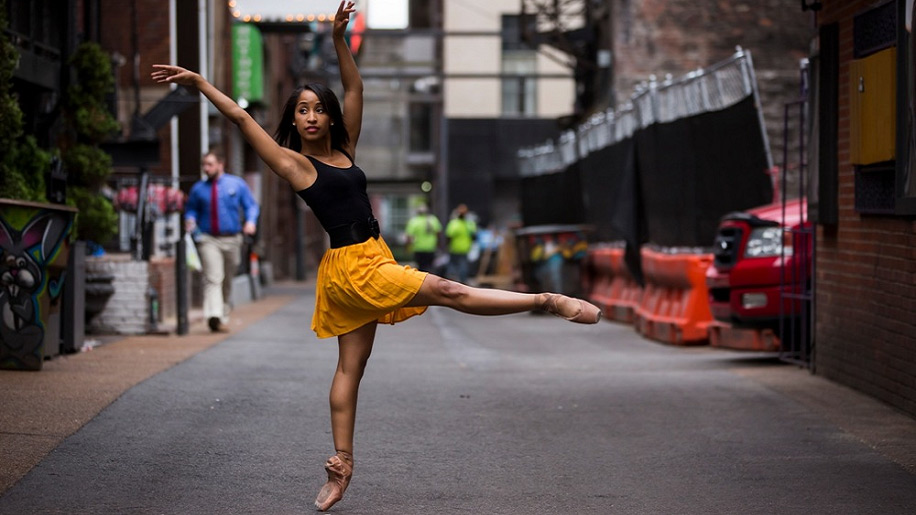 “I am profoundly grateful to have found a home in such a vibrant artistic community.”

The Sugar Plum Fairy and Snow Queen in Nashville’s Nutcracker, Juliet in Romeo and Juliet and Cinderella in Cinderella — few have kept Music City on its toes more than Nashville Ballet company dancer Kayla Rowser.

She now hangs up her slippers for the last time at the end of the 2019-2020 performance season after over a decade with the award-winning dance company.

“Nashville Ballet has been a wonderful and rewarding place to grow as an artist,” Rowser says. “I am profoundly grateful to have found a home in such a vibrant artistic community.”

Perhaps a perfect example of someone “rising through the ranks,” Rowser has performed with the organization since 2007, first as a trainee in Nashville Ballet’s second company, NB2, before eventually being promoted an apprentice.

Since being promoted to company member in 2010, Rowser has performed other notable roles such as Odette and Odile in Swan Lake, Fortuna in Carmina Burana, Aurora in The Sleeping Beauty and Layla in Layla and the Majnun.

But for Rowser, her time with Nashville Ballet is less about the pirouettes she’s done, and more about the friendships and relationships she’s made.

“I will always treasure this time of my life and the bonds I’ve made along the way,” Rowser continues.

Rowser was also featured in Christopher Bruce’s Sergeant Early’s Dream, as the Russian Girl in Balanchine’s Serenade and danced the title role in Nashville Ballet Artistic Director Paul Vasterling’s Firebird. In 2018, Rowser performed as the third movement principal in Balanchine’s Western Symphony, in addition to dancing in Jiří Kylián’s Sechs Tanze and as a principal in Christopher Wheeldon’s Ghosts.

In 2019, Rowser premiered the role of Lucy in Vasterling’s internationally-acclaimed Lucy Negro Redux. For Vasterling, he’s just proud to have been a part of this talented dancer’s blooming career.

“Kayla represents everything that Nashville Ballet stands for-she exemplifies strong technique, grace, and professionalism, and throughout her career she’s always shown a passion for connecting with our audience and sharing her craft with others,” Vasterling says. “She’s given us so many superb performances, and we’re all grateful to have been a part of her career.”

During her tenure with Nashville Ballet, Rowser has been named one of Dance Magazine’s “Top 25 to Watch” and has been featured in Pointe Magazine, The Washington Post and Huffington Post. She has performed in the Kansas City Dance Festival, Spoleto Dance Festival and Spring to Dance in St. Louis.

In 2015, Rowser was awarded the Individual Artist Fellowship by the Tennessee Arts Commission in 2015 for her artistic achievements. When not rehearsing or performing, she enjoys teaching ballet to young students and accepted an invitation to teach master classes at Yale University.

Rowser is currently pursuing a bachelor’s degree in Communications. Upon retirement, she plans to remain in Nashville with her husband, Nick Tazik, while focusing on her studies.

“I am excited to see what the next chapter of life holds,” she says.

Fans are encouraged to send Rowser their well wishes with the hashtag #FarewellKayla on social media; they can also tag her on Instagram @kaylarowser.

Two opportunities remain to see Rowser on the main stage. She will perform in Attitude: Other Voices, Feb. 14-16 and in Modern Masters, April 24-26. Additionally, Rowser will perform during Nashville Ballet’s choreographic workshop series, Emergence, May 14-17.

To purchase tickets to see Rowser before she retires, visit NashvilleBallet.com or call 615-782-4040.