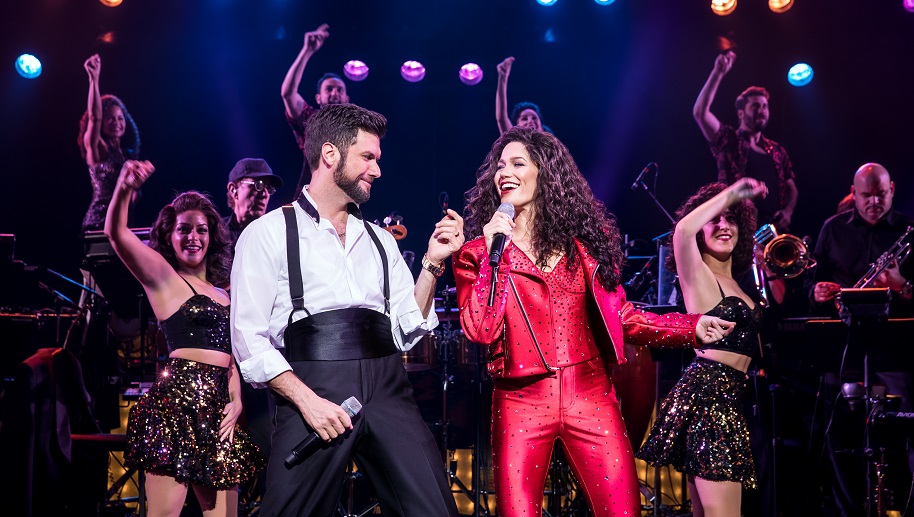 On Your Feet! is an in depth look at the lives and careers of Gloria and Emilio Estefan. The musical takes audiences along on the Estefans’ journey to superstardom, from the heart of Havana to the streets of Miami and everywhere in between. Emilio and Gloria Estefan together have won 26 GRAMMY Awards® – but their music is only half the story. The pair face hardship and triumph as they navigate what becomes a cultural phenomenon, unlike anything that the music industry had ever seen. The story of the Estefans is a big one to take on, but Christie Prades and Mauricio Martinez embody the dynamic and groundbreaking couple perfectly.

Prades says that Gloria was a “role model” for her when she was growing up.

“My mom has all of her albums, and played her music all the time. And she would tell me, ‘Gloria is just like us.’ Gloria was the example that you can do anything.”

For Prades, performing began at a young age with voice and dance lessons while growing up in Miami. She auditioned for the Actors’ Playhouse 2013 production of In the Heights.

“I went in to the dancer audition, and for the second cut, I had to show I could sing,” she says. Director David Arisco and choreographer Stephanie Klemmons were stunned. “They said, ‘You came in for the dancer call? We see something different.’ And they asked me to play Vanessa. And doing that role, I thought, ‘Wait a minute. I can do all these things I’m passionate about at the same time.’”

Prades auditioned for On Your Feet! six months into the show’s Broadway run, and was cast as a swing as well as a cover for the role of Gloria. After the tour was announced, members of the Broadway company participated in showcases in various cities.  At the conclusion of a showcase on February 6 at the Arsht Center, Gloria Estefan came out onstage and asked Prades if she would like to lead the national tour.

“I was in complete shock,” she says. “It didn’t seem real. I’m forever grateful to Gloria and Emilio for giving me this experience. I’m so happy to share their story around the nation, and it’s an understatement when I say I feel deeply honored to portray this incredible woman.”

Martinez says that Gloria’s career has served as inspiration to him as well.

“I grew up in Monterrey, which is a very Americanized part of Mexico. We’re very close to Texas, where I spent my summers. When Gloria started to record those beautiful ballads both in Spanish and English, I didn’t understand the reason at first. But as I grew up, I was so thankful that she existed, because every time I would listen to her, I would think, ‘Thank God somebody else lives like me, in two languages.’ So she inspired me to pursue my dreams in both languages. And now I’m playing her husband.”

Martinez is a big star in Mexico, where he has distinguished himself onstage, on film, on television and as a recording artist. But Broadway had been a goal since he first went to New York when he was 18 to study at the American Musical and Dramatic Academy.

“I was formed in New York as an artist,” says Martinez. “Life took me back to Mexico, but I’ve dreamed of being on Broadway. I’ve learned to be patient, to wait and savor the moment,” he continues. “I couldn’t have had a better role and a better show to make my Broadway debut and to take on the road. Playing Emilio Estefan, an immigrant who had to leave his country and dreamed big about making it in the entertainment industry, is very powerful. I think this story talks to everybody – not just to every immigrant, but every person that has had the courage to pursue a dream and fight for it. No other Broadway show would have meant the same to me.”