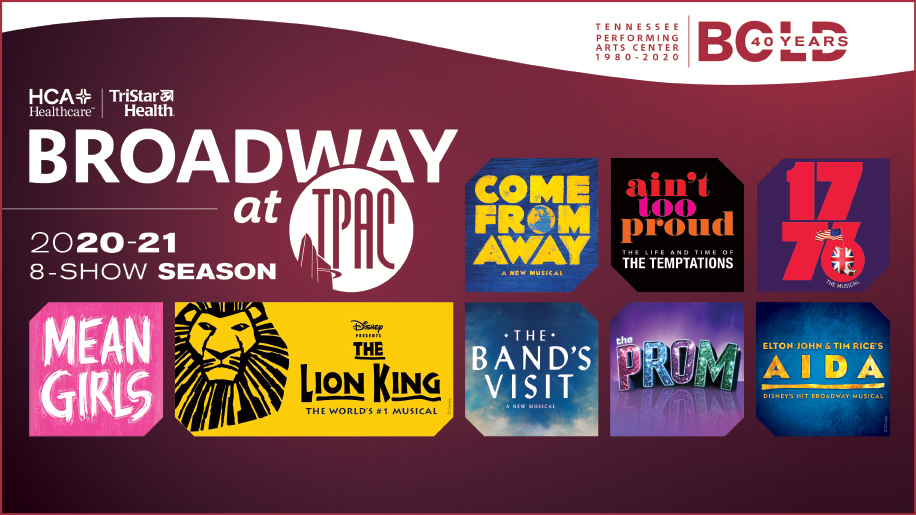 Lions, and Frenchmen, and cod… Oh my!

Buyi Zama as “Rafiki” in ‘The Lion King’ (Photo by Deen van Meer).

“This season is alive with a remarkable energy,” says TPAC President and CEO Jennifer Turner. “TPAC’s creation 40 years ago was a catalyst for our performing arts community, and we’re excited to chart a new course for the future with a renewed commitment to providing high quality arts entertainment.”

The 2020-21 season and special presentations feature seven Nashville premieres including Come From Away, a New York Times Critics’ Pick; Ain’t Too Proud – The Life and Times of The Temptations, the electrifying new musical that follows The Temptations’ extraordinary journey from the streets of Detroit to the Rock and Roll Hall of Fame; a re-imagining of the Tony Award-winning musical 1776 prior to its Broadway engagement at Roundabout Theatre Company; Mean Girls, the hilarious hit musical from the award-winning creative team of Tina Fey, Jeff Richmond, Nell Benjamin and Casey Nicholaw; The Band’s Visit, the critically-acclaimed smash hit musical winner of 10 Tony Awards including Best Musical; the Drama Desk Award winner for Best Musical The Prom, a new musical comedy about big Broadway stars on a mission to change the world; and What the Constitution Means to Me, the 2019 Tony-nominated Best Play and Pulitzer Prize finalist by famed writer Heidi Schreck.

Back by popular demand are Les Misérables, the enthralling story of broken dreams and unrequited love, passion, sacrifice and redemption and Elton John and Tim Rice’s AIDA, a retelling of the passionate and timeless “love story written in the stars” for today’s audience.

“This year’s season features almost 40 Tony Awards between all the shows,” Turner continues. “So yes, we want to bring Nashville award-winning productions, but we also want to showcase heartfelt and moving stories that make you think.”

In addition, season ticket holders are entitled to exclusive benefits:

“We can’t think of a better way to launch our 4oth anniversary than with a full year of fresh, spirit-lifting and thought-provoking Broadway productions,” Turner says. “Truly, the best is yet to come.”

Single tickets for individual shows will go on sale closer to their performances. For more information on the 2020-21 HCA Healthcare / TriStar Health Broadway at TPAC season, visit TPAC.ORG/Broadway or visit the TPAC Box Office at 505 Deaderick St.

Broadway’s Come From Away is a Best Musical winner all across North America! This New York Times Critics’ Pick takes you into the heart of the remarkable true story of 7,000 stranded passengers and the small town in Newfoundland that welcomed them.

Cultures clashed and nerves ran high, but uneasiness turned into trust, music soared into the night, and gratitude grew into enduring friendships.

Don’t miss this breathtaking new musical written by Tony nominees Irene Sankoff and David Hein, and helmed by this year’s Tony-winning Best Director, Christopher Ashley. Newsweek cheers, “It takes you to a place you never want to leave!”

Ain’t Too Proud is the electrifying new smash-hit Broadway musical that follows The Temptations’ extraordinary journey from the streets of Detroit to the Rock & Roll Hall of Fame.

The winner of the 2019 Tony Award for Best Choreography, it’s a thrilling story of brotherhood, family, loyalty and betrayal during a decade of civil unrest in America.

Set to the beat of the group’s treasured hits — including “My Girl,” “Just My Imagination,” “Get Ready,” “Papa Was a Rolling Stone” — Ain’t Too Proud tells the unforgettable story of the legendary quintet that Billboard Magazine named the greatest R&B group of all time.

1776 is a musical based on the events surrounding the drafting and signing of the Declaration of Independence.

They knew they would make history, but not what history would make of them. Fed up with living under the tyranny of British rule, John Adams attempts to persuade his fellow members of the Continental Congress to vote in favor of American Independence and sign the Declaration. But how much is he willing to compromise in the pursuit of freedom? And to whom does that freedom belong?

Direct from the American Repertory Theater at Harvard University, visionary director Diane Paulus reexamines a pivotal moment in American history in this re-imagining of the 1969 Tony Award-winning musical 1776, prior to its Broadway engagement at Roundabout Theatre Company.

Cady Heron may have grown up on an African savanna, but nothing prepared her for the vicious ways of her strange new home: suburban Illinois.

Soon, this naïve newbie falls prey to a trio of lionized frenemies led by the charming but ruthless Regina George. But when Cady devises a plan to end Regina’s reign, she learns the hard way that you can’t cross a Queen Bee without getting stung.

More than 100 million people around the world have experienced the phenomenon of Disney’s The Lion King, and now you can, too, when Nashville’s best-loved Broadway blockbuster returns to Nashville.

Winner of six Tony Awards — including Best Musical — this landmark musical event brings together one of the most imaginative creative teams on Broadway.  Tony Award-winning director Julie Taymor brings to life a story filled with hope and adventure set against an amazing backdrop of stunning visuals.

The Band’s Visit is the winner of 10 Tony Awards — including Best Musical — making it one of the most Tony-winning musicals in history.

In this joyously offbeat story, set in a town that’s way off the beaten path, a band of musicians arrive lost, out of the blue.  Under the spell of the desert sky, and with beautiful music perfuming the air, the band brings the town to life in unexpected and tantalizing ways.  Even the briefest visit can stay with you forever.

With a Tony and Grammy-winning score that seduces your soul and sweeps you off your feet, and featuring thrillingly talented onstage musicians, The Band’s Visit rejoices in the way music makes us laugh, makes us cry, and ultimately, brings us together.

The Prom is a new musical comedy about big Broadway stars on a mission to change the world and the love they discover that unites them all.

Everyone’s invited to the joyous Broadway hit that New York Magazine hails as “smart and big-hearted” while The New York Times declares it “makes you believe in musical comedy again!”

Variety raves, “It’s so full of happiness that you think your heart is about to burst.” And The Hollywood Reporter cheers, “It’s comic gold!”

A love story written in the stars — the winner of four Tony Awards returns to Music City.

With a Grammy and Tony Award-winning score by the legendary Elton John and Tim Rice, the hit Broadway musical AIDA returns in this thrilling new production reinterpreted for today’s audiences by the original Tony Award-winning creative team.

From the producers of The Lion King and Frozen comes a compelling tale of star-crossed lovers belonging to feuding nations. Through the stirring contemporary score and a timeless and powerful love story, AIDA reveals that we have the power to change history, but only when we make brave choices and embrace our destiny.

The new Aida is directed by Schele Williams (a member of the original Broadway cast) and choreographed by Tony-nominee Camille A. Brown. The New Yorker says, “Disney’s done it again!”

WHAT THE CONSTITUTION MEANS TO ME

Direct from Broadway, the 2019 Tony-nominated Best Play and Pulitzer Prize finalist What the Constitution Means to Me by famed writer Heidi Schreck arrives in Nashville for a strictly limited engagement.

Fifteen year old Heidi earned her college tuition by winning Constitutional debate competitions across the United States. In this hilarious, hopeful and achingly human new play, she resurrects her teenage self in order to trace the profound relationship between four generations of women and the founding document that shaped their lives.

This boundary-breaking play breathes new life into our Constitution and imagines how it will shape the next generation of Americans.

Schreck’s timely and galvanizing play — directed by Oliver Butler — became a sensation off-Broadway last fall before transferring to Broadway where it received two Tony Award® nominations among countless other accolades.

See the play The New York Times hails as “not just the best play on Broadway, but also the most important.”

Set against the backdrop of 19th-century France, Les Misérables tells an unforgettable story of heartbreak, passion, and the resilience of the human spirit.

Featuring the beloved songs “I Dreamed A Dream,” “On My Own,” “Stars,” “Bring Him Home” and “One Day More,” this epic and uplifting story has become one of the most celebrated musicals in theatrical history.

With its glorious new staging and dazzlingly reimagined scenery inspired by the paintings of Victor Hugo, this breathtaking new production has left both audiences and critics awestruck, hailed as the “Les Miz for the 21st Century.”