Home > News Center Stories > ‘The Book of Mormon’ started as ‘Oklahoma!’ but with Joseph Smith – Q&A with creators Trey Parker and Matt Stone

‘The Book of Mormon’ started as ‘Oklahoma!’ but with Joseph Smith – Q&A with creators Trey Parker and Matt Stone 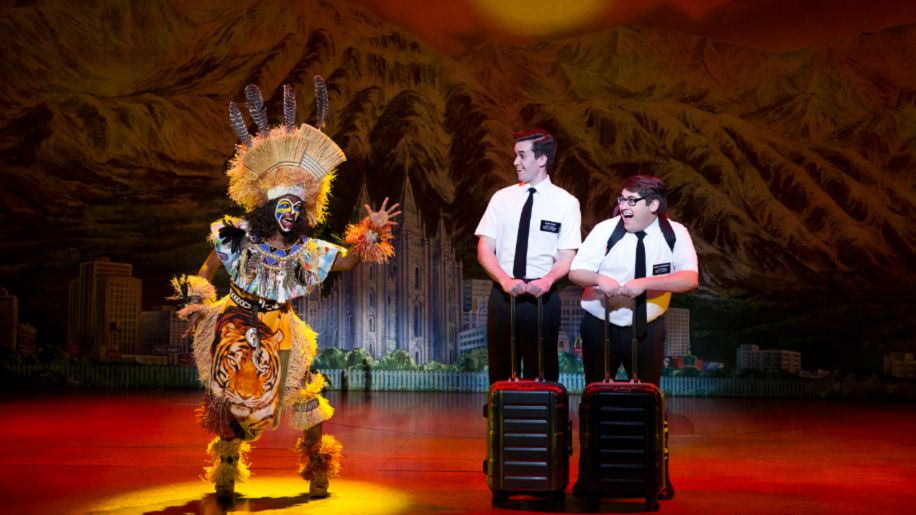 Creators of South Park and The Book of Mormon Trey Parker and Matt Stone sat down with Limelight Magazine to discuss coming up with the idea for the show and “conducting research” on a trip to Utah.

Q: Numerous Mormon characters and plots have been featured in your long-running animated comedy, South Park, and even more prominently in your 1997 film Orgazmo – a superhero movie in which a Mormon missionary becomes entangled in the LA pornography industry. So what is it that keeps you coming back for more?

Q: You started development of THE BOOK OF MORMON after meeting Robert Lopez at a performance of Avenue Q, the award-winning puppet musical and Sesame Street send-up Lopez wrote with Jeff Marx, back in 2003. Where did you go from there?

PARKER: It really started as ‘let’s do a musical about [founder of Mormonism] Joseph Smith. Let’s do covered wagons and all that stuff – do Oklahoma!, basically, but with Joseph Smith.

Q: But it wasn’t until the three of you took a trip to Salt Lake City – started by the Mormons and home to the headquarters of the Church of Jesus Christ of Latter Day Saints – that the idea really began to take shape, right?

PARKER: Bobby had never been to Salt Lake City. We went to a museum and we saw Joseph Smith’s death mask – it was like looking at Joseph Smith. We started to realize we should do a somewhat more modern story.

The Book of Mormon Touring Cast

Q: You must have had to do some research during your trip to Salt Lake City. In addition to museums, did you visit with locals and in turn find inspirations for characters?

PARKER: In that same trip we started talking to Mormon missionaries. Talking to those kids it just so immediately became obvious, that’s the story to tell: some kid who’s born and raised in Salt Lake, has done everything right, done everything he’s told to do, and then goes and gets a dose of the real world.

STONE: If you go to downtown Salt Lake City and you just go to a restaurant and order food and the waiter comes up, ask the waiter if they’ve been on a mission. And it was like most of the time they had. At the time we talked for a little while about, ‘well maybe it’s about a kid who’s gay.’

PARKER: They bring a guy over and we’re like, ‘we’re wondering if there’s someone you know who’s a Mormon missionary but was gay,’ And he goes, ‘How many do you want?’

STONE: And then we met a kid who – less funny – he’d gone to Cambodia, and seen somebody get stoned to death or something really horrific and had a freakout and come back home.

Q: And that’s where your story line started?

PARKER: That got us thinking about the fish out of water story of a kid who grows up in this really nice situation and just believes everything he’s told, and then you put him in a place that is really tough – sub-Saharan Africa. And nothing he’s learned is applicable at all.

STONE: Because they’re missionaries they’re always paired together. That gives us an instant little buddy thing. That’s when we kind of hit on it. It just goes back to Salt Lake City.

Q: Robert Lopez is known as a composer for his work on Avenue Q and more recently his music for the Disney film Frozen, but you both have an impressive list of musical credentials as well. You worked on a film together called Cannibal! The Musical – a song-and-dance bio-pic about Alfred Packer, an American prospector accused of cannibalism in the Colorado mountains. And your 1999 film South Park: Bigger, Longer, Uncut is also musical – right down to a Les Miserables/West Side Story-style finaletto before the final act. So the music really came from all three of you?

PARKER: I grew up with Oklahoma! and Sound of Music. When I was a little kid and we had to go rent it on VHS or whatever, it was just so from another time. And everyone seemed so damn happy. It was almost like watching Monty Python. I would watch these musicals and be like, ‘this is not even Earth.’

Q: Was it from watching these old musicals that you began to learn about music? Did you teach yourself, or did either of you go to school for it?

Q: For Team America: World Police the music came later on in the process, but how about for Book of Mormon?

PARKER: We thought of it as ‘who knows if we’ll ever make this thing, but let’s just make the album.’ We would get together in recording studios – I had one at my house at the time – and we would just sit there and talk about something and come up with a song and then record that song. We’d all play; Matt would play drums and I’d play piano or Bobby played piano and I’d sing and we’d all sing. It was like being in a band.

STONE: Those first few years it really was like we were a band and we were just trying to write songs. That’s I think why it ended up working, too – we wrote the songs first. We wanted to be able to tell the story with the songs. Not just, ‘Here’s a story, let’s figure that out, and now let’s go find some songs to sing to make it a musical.’ Musicals do that a lot, it bugs me so much.

Q: Given the subject matter of the show, it remains a distinctly American musical – but if someone didn’t know much about Mormons, how do you explain the show’s international success?

PARKER: In the UK we realized people didn’t need to know anything about Mormons, because they just said: ‘Well, that’s just Americans.’

STONE: It’s a caricature of a certain kind of Americanness. You know, naively going around the world and helping you understand what you need to know.

Q: In light of the show’s successful run, would you consider making another stage musical?

STONE: If we had an idea, Orgazmo?

PARKER: If we had seven years. We wouldn’t want to do our Miss Saigon. It really does take that long. Because I think you have to do an album first. You have to start with songs. And if the songs start really speaking to you and telling a story then you know you’ve got something.

Q: Are you surprised by the show’s success?

STONE: We’ve lived the ultimate Broadway dream. We thought it was good and we were psyched to put it on in New York and we wanted it to be a success – we definitely believed in it. But we thought success would be: we did it. It opened. We got some OK reviews.