Home > Casting announced for ‘May We All: A New Country Musical’ at TPAC

Casting announced for ‘May We All: A New Country Musical’ at TPAC 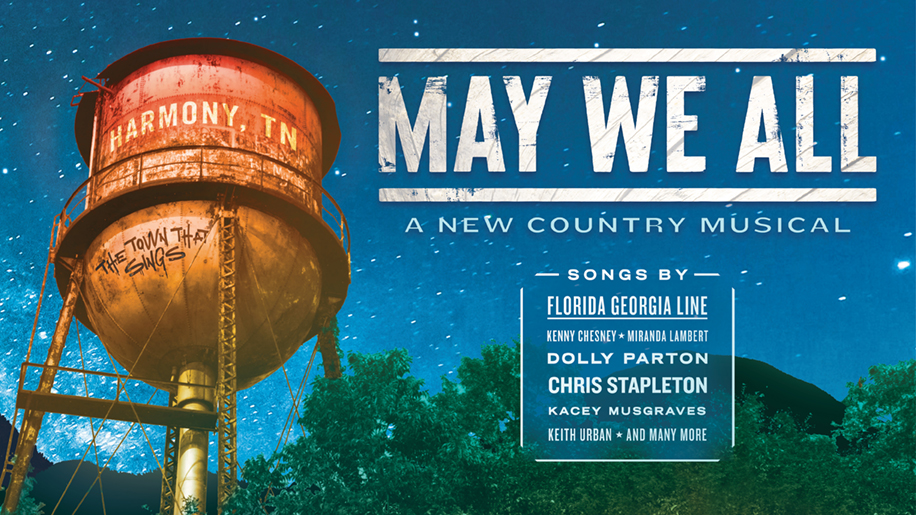 Lively McCabe Entertainment (Executive Producer Michael Barra) and CuzBro Productions – the production company founded by Brian Kelley of the multi-platinum, award-winning duo Florida Georgia Line announced the casting for the World Premiere of the highly-anticipated May We All: A New Country Musical at TPAC’s Polk Theater June 7 – July 17.

May We All is the story of Jenna Coates (Bligh Voth), a small-town girl whose big-city singing career is over before it even begins, and how she returns to the people and the places of her past to find a path to the future. But going home is never easy. A lot has changed in Harmony, Tennessee, since Jenna left, and not necessarily for the better. If Jenna and Harmony are going to dig themselves out of their current crises, they’re going to need each other. And they’re going to need music.

May We All was originally developed and produced at Playhouse on the Square in Memphis, Tennessee, (Michael Detroit, Executive Producer) and produced by special arrangement with Lively McCabe Entertainment, BMG Music, CuzBro Productions and Big Blue Truck Music.

Patsy Detroit (Kylie Coates) is honored to be a part of this world premiere in her home state of Tennessee! Patsy recently graduated from CUNY’s Baccalaureate program in New York City studying musical theatre. In addition to originating the role of Kylie in May We All at Playhouse on the Square in Memphis, Tennessee, other credits include Emmy in “A Doll’s House Part Two,” Libby in “American Idiot,” Ensemble in “Hairspray” all at Playhouse on the Square; Little Sally in “Urinetown,” Amy in “Dry Land”; Little Red in “Into the Woods” all at CUNY City College, New York City).

Lauren “LOLO” Pritchard (Liz) Broadway: Ilse in “Spring Awakening” (OBC). LOLO is signed with Sony Music Publishing and has released three full-length albums: “Wasted In Jackson,” “In Loving Memory Of When I Gave A Shit”, and “X.” LOLO was nominated for a Grammy Award for her songwriting work on Panic! At The Disco’s hit album “Death Of A Bachelor.” She is also a co-writer of the global hit, “High Hopes.” LOLO is the composer and lyricist of the country/folk musical “Songbird,” debuted at 59E59 Theater (book by Michael Kimmel, New York Times Critic’s Pick). To Xander, Colton and my extended family: thanks for your love and support! lolomusic.com

Miles Aubrey (Earl) has been seen on Broadway in “Jersey Boys” (Norm Waxman) and “Ring of Fire.” Regional theatre includes Goodspeed, Casa Mañana, North Shore Music Theater, Flat Rock Playhouse, The Ryman, and others. TV and film includes Charlie Calello in “Jersey Boys” (dir. Clint Eastwood), “Fatal Attraction,” Comedy Central, and performances on “The Tony Awards,” “The Tonight Show,” “The Today Show,” and “Seth Meyers.” Miles is a sought-after touring and session musician, performs regularly on the Grand Ole Opry, and is endorsed by guitar companies such as Taylor, Reverend and PRS. Miles is proud to be the lead guitarist and band music director for Broken Bow artist Brooke Eden.

Peri Barnhill (Tammy). Peri, a graduate of Belmont University with a BFA in Musical Theatre, was seen in “Young Frankenstein” as Inga (Hendersonville Performing Arts Center), “Little Shop of Horrors” as Audrey (Renaissance Players), and was part of the 2020 Nashville Shakespeare Apprenticeship program. She’s forever grateful to her friends and family for their love and support and would like to thank all those involved in May We All. Instagram: @tinyevilgenius

Gina de Pool (Suzanne/Dance Captain). Gina is a native to south Florida and a graduate of The Boston Conservatory. Film credits include “Spirited” (coming 2023) Apple TV, “In The Heights” (Warner Brothers), “Isn’t it Romantic” (Warner Brothers). Theater credits include “West Side Story” (Milwaukee Rep), “On Your Feet” (The Muny & Starlight Theater), “Cinderella” (The Fulton Theater). Thank you to family and friends for your love and support. Instagram: ginadepool

Mary Kate Hughes (Stephanie) is thrilled to be returning to the TPAC stage this summer! A graduate of Belmont University, some of her previous credits include “Evita” (Studio Tenn and TPAC), “Cabaret” (The Palace Theater), “The Wizard Of Oz” (The Palace Theater), and several original works staged at The American Music Theater. Most notably, she co-produced and starred in “Natural Woman: The Music of Carole King,” a self-accompanied rock concert of King’s greatest hits. Hughes is endlessly grateful to her parents and three sisters and sends all her love home to Sam, Otie, and Ember! Website: marykatehughes.com. Instagram @mary.kate.hughes

Ashlyn Inman (Ru Ann) is thrilled to be a part of May We All! Her previous credits include “Something Rotten!” (Portia), “The Full Monty” (Georgie), and “Fun Home” (Medium Alison). She received her BFA in Musical Theater at Coastal Carolina University and is currently working toward her MFA in creative writing at Fairleigh Dickinson University. Website: www.ashlyninman.com, Instagram: @ashwednesdays

Josh Jordan (PJ) is a proud native of Nashville. A multitasker at heart, he was excited to discover at a young age that you could sing, dance, and act all at once. After being awarded Best Male Dancer at the Spotlight Awards in 2019, Josh is thrilled to be returning to the TPAC stage for the regional premiere of May We All. As a rising junior in the Musical Theater BFA program at Belmont University, he recently played the role of Jesus in “Godspell” and was featured in the ensemble of “Urinetown.” He is grateful to his mentors for preparing him for his first professional show. Instagram: @joshthejordan

Chelsea “Solace” Hough (Ruby). Born in Los Angeles but reared in Nashville, Solace is an Atlanta-based dancer, singer, actor, and choreographer. Solace has toured domestically and overseas and has appeared on television, award shows and commercials, including being in the Top 10 of Season 15 on “So You Think You Can Dance.” She has also performed with various artists, including but not limited to: Taylor Swift, Mary J. Blige, Pitbull, Thomas Rhett, Kristin Chenoweth, Pam Tillis, etc. Solace is thrilled to take part in building May We All and is looking forward to the memories made along the way!

Macy Watts (Angie). Texas native, graduated from WTAMU with a major in Musical Theatre. Upon graduation, she went on to perform professionally for two years before deciding to move to Nashville in February 2022. Some credits include two national acting awards, recording for Disney, and roles such as Doralee in “9 to 5,” Matron Mamma Morton in “Chicago,” and Missy in “Marvelous Wonderettes.” Macy is extremely excited to make her TPAC debut and would like to thank her family and friends for their constant support.

Brian Kelley (Producer). Best known as the Florida half of the record-setting superstar duo Florida Georgia Line, Ormond Beach-native Brian Kelley is now embarking on a sandy solo adventure. Making a splash with debut album, “Sunshine State Of Mind,” the chill-Country champion is capturing his lifelong connection to the Florida coast. Co-writing and co-producing the project alongside Corey Crowder for an elevated version of his typical party-ready FGL energy, the set matches Kelley’s anything-goes ethos with a new sunshine-Country strut, as a partnership between Warner Music Nashville and Kelley’s Nashville South Records, Inc. It’s the latest piece of a creative empire which has already made Kelley and his FGL partner, Tyler Hubbard, one of the best-selling Country duos in history, and true business moguls. Alongside a chart-topping catalog that includes 2020’s “Life Rolls On” (BMLG Records), 19 career #1 hits, and being the only act to achieve two RIAA DIAMOND-certified singles in Country music history (“Cruise” and “Meant to Be” with Bebe Rexha), the pair maintain thriving business initiatives in addition like FGL House, meet + greet, Round Here Records, Tree Vibez Music, Old Camp Whiskey, and Wolf Moon Bourbon (with Jason Aldean), plus a reputation as electrifying, stadium-thrilling headline performers. Diversifying his enterprise, Kelley is also hands-on with projects like upcoming musical and feature film, both titled May We All with his production company CuzBro Productions; cult-favorite brand Tribe Kelley with wife Brittney; and a partnership with Oyster City Brewing Company.

CuzBro Productions (Producer). A creative powerhouse emerging in television and film production, CuzBro Productions was formed as the brainchild of Florida Georgia Line’s Brian Kelley (Co-Founder and Principal) and his cousin, actor Stephen Snedden (Co-Founder and President of Production), with writer Justin Halliwell serving as Partner and President of Development. Rooted in hard work, passion, and authenticity, CuzBro Productions is dedicated to conveying compelling original stories and creating vivid, authentic worlds with inspired programming that speaks to the heart and humanity of all viewers. Represented by WME, the newly launched company has several television and film projects already in the works, with details expected to announce soon.

Lively McCabe Entertainment (Producer). Led by producer Michael Barra, this global live stage production company specializes in packaging and adapting iconic intellectual property into new stories for theater, film, and television. Projects include the stage adaptation of Clue – which is currently the most-produced play in the U.S. – based on the iconic Paramount Pictures film and Hasbro board game. Other projects include the stage musical adaptation of the MGM film “Mystic Pizza,” the musical “Punk Rock Girl,” with a book by Joe Iconis (“Be More Chill”) in partnership with BMG and featuring artists such as Blondie, Avril Lavigne, Pat Benatar, Joan Jett, and Gwen Stefani, and multiple television projects based on music IP set for this season. Visit www.livelymccabe.com.