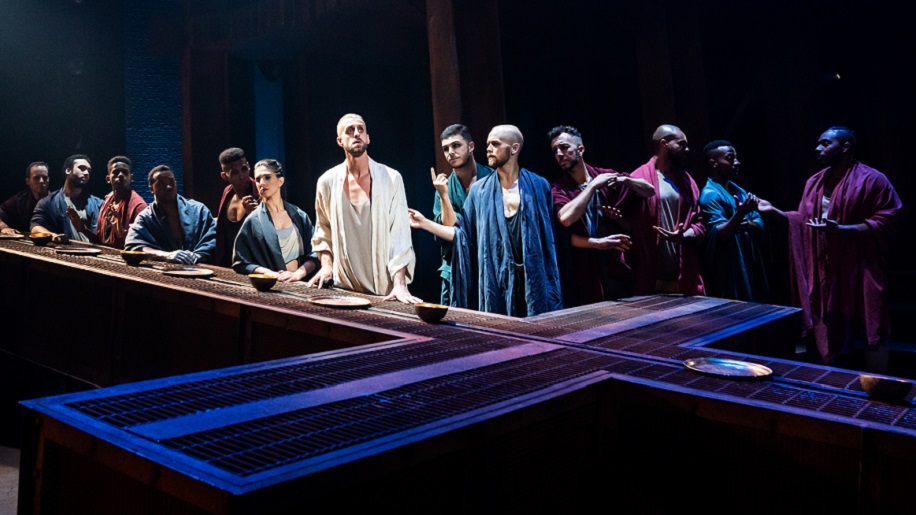 How do you modernize a musical written 50 years ago based on events that took place 2,000 years ago?

The year was AD 1970 when then-unknown writers Andrew Lloyd Webber and Tim Rice penned a rock opera that would have biblical effects on the world of musical theater.

But when they wrote Jesus Christ Superstar five decades ago, they were just Andrew and Tim — a couple of young, hungry songwriters (both still in their early 20s) who took a “leap of faith” in bringing rock ‘n’ roll energy to the Broadway stage.

Since then, millions have seen some sort of stage version. Some may have even caught NBC’s Emmy Award-winning 2018 live performance with John Legend, Alice Cooper and Sara Bareilles.

The music and mayhem of this Olivier Award-winning Regent’s Park Open Air Theatre production all revolve around the final days of Jesus’ earthly life — from his time with his disciples to his conflicts, persecution and crucifixion.

Audiences see the story told through the eyes of Jesus’ disciple Judas, also hearing the vantage points of Jesus, Mary Magdalene, and the high priest antagonists who feel threatened by Jesus’ skyrocketing popularity. It all leads to a dramatic scene between the apprehended and on-trial Jesus and the governor of Judea, Pontius Pilate, who orders Jesus’ crucifixion to appease the bloodthirsty mob that’s turned against the man they initially treated as their savior.

The man set to bear the cross, Aaron LaVigne, has a coincidentally close relationship with the show.

“One of the first times I acted on stage was when I was 18 years old, our high school theater teacher approached me to audition for Jesus Christ Superstar,” Lavigne says. “I played Judas, and the music hooked me right away.”

Going from Judas to Jesus has been a long road for Lavigne, but one certainly worth traveling. Lavigne appreciates the irony of auditioning to play the carpenter of Nazareth while simultaneously remodeling a 120-year-old house in his hometown of Cincinnati, Ohio.

“How crazy is that?” Lavigne points out. “I was doing all of this carpentry work finishing up this house and at the exact same time, the show was flying me back and forth for auditions. It’s pretty wild how it all fell into place.”

Aaron LaVigne and the company of the North American Tour of ‘Jesus Christ Superstar.’ (Photo by Matthew Murphy)

“This portrayal really celebrates the music,” Lavigne explains. “Jesus is framed more as a singer-songwriter, which is perfect for me. I even carry a guitar on my back for a lot of the show.

LaVigne says the creative team didn’t shy away from the fact that the musical was first released as a concept album (dubbed “The Brown Album”), they embraced it, paying homage to that original record that had sold more than 7 million copies by 1983.

“We’ve basically lifted the orchestrations from the original brown album,” LaVigne says. “It’s almost like putting a needle on a record player, and you’re starting that record from start to finish. That, combined with the set design and choreography, really give it this concert feel.”

To create a faster-paced production (the show runs 90 minutes without an intermission), director Timothy Sheader downplays the dramatic acting in favor of a concert-style performance. Mics, mic cables and mic stands become important visual icons that fill in for minimal characterizations. For example, the inevitable suicide of Judas ends up being symbolized by a lone mic swaying on a cable over the stage.

“We wanted the movement to echo the core and heartbeat of the show, which is the music,” says Choreographer Drew McOnie (King Kong, In The Heights), “so the dancing within this production lives somewhere between a rock concert and a ballet.”

Though this is certainly a music-driven rock opera, McOnie says dance still has a huge role to play within this show specifically.

“Well, dance has been used for centuries as a way of getting closer to God,” McOnie explains. “It’s the endorphins and the release of joy that you get when you express yourself through movement. So, we wanted to explore elements of dance — like big, boisterous upward motions and prayer gestures — that could connect the audience more deeply to the narrative.”

The show may have its roots in Christian theology, but McOnie reminds audiences that the show offers more than a Sunday School lesson.

“Jesus was a man, and he had something about him that people wanted to follow,” McOnie says. “It’s a story we all know; it’s a human story. Regardless of your faith, it connects with everyone.”

“The quality of all the elements of this show — the music, the dancing, the visuals — are just so impactful and powerful when they’re all put together,” says McOnie on why all of Middle Tennessee should come see this fresh take on a timeless classic. “It can make you cry; it can lift you up. That’s why this show will go on forever.”

So, have you ever felt like the trial of Jesus before the Roman judge Pontius Pilate could have used a bit more pizazz? Then get tickets for Jesus Christ Superstar, running March 3-8, at TPAC.org.

An album that inspired a REVOLUTION.
A REVELATION that changed the world.
A REINVENTION for this millennium.