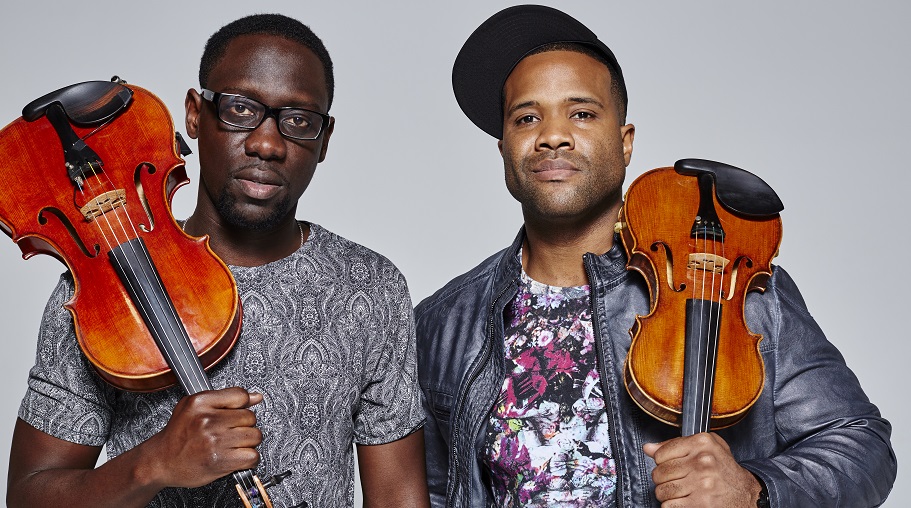 Hip-hop and classical music are two genres that wouldn’t seem to go together yet violist Wil B. and violinist Kev Marcus have combined their classical training and love for hip-hop to create the successful duo, Black Violin.

The pair attended high school together in Fort Lauderdale, Florida. During orchestra class, they would work on their technique and play the required repertoire. Like typical teenagers, after school they would listen to hip-hop music. One day in high school, Kev came to orchestra class and started playing a popular Busta Rhymes song on the violin. Learning popular hip-hop songs on their classical instruments was the spark that led to the formation of Black Violin.

The two continued their training in college – Wil B. To Florida State University and Kev Marcus to Florida International University. After graduating, the pair became roommates and continued experimenting merging the worlds of hip-hop and classical.

Their big break came when the pair performed at the legendary Apollo Theater and won the title of Apollo Legends. To perform and win the hearts of the toughest audience in the world was the moment Kev and Wil knew they had something special. Since then, Black Violin has performed and worked with notable acts such as Alicia Keys, Tom Petty, Kanye West, and Aerosmith, to name a few.

Black Violin’s music is a melting pot of just about every genre you can think of. While mainly a combination of hip-hop and classical, it also has elements of country, blues, and jazz; audiences can expect an experience like no other. Someone who doesn’t like hip-hop might be more open to the genre after seeing Black Violin, while a hip-hop fan in attendance may now be inclined to explore the world of classical music. Because there is something for everyone, Black Violin concerts bring together a diverse group of people to bridge a gap between worlds and be inspired by this unique and talented duo.

Twenty-five string students from local metro schools will join classically trained violist and violinist Wil B. and Kev Marcus of Black Violin at their one-night engagement this week on April 26 at War Memorial Auditorium.