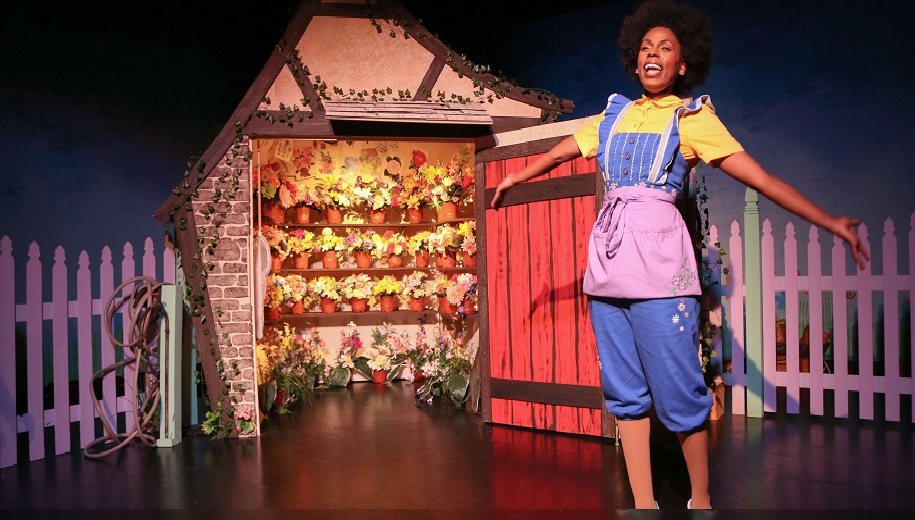 The Itsy Bitsy Spider is perhaps the ultimate story about perseverance and dedication. We all know the story – the spider climbs the spout, the rain washes it out, the sun dries the rain and then it tries again.

I can’t think of a more fitting show for Nashville Children’s Theatre, the oldest professional children’s theater in the United States, who has remained dedicated to providing quality programming for young audiences since 1931.

After numerous sell out dates, NCT has added two weeks to the debut Snuggery show based on the popular finger-play nursery rhyme, extending the show’s run until October 6.

The play follows Marigold and Periwinkle as they lead audience members through an adventurous day of gardening. They plant flowers, deal with rain and meet a certain determined eight-legged hero.

For Ernie Nolan, The Itsy Bitsy Spider’s director and playwright, this show about teaching little ones about the beauty of nature and never giving up.

“Grandfather’s garden provides many examples of the rewards of patience,” Nolan said. “Marigold experiences firsthand (in a theatrically magical kind of way) that plants and flowers take time to grow – they can’t be rushed. With water, soil, and sunlight, flowers blossom when their time is right, just like many things in life.”

Designed for ages 0-5, the performance is a part of NCT’s Snuggery series – an immersive experience that encourages creative participation in very young children. During the show, children are provided with a small collection of props for use at specific times through-out the performance with the help of their adult. At the play’s end, every child receives a packet of seeds to take home.

The Itsy Bitsy Spider cast includes Catherine Birdsong and Tamiko Robinson Steele. Scenic and Lighting Design is by Scott Leathers, with Costume Design by Alarie Hammock and Sound Design by Ernie Nolan who also directs. The production will be Stage Managed by Daniel C. Brewer.

In August of 2018, NCT premiered its first Snuggery show Twinkle, Twinkle, Little Star. During NCT’s 2019-20 season, there will be two Snuggery shows:

The Theatre for the Very Young work created at NCT puts the theater in an international conversation with artists around the globe. Recently, Executive Artistic Director Ernie Nolan was invited to represent the United States and speak to attendees about American TVY practices at the International Festival of Theatre and Culture for Early Years in Bologna, Italy.

Your favorite childhood critter crawls his way onto the NCT stage in this interactive, immersive theatrical experience! Grab your tickets now at nashvillechildrenstheatre.org