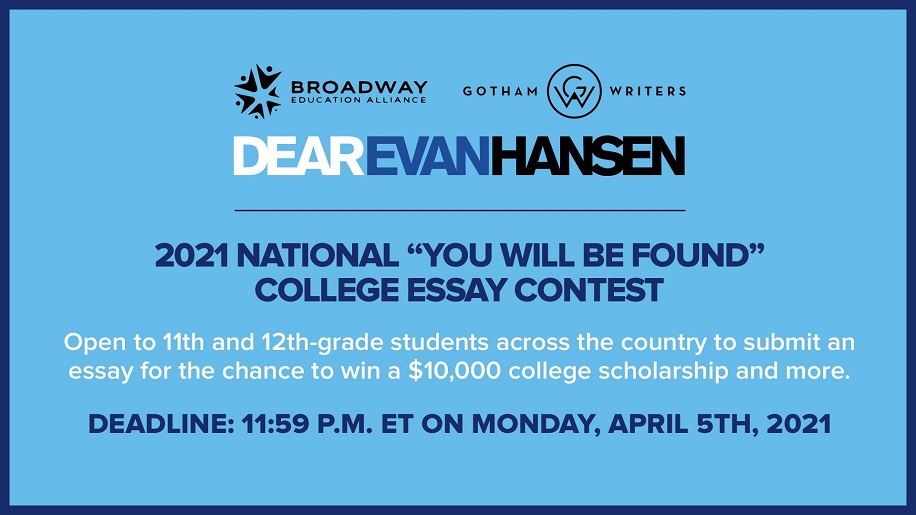 Dear Evan Hansen, along with partners The Broadway Education Alliance and Gotham Writers Workshop, is proud to announce the third annual “You Will Be Found” College Essay Writing Challenge, inspired by the Tony® and Grammy® Award-winning Broadway hit musical. In recognition of the record-breaking National Tour and meeting millions of new fans nationwide, the initiative builds on a contest previously exclusive to the New York City area, and now extends to high school juniors and seniors nationwide with one scholarship of $10,000 awarded to the college of the recipient’s choice.

“The college application process, and the essays that accompany it, have always played a role in Evan Hansen’s story of a young adult coming into his own. It’s what inspired us to create this essay challenge three years ago, and we’re so appreciative of the chance to play a small role in supporting the education of our first two winners,” said Stacey Mindich, lead producer of Dear Evan Hansen. “Now, more than ever, we realize how the past year has impacted the educational experience for students across the country – and how those students have responded with incredible resilience and adaptability. We’re excited that this is the moment we’re able to expand the essay challenge nationwide, and to further lend support to a student embarking on their college journey. We’re hopeful that the year ahead will ultimately find productions like Dear Evan Hansen on track to return to the stage, and students across the country able to get safely back to their classrooms.”

Participating students are asked to respond to the following essay prompt:
Dear Evan Hansen, at its core, is a story about connection. During the past year, connection has never been more integral to our daily lives, yet we find ourselves in a moment where it requires more creativity than ever to maintain. In your essay, describe how you’ve managed to ensure those around you were a little less alone in recent months – or, alternatively, a moment where you yourself have found comfort in connection.

College application-style essay submissions (no more than 650 words) should be specific, have a clear narrative arc, and adhere to the theme of the challenge. Participating students must submit entries online. Upon submitting, participants will also be asked to provide their city, state and zip code so they can be considered for supplemental regional prizes and recognition that may be awarded locally by venue partners.

Contest rules are available at Gotham Writers’ official “You Will be Found” College Essay Writing Challenge page. Submissions must be received no later than 11:59 pm on Monday, April 5. Entries will be judged by members of the Dear Evan Hansen cast and global production teams, experts from Gotham Writers Workshop and Broadway Education Alliance, and education directors and marketing teams from performing arts venues around the country. The winner will receive a $10,000 scholarship to the college of their choice, funded by Dear Evan Hansen lead producer Stacey Mindich. Dear Evan Hansen also looks forward to hosting the challenge winner at the show when the production returns to the stage on Broadway or on tour. The winner of the national challenge will be announced on Monday, May 10.

Declared “One of the most remarkable shows in musical theater history” by the Washington Post’s Peter Marks, Dear Evan Hansen launched its First North American Tour at the Buell Theatre in Denver, Colorado in October 2018 and since, has performed in more than 40 cities across North America playing for more than 1.5 million audience members. The Broadway production of Dear Evan Hansen opened at the Music Box Theatre to rave reviews on December 4, 2016, where it’s broken all box office records and struck a chord with critics and audiences alike. It went on to win six 2017 Tony Awards, including Best Musical, the Drama League Award for Outstanding Musical Production, two Obie Awards, a Drama Desk Award, and two Outer Critics Circle Awards and two Helen Hayes Awards. Recently, the West End Production of Dear Evan Hansen won the Olivier Award for Best New Musical, along with two other Olivier Awards.

Like all Broadway and touring shows in North America, Dear Evan Hansen is currently on temporary hiatus due to the COVID-19 pandemic and looks forward to returning in 2021. The Grammy Award-winning Original Broadway Cast Recording of Dear Evan Hansen, produced by Atlantic Records, was released in February 2017, making an extraordinary debut on the Billboard 200 and entering the chart at #8 – the highest charting debut position for an original cast album since 1961 – and went on to win the 2018 Grammy Award for Best Musical Theater Album.

The Broadway Education Alliance and Gotham Writers, along with Dear Evan Hansen, are presenting the “You Will Be Found” Challenge, recognizing excellence in storytelling and promoting student engagement with Broadway. The challenge is administered by the Broadway Education Alliance and Gotham Writers Workshop, a creative home both in New York and online for writers to develop their craft and come together in the spirit of fellowship and discovery. Gotham is also a leader in college application essay coaching.

The guidelines for this annual contest, including word length and the goal of the essay, align with the Common Application, the undergraduate college admission application that students may use to apply to any of more than 700- member colleges and universities throughout the United States, Canada, China and many other European countries. Students who enter the “You Will Be Found” Challenge will be able to adapt their essay and use it as their personal statements for their college applications.