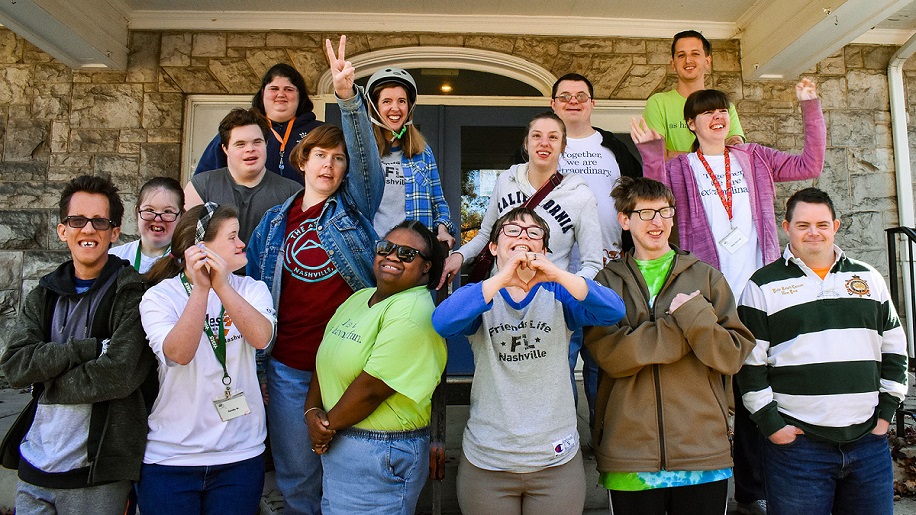 The nonprofit that believes everyone — no matter what their perceived barriers — deserves to be on stage.

Emma created the costume, choreography and performed to the song “You Are My Sunshine.”

Emma was always trying to blend in.

“She was so quiet, never wanting the spotlight,” says Waverly Ann Harris, executive director at Friends Life Community — a nonprofit organization providing personal and social growth opportunities to adults with intellectual and developmental disabilities. “She would literally walk behind people and follow in their footsteps to blend in.”

But surprisingly, Emma showed her willingness to step out of the shadows when she was asked one simple question: “how do you want the world to see you?”

“She wanted to be a sunflower,” says FLC performing arts specialist Sarah Edwards. “She knew she wanted to dance, she knew all the colors she wanted, she knew exactly how she wanted the world to see her — it’s just nobody had ever taken the time to ask her.”

The question was the starting point for Emma’s self-written piece she’d be performing for the program’s Advocacy Through the Arts showcase — where each participant is given the chance to write and perform their own personal works of art live on-stage in front of a public audience.

FLC helps program participants develop their own pieces and perform them live on stage for a public audience.

Since her breakout performance, Emma now self-advocates for herself in other FLC classes — interacting with others, reporting on the things she’s done and requesting additional work.

“She doesn’t shy away anymore,” Edwards adds. “You hear her and see her now because she wants to be seen and heard.”

Friends Life Community began in 2008 as an afternoon program in the basement of Hillsboro Presbyterian Church and, as the need for its services grew, so did the program.

“Since the time of their child’s diagnosis, parents are told by experts that their child will never be able to achieve milestones, life events and success,” Harris explains. “Our program helps families experience their children exceeding expectations that continue into adulthood.”

In its first three years, it expanded from the four founding members to 40 participants. In 2011, FLC was licensed as a day habilitation program and moved into its current home at 4414 Granny White Pike.

Today, FLC’s Advocacy Through the Arts program, led by Edwards and visual arts specialist Heather Dawn, is one of the day programming’s main components — along with life skills, wellness, career coaching and more.

Program participants (appropriately dubbed “the Friends”) aren’t forced to fit any sort of specific artistic mold. Instead, the program offers plenty of options to make sure the Friends get to express themselves in the way they’re most comfortable with.

Alfred — unlike Emma — was always trying to stand out.

Alfred’s character portrait for Tandem Troupe’s second season, ‘The Mystery at the Mansion.’

“He had this bold voice and whimsical energy,” Harris says. “Always positive and joking around.”

When Alfred joined the first season of FLC’s traveling acting ensemble Tandem Troupe three years ago, there were certain social skills he was still building.

“He was sort of all over the place,” Edwards adds. “He had so much in him, but he didn’t know how to use it.”

One of only three registered drama therapists in the state, Edwards says she’s always tried not to get emotional on the job. But with Alfred, that was impossible.

“I remember asking him after rehearsal one day what he was thinking about,” Edwards reminisces. “He looked at me and said, ‘this is the most important thing I’ve ever done’ and I just lost it.”

“He’s more spatially aware and intentional, he stays on cue and listens to those around him now,” Edwards says.

Alfred recently secured a paid job at Edley’s BBQ, a FLC Community Partner, where on his first day he introduced himself proudly to his new co-workers as an “actor” and told them all about his most recent production.

Though the personal challenges Emma and Alfred faced were inherently different, they both overcame those challenges in a similar way — through the power of the arts.

“It’s like a glimpse into their soul,” Edwards says. “Performances provide ownership of something meaningful that is full of integrity, dignity and sophistication.”

Additional performing arts classes within the program include FilmMakers, where the Friends write their own scripts and perform in short films; the advocacy showcase, where 10 Friends spend about a year creating their own individual pieces using different modalities of art; and Tandem Troupe, where the Friends write their own 20-30 minute plays and incorporate local acting professionals to perform that season’s play throughout Nashville.

“When they’re on stage, it’s like they’re able to truly be themselves for the first time,” Harris says. “They don’t have to fit anyone’s box; they get to create their own box and discover more about who they are.”

FLC is now serving over 60 Friends and their families to develop socially, grow personally and break down social barriers both onstage and off.

In the last year, the Friends impacted the local community by serving over 80 volunteer hours per week at local nonprofits such as Christ Presbyterian Church, Project C.U.R.E., Room In the Inn, the Nashville Food Project and Meals On Wheels.

FLC gives this population the avenue to express themselves creatively.

“Everybody wants to be seen,”Edwards adds. “And this population feels less seen because they’re rarely able to fully express themselves.”

Because of the work FLC is doing, people like Emma and Alfred are now getting the chance to be seen for who they are — not how they are diagnosed.

Not only will the Friends’ advocacy art be on exhibit at the Vanderbilt Kennedy Center, but they will also be premiering their film, Everyone Deserves a Place to Belong, featuring former Mayor Briley, Metro Nashville Police, Nashville Predators Captain Roman Josi and the TN Titans.

Tandem Troupe’s third season will perform The Great Vacay Giveaway on May 30 at 3 p.m. and 6 p.m. at Lipscomb University’s Black Box Theatre. Tickets are $10.

FLC second annual Advocacy showcase will be in the fall of 2020.

“The arts serve as a vehicle to build self-confidence, promote self-advocacy and execute self-expression.”