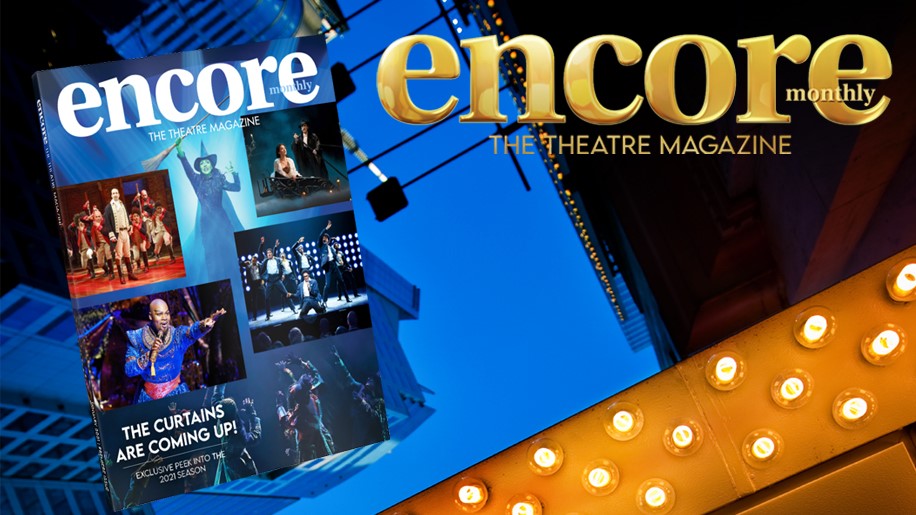 A New Subscription-Only Print Magazine for the 21st Century Theatregoer

Encore Monthly, the new and only national consumer lifestyle magazine focused solely on celebrating the American theatre, will debut its 84-page inaugural issue in January 2021.

Available by subscription only and launching on an initial bimonthly schedule, Encore will move into monthly print releases later in 2021 when Broadway theatres are expected to reopen. The publication is helmed by veteran magazine publishers Louis Doucette and Brantley Manderson, with Editor in Chief Robert Viagas leading an experienced editorial team.

Created specifically as the premiere lifestyle magazine for theatre lovers nationwide, Encore will connect readers to the stage and to each other, with features covering what happens onstage and in the wings as well as all the places theatre fans come together – in the aisles at intermission; in living rooms and dorm rooms; and on laptops and cell phones across the country – and what fans enjoy when not sitting in their theatre seats.

“As major Broadway enthusiasts who’ve dedicated our careers to magazine publishing, we have for some time believed there was an opportunity to create a monthly periodical catering to the many fans like us across the country who are looking for exciting and engaging content about the world of the theatre,” says Doucette and Manderson via press release. “We know Encore Monthly will bring joy and insight to both casual and avid theatregoers, with long-form stories and striking images that capture the excitement of the hush as the curtain rises and the exhilaration of a standing ovation.”

“Never has there been a more apropos time to launch Encore Monthly for theatre lovers who are missing the experience of watching a story unfold before them live on stage. We hope our new magazine delivered to mailboxes each issue is a balm to keep the theatre community – a community we all know is unlike any other – vibrant and alive.”

“Some people in the industry think we’re crazy to launch a new theatre magazine in the middle of a pandemic,” adds Viagas. “But we are crazy—crazy like a fox. Our readers are starving for connection with the theatre, and the pages of Encore Monthly will offer them a feast. Favorite familiar writers are teaming up with exciting and diverse new writers to create a publication that will serve as the voice of American Theatre for the 2020s and beyond.”

The print publication is available exclusively in the United States by mail subscription at the special “intermission” rate of $29.95/year. International readers can purchase an online subscription package. Subscribe now at www.encoremonthly.com.

With its distinctive voice and contributions from both established and emerging writers, Encore Monthly offers a unique and intimate view of the world of the American stage. Its exclusive content takes readers into the wings, behind the scenes and to all the places theatre people come together. It also takes a close look at the lifestyle of theatre lovers, getting inside their living rooms to examine how they spend their time when they’re not sitting in their orchestra seats. It covers everything from food, wine, fashion, travel and much, much more—but all from a theatre lover’s specific point of view. Encore Monthly goes far beyond the experience of seeing a show: it illustrates how that experience can shape our lives forever.

Louis Doucette (Publisher) has been in the publishing business for over 25 years, where he has developed, launched and resurrected magazines in numerous cites including San Antonio, Austin, Denver, Las Vegas, Houston and the Texas Hill Country. During this time he has been involved in all aspects of the publishing industry, and currently owns two companies which publish over a dozen titles in the Central Texas area.

Brantley Manderson (Publisher) is the owner of Encore Atlanta, the performing arts program distributed into all major venues in Atlanta. Manderson has almost 30 years of success in the publishing world, both in New York City and Atlanta, having held management positions at National Geographic Magazine, TIME Magazine and most recently as the Director of Sales at Playbill.

Robert Viagas (Editor in Chief) is an editor, author, journalist, lecturer, podcaster and professor with more than 35 years’ experience, most of it working on Broadway with Playbill Inc., the iconic theatre program company. The founding editor of Playbill.com, Playbill’s theatre news website, Viagas served as editor of the “Playbill Broadway Yearbook” annual for 10 years. Among his 19 books on the performing arts, he was chosen by the original cast of A Chorus Line to tell their story in On the Line: The Creation of A Chorus Line, and by the creators of the original The Fantasticks to tell their story in The Amazing Story of The Fantasticks. Viagas served a term as a nominator for Broadway’s Tony Awards. He frequently appears at libraries and universities performing one of his three lively, entertaining talks, “The Ten Secrets of Broadway,” “The Haunted Theatres of Broadway,” and “Inside the Tony Awards With a Tony Awards Insider.”