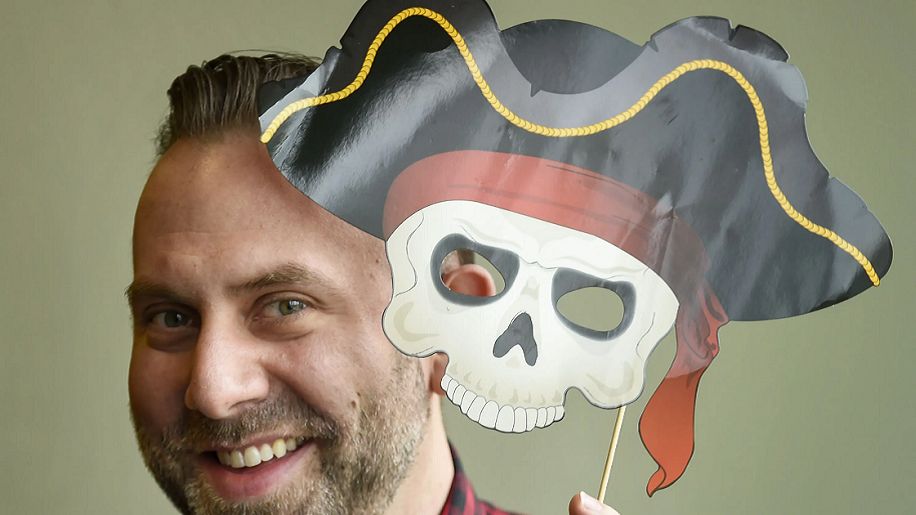 Fact: Every time Ernie Nolan enters a room, that room gets a little brighter.

Why was Ernie Nolan the perfect choice to direct Aladdin and His Winter Wish?

Well, one might say he never really grew up.

Anyone who’s bumped into him during his nearly three-year tenure as Executive Artistic Director of Nashville Children’s Theatre knows his love for theatre radiates with an uplifting and contagious energy.

His folks, who had their own flair for the dramatic arts, may have “played a role” in that.

“My parents actually played opposite each other in high school and college theatre,” Nolan says. “They would act out all my bedtime stories instead of reading them growing up, so I’m really fortunate theatre’s been in my world since the beginning.”

It was a summer vacation to Ontario’s Stratford Shakespeare Festival where Nolan remembers the exact moment he knew what he wanted to do for the rest of his life.

As it turns out, that is his life now.

“A lot of what I do is connected with family and making memories,” Nolan says. “I feel a tremendous pride and responsibility because I know in every performance there might be a young person where it might be the first play they remember.”

You might think children’s theatre directors get to “play” every day, but he’s been quite the busy bee conquering fresh takes on age-old classics as well as more progressive world premieres from a diverse crop of talented playwrights.

As Nolan puts it, he wouldn’t have it any other way.

“This is seriously my dream job,” says Nolan. “It’s truly such a magical gift and wonderful legacy to be a part of.”

From the Windy City to Music City, Nolan’s role at NCT was made official in 2017 after a nationwide search to fill the shoes of Scot Copeland, NCT Producing Artistic Director for 31 years.

“Scot was a big personality and a titan in the field,” Nolan says. “His death was unexpected so, stepping in, I knew there’d be comparisons, and I realized people were still grieving. It was one thing to experience loss and then another to experience chance. Navigating that change has been some of the trickiest but some of the most rewarding parts of my job.”

Born and raised in the Detroit area, Nolan came to Nashville from the Emerald City Theatre in Chicago. There, he helped create The Little Theatre, the nation’s first performance space dedicated exclusively to interactive and immersive theatrical experiences for children ages 5 and under.

Nolan has brought this same concept to NCT with their ever-growing ‘Snuggery Series,’ work that Nolan says has a special place in his heart. These safe, small-audience performances are designed to overcome age, language, and development barriers by focusing on and nurturing creative thinking.

Further building on the company’s 88-year history, Nolan has helped NCT claim a spot as one of the few theatres offering both workshops and full productions of brand-new dramatic work designed for young audiences with the creation of its Hatchery Series.

“We listened carefully to feedback from teachers, parents, students, and other stakeholders like librarians and civic leaders and heard clearly there aren’t enough plays with characters of color telling their own stories” Nolan says. “The NCT Hatchery aims to create new works that serve as mirrors and windows to diverse lives reflected on our stage.”

A graduate of both the University of Michigan Musical Theatre Program (with a BFA in musical theater) and The Theatre School at DePaul University (with an MFA in directing), Nolan is always on the lookout for inspiring new works as the international representative for TYA/USA to the International Association of Theatre for Children and Young People (or ASSITEJ, a global theatre organization serving young audiences).

Shining a light on though-provoking, educational and progressive world premieres is clearly a passion for Nolan.

“Working on a new work is so thrilling because the expectations aren’t there,” he says. “The freedom and joy of creating the characters before your eyes and working with such talent is magical.”

For Nolan, however, it all comes back to family.

“Theatre for me is not only about passion and love, but a common bond I have with my family and then recreating that bond in other families.”

See how Nolan puts his touch on Lythgoe Family Panto’s production of Aladdin and His Winter Wish, coming to TPAC December 12-22.

As the recipient of the Illinois Theatre Association’s Award for Excellence in Theatre for Young Audiences in 2014, Nolan’s work as a playwright has been featured both nationally and internationally. He has adapted and directed such storybook favorites as If You Give a Cat a Cupcake, If You Take a Mouse to School, Mo Willems’ Don’t Let the Pigeon Drive the Bus! and The Adventures of Doctor Dolittle. His work at The Broadway Playhouse includes A Charlie Brown Christmas, Fancy Nancy The Musical, Pinkalicious, The Cat in the Hat, Cinderella, Charlotte’s Web, and the world premiere of Hansel and Gretel: A Wickedly Delicious Musical Treat, written in collaboration with GRAMMY-nominated recording artist Justin Roberts.

As resident artist of The Coterie Theatre in Kansas City, Missouri, Nolan directed and choreographed world premieres by such Tony-nominated artists as Willy and Rob Reale, Stephen Schwartz, Stephen Flaherty and Lynn Ahrens, and Bill Russell and Henry Krieger. For Chicago Playworks he has directed The BFG, The Giver, The Witches, A Wrinkle in Time, Number the Stars, The Day John Henry Came to School, Peter Pan and Wendy and The Kid Who Ran for President. In March 2012, Ernie made his Off-Broadway debut as a choreographer with Lucky Duck at the New Victory Theatre.