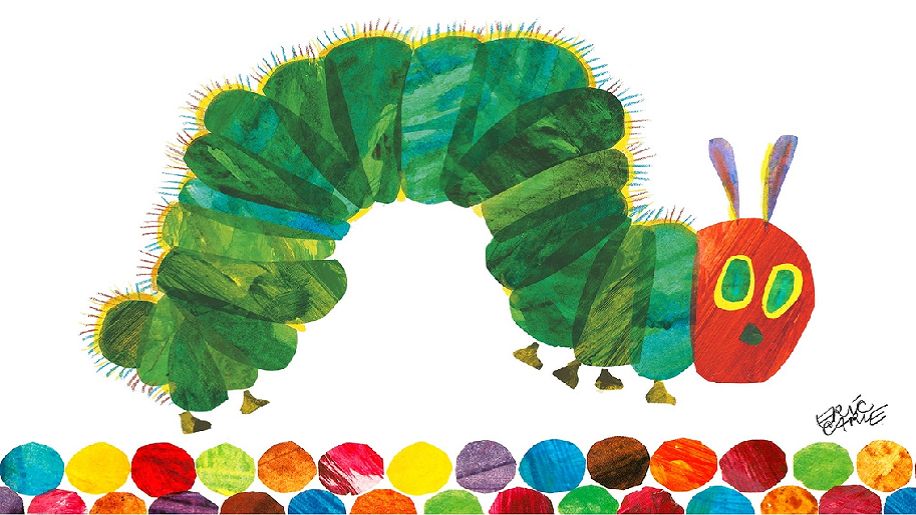 That colorful critter that could never get enough to eat has wiggled its way off the pages of your childhood and onto the walls of the Frist Art Museum for its presentation of Eric Carle’s Picture Books: Celebrating 50 Years of “The Very Hungry Caterpillar,” which will be on display Oct. 18, 2019, through Feb. 23, 2020.

Over the course of 50 years and over 70 books, Eric Carle’s work has captivated readers young and old with his hand-painted illustrations and distinctively simple stories. His signature artistic technique is collage, made by hand-painting sheets of tissue paper and then cutting, assembling, and gluing pieces onto illustration board. For many children, his books were their first introduction to reading.

Now, Carle’s books are the inspiration behind the exhibit featuring more than one hundred original artworks by one of the most acclaimed and beloved illustrators of our time. Drawn from the Collection of Eric and Barbara Carle and organized by The Eric Carle Museum of Picture Book Art in Amherst, Massachusetts, the exhibition will be on display in the Frist’s Upper-Level Galleries from October 18, 2019, through February 23, 2020.

The exhibition spans five decades of Carle’s picture-book career—from Brown Bear, Brown Bear, What Do You See?, his 1967 collaboration with author Bill Martin Jr., to The Nonsense Show, Carle’s playful ode to Surrealism, published in 2015. It pays special tribute to the 50th anniversary of Carle’s most popular book, The Very Hungry Caterpillar, and offers an in-depth look at his artistic process and the personal significance of many of his stories.

For half a century, Carle has inspired children to fall in love with books. While his stories are often lighthearted, they teach essential lessons, too. As children read about animals, families, and fables, they also learn their colors, letters, and numbers. Additional design elements—such as holes, flaps, and sounds—make reading accessible, multisensory, and fun.

Twenty-three of Carle’s books are represented in the exhibition. Published in 1969, The Very Hungry Caterpillar was just the second book that Carle both wrote and illustrated himself. Fifty million copies have sold, with the book being translated into over sixty languages. Like many of his other titles, The Very Hungry Caterpillar reflects Carle’s lifelong interest in the natural world, an appreciation he learned from his father. The caterpillar’s story is also a metaphor for childhood and growing up.

“Many of Carle’s stories are rooted in his own life and are inspired by family members and friends, including Papa, Please Get the Moon for Me and Friends,” said Frist Art Museum Curator Trinita Kennedy.

Carle did not plan on a career in children’s books. He was born in Syracuse, New York, in 1929 and moved to Stuttgart, Germany when he was six. He graduated from art school in Stuttgart and, for over a decade, worked in New York City as an art director and graphic designer.

“Everything changed in the late 1960s when Bill Martin Jr., a respected educator and author, noticed one of Carle’s magazine advertisements featuring a red lobster,” Kennedy said.

Martin had found the artist for his next book Brown Bear, Brown Bear, What Do You See?, propelling Carle from working as an advertising executive to becoming a world-famous author and illustrator.

The Frist Art Museum opened in April 2001, and since that time has hosted a spectacular array of art from the region and from around the world. The mission of the Frist Art Museum is to present and originate high-quality exhibitions with related educational programs and community outreach activities.

This exhibition is the Frist’s first-ever celebrating a children’s book illustrator and, like Carle’s books, it is designed with kids in mind.

“Artwork will be hung lower than our norm to engage small visitors,” Kennedy said. “Copies of Carle’s books will be shelved in cozy nooks where families can read his stories together while surrounded by original artwork.”

In addition to English copies of the books, there will be Braille and foreign-language editions, with an emphasis on the most common languages spoken and studied in Nashville, such as French, Kurdish, Somali, and Spanish. An interactive family guide in English and Spanish offers both in-gallery and at-home learning activities as well as biographical information about Carle. A short film showing Carle working in his studio provides insight into his innovative process, and a video of Carle reading The Very Hungry Caterpillar creates a virtual “storytime” with the author.

“All good children’s books also appeal to adults,” Kennedy said. “Visitors to this exhibition who are fine arts enthusiasts will recognize in Carle’s work affinities with European modernism, from Henri Matisse’s collages to the German Expressionist’s emotional use of color. Carle revels in the wordplay, visual puzzles, and nonsense of Surrealism as well.”

Join Ellen Keiter for this lecture on the renowned author and illustrator Eric Carle. The first part of this program will explore Carle’s training as a graphic designer, his early career in advertising, and his artistic influences. Then, Keiter will discuss Carle’s seminal children’s books and artistic techniques, highlighting his lasting contributions to children’s literature.

Ellen Keiter is chief curator at The Eric Carle Museum of Picture Book Art, where she oversees all aspects of The Carle’s curatorial department, including the acquisition, care, research, and interpretation of the museum’s collection and its robust exhibition program. Since joining The Carle four years ago, Keiter has significantly expanded the museum’s national and international outreach through traveling exhibitions, and she has been awarded prestigious state and federal grants for improved collections care and visitor engagement. Keiter previously served as director of exhibitions at the Katonah Museum of Art in New York, and as curator of exhibitions at the Hudson River Museum in Yonkers.

Join Turnip Green Creative Reuse for a collage workshop inspired by Eric Carle’s illustrations. Learn about Carle’s process on a tour of the exhibition Eric Carle’s Picture Books: Celebrating 50 Years of “The Very Hungry Caterpillar.” Then join TGCR teaching artists to make your own nature-inspired collage. Practice some of Carle’s painting and collaging techniques by reusing tissue paper and other found objects to depict your own land-, sea-, and skyscapes.

Turnip Green Creative Reuse is a pay-what-you-wish retail store and green gallery that offers educational resources and artist support. Its mission is to foster creativity and sustainability through reuse, keeping valuable materials out of our landfill and getting them back to artists, teachers, students, and anyone else interested in minimizing waste and maximizing inspiration.