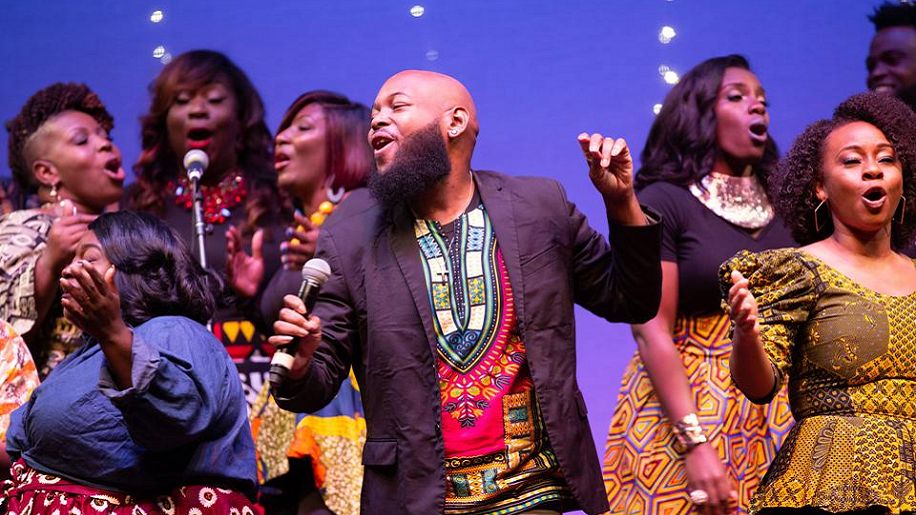 “A workout for the soul — music to build up all in attendance.”

Trey McLaughlin knew he wanted to be a singer since he was four-years-old.

“I sang my first solo in preschool when I was four,” McLaughlin says. “Then I taught a song to a group of kids in my class a song and led them in it — harmony and all.”

The vocalist, composer and educator — who’s servin’ up some spiritual sustenance Feb. 18 with his Sounds of Zamar choir at the historic War Memorial Auditorium — thought if you go to school, you have to do school stuff.

Fortunately, his mother straightened him out.

“My mom told me one day I could go to college specifically for music to develop my vocal skills,” McLaughlin explains. “As soon as I knew that that was what I could do, I didn’t want to do anything else for the rest of my life.”

The maestro continued on his musical mission, starting vocal groups at every school he ever went to through elementary, middle school, high school and eventually college.

“I ended up taking over the gospel choir at my college,” says McLaughlin. “My passion for teaching really solidified coming back during college to work with a teen organization I was actually in in high school.”

Zamar is from the Hebrew and means sing or praise. You will hear songs of praise that will inspire and bring joy to the heart.

For McLaughlin, singing and instructing have always gone hand in hand.

“Your voice is really personal. It’s an extension of yourself,” McLaughlin says. “The biggest reward to teaching is seeing that light come on in people’s eyes when they discover something new about themselves as artists, seeing them achieve.”

McLaughlin continues to sing, teach and uplift audiences today through his Grammy-nominated Sounds of Zamar, who embarked on their first national tour in fall 2018. Formed in 2009 and now boasting millions of YouTube views, they have performed everywhere from church basements to international stages and alongside gospel greats like William McDowell, Kierra “Kiki” Sheard and James Fortune.

Possessing a powerful, cutting tenor, McLaughlin composes and arranges the sumptuous harmonies showcased throughout the performance. In addition to their distinct gospel style, the group inspires audiences with clever, soulful arrangements of musical theater covers.

The group’s opulent harmonies are showcased throughout their 2012 debut album ‘Limitless.’

Hailing from Augusta, Georgia, the group’s concerts aim to be a workout for the soul, stressing “community” and an “uplifting experience.”

“My musical mission has always been to bring people together through song,” McLaughlin says, “and simply create an atmosphere filled with joy and positivity.”

McLaughlin certainly knows how to stay busy. When he isn’t leading the sumptuous harmonies of his Sounds of Zamar choir, he can be found in Augusta.

There, he serves as director of worship and arts at Tabernacle Baptist Church, artistic director of the non-profit performing arts youth group “Creative Impressions” and even an adjunct faculty member at the University of St. Thomas in St. Paul, Minnesota.

Whatever the setting, McLaughlin delivers spiritual sustenance with an unadulterated gospel fervor.

In addition to being the Founder and Director of The Sounds of Zamar, a musician, and an accomplished composer, Mr. McLaughlin is a much sought after clinician. In 2014, Mr. McLaughlin had the honor of conducting a Master Class and performing at the L’Opéra de Massy in Massy, France.

Trey McLaughlin and The Sounds of Zamar

In October of 2015, Trey conducted a 300-voice choir in Krakow, Poland as the guest clinician of the annual 7x Festival. Trey was also afforded the opportunity to conduct a workshop and perform in Menorca, Spain and Rajadell, Spain. Most recently, Mr. McLaughlin served as the principal clinician and Adjunct Faculty at the University of St. Thomas in St. Paul, Minnesota, as well as a guest clinician for several Honor Choruses throughout the state of Georgia.

After being featured on the song Chasing After You from Vashawn Mitchell’s Grammy-nominated album Triumphant, Trey McLaughlin and The Sounds of Zamar have become sought after for their expressive vocals and intricate arrangements of classic gospel hymns.

A performance by Trey McLaughlin and the Sounds of Zamar may pleasantly surprise music fans who might consider worship music to be bound to traditional sounds. The celebrations of this 26-piece choir and its director will touch upon an array of familiar musical forms.

“One thing we’re not is traditional,” McLaughlin says. “I mean, I think we do a good job of paying homage to the genre, but we definitely give everything our own distinct flair and style.”

With viral videos and millions of YouTube followers, this group has toured abroad extensively and is positioned to be one of the brightest new groups on the gospel scene.

Tickets for Trey McLaughlin and The Sounds of Zamar start at $25. For more information, call TPAC box Office at 615-782-4040 or visit TPAC.org.

About McLaughlin: Trey M. McLaughlin is a passionate vocalist, educator, composer, arranger, and clinician. Known for fusing together an eclectic mix of musical genres, he arranges and performs original works with his own touring and recording ensemble, The Sounds of Zamar, who embarked upon their first National Tour in Fall 2018. Trey currently serves as Director of Worship and Arts at Tabernacle Baptist Church of Augusta, Georgia, and is the Artistic Director of the non-profit performing arts youth group, Creative Impressions, of which he was once a member and Student Director. Trey serves as adjunct faculty at the University of St. Thomas in St. Paul, Minnesota, teaching graduate level courses in conducting, vocal technique, composition, arranging, and piano.