Home > News Center Stories > How a trip to Haiti inspired the ‘Once on This Island’ revival coming to TPAC Oct. 15-20

How a trip to Haiti inspired the ‘Once on This Island’ revival coming to TPAC Oct. 15-20 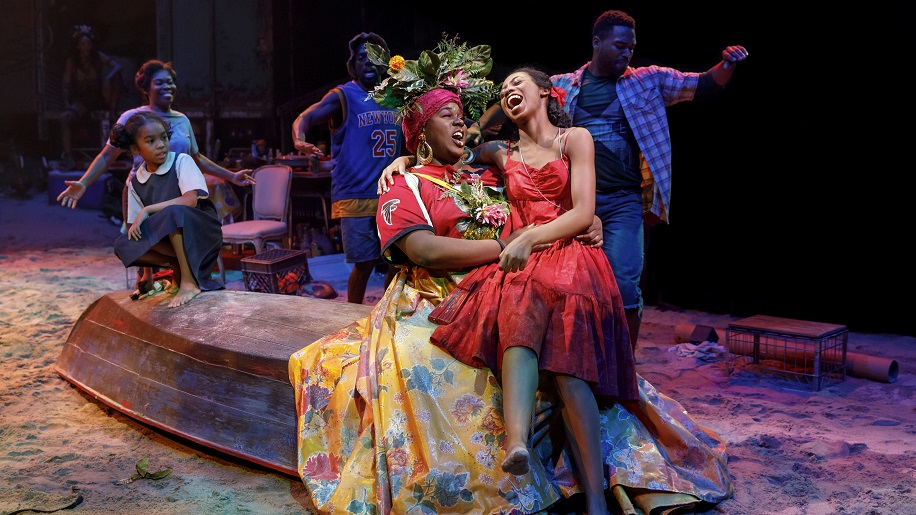 Mia Williamson as 'Little Girl,' Alex Newell as 'Asaka,' and Hailey Kilgore as 'Ti Moune' in 'Once on This Island.' Photo by Joan Marcus.

When you walk into TPAC’s Jackson Hall Oct. 15-20 for the Tony Award-winning revival of Once on This Island, you may wonder why you feel transported to a faraway land just ravaged by a storm.

There is water, garbage, a huge tractor trailer, and sand that blankets the stage.

What was the inspiration behind this realistic and immersive set design?

It all started with a three-day trip to Haiti, where the show’s scenic designer, Dane Laffrey, and the show’s director, Michael Arden, captured every unique inch of the Caribbean country that was upended by Hurricane Matthew in 2016 and was still recovering from a massive earthquake in 2010.

“It’s hard to put the trip into words,” says Laffrey. “It was incredible to experience the place Once on This Island is actually set because we wanted our version to feel as real, visceral, and authentic as possible.”

The producing team of ‘Once on This Island’ during their three-day research trip to Haiti.

Haiti, or as it written there, Ayiti, is a vibrant, resilient, and mountainous place filled with people as proud and wondrous as the island’s long legacy of triumph and struggle.

According to Laffrey, “the trip informed both the look of the show and the character of the piece of theatre we wanted to make — which was certainly immersive, environmental, and optimistic.”

Once on This Island’s creative team were given valuable opportunities in what they were able to see and experience — including a voodoo church service, which Laffrey says was “indescribable.”

But the biggest takeaway of their trip may surprise you.

“We started thinking about the trip in the context of the massive earthquake that flattened the island in 2010 — and then several years later when Hurricane Matthew came through and blew it apart again,” Laffrey says.

“We had been dwelling on the very compelling visuals that came out of those disasters instead of focusing on the better story that this place is constantly rebuilding itself. One day, it’s completely wrecked and the next day, the community pulls together to fix it. That was the big takeaway for us.”

Further highlighting the vibrant culture of the Caribbean, the revival’s authentic set design features many natural and immersive elements rarely seen on the Broadway stage.

“All the elements that were the talking points of the Broadway design have been maintained for the tour: the sand, the rain, the fire, the wind, and — in some cases — the animals,” Laffrey says. “From the moment the audience walks into the theater, they get that communal feel of the Caribbean.”

But that’s not the only thing unconventional about this set. The revival opened in December 2017 with the unique vision of making the audience part of the staging.

“Audiences will be invited to put their feet in the sand and surround our company, becoming part of the show,” says Arden. “It’s our goal to give all audiences a unique perspective of the communal nature of what theatre can be.”

Taking the island on the road

Dane Laffrey’s Tony-nominated set for ‘Once on This Island’ as it was seen at The Circle in the Square Theatre
.

The revival of Once on This Island opened at The Circle in the Square Theatre — founded in 1951 and the only Broadway house built “in the round.” That means the playing space is circular or oblong in shape and the audience sits around the stage.

“Circle in the Square was inescapably interactive; and we’re now realizing just how installed the set was there. It really felt like a living, breathing thing,” Laffrey says. “Now, we’re figuring out how to make something feel as open and welcoming to an audience when they’re sitting much further from it.”

Once on This Island is a culturally rich show that literally makes its footprint in every theater it plays. This show has been performed regionally and in high schools around North America since its original Broadway debut in 1990, but this may be the first time communities see the iconic musical performed by a Broadway company.

The musical is based on the 1985 book My Love, My Love by Rosa Guy, which is a retelling of Hans Christian Andersen’s The Little Mermaid set in the Caribbean.

Both are stories of a young girl who falls in love with a boy outside of her station in life – except in My Love, My Love, the boundary is socio-economical whereas in The Little Mermaid, the boundary is land and sea.

The show tells the tale of Ti Moune, a fearless peasant girl in search of her place in the world and ready to risk it all for love. Guided by the mighty island gods, Ti Moune sets out on a remarkable journey to reunite with the man who has captured her heart.

Nominated for eight Tony Awards and winning for Best Revival of a Musical, the revival was all about preservation, Laffrey says.

“It’s one thing when you’re making something new, but it’s completely different when you’re responsible for preserving the spirit of something that was very good — and very loved,” he adds.

The tour will test launch at The Carson Center for Performing Arts in Paducah, KY on October 12, followed by its official opening at TPAC.

This iteration of Once on This Island explores societal separations and tensions. In the show, Ti Moune and her family live in a smaller ‘English Caribbean’ village seen as lower class, and the boy she falls in love with, Daniel, comes from the French-influenced village seen as the higher class. In the world of the play these two societies do not mix or interact.

“The message is universally important,” Laffrey says. “We desperately need the theme right now of two sides coming together to find common ground, being united by their intertwined stories.”

Written by the Tony Award-winning team Lynn Ahrens and Stephen Flaherty, Once on This Island features new orchestrations by original orchestrator Michael Starobin.

Keeping in the spirit of community and conservation, the show’s costume designer Clint Ramos uses recycled goods, as well as every-day household items to create the show’s Caribbean-inspired costumes. They aren’t what you typically see in a musical. The gods construct their costumes out of what’s surrounding them. The garbage scattered on stage during the preshow turns into the actors’ uniforms for the rest of the performance.

The tour test launches at The Carson Center for Performing Arts in Paducah, Kentucky, on October 12, followed by its official opening at TPAC.