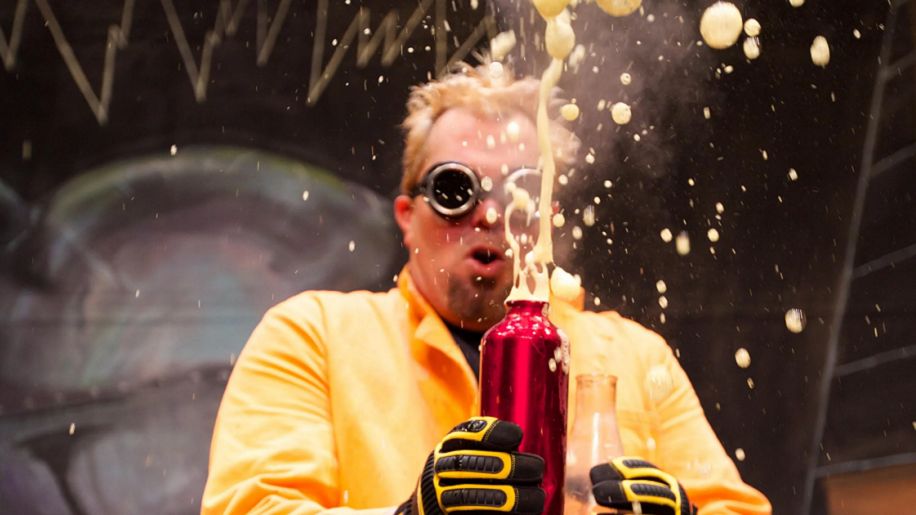 If you combined Bill Nye and Guy Fieri in a lab, then sent him to acting school, you’d get Doktor Kaboom.

Chrome goggles, an orange lab coat, motorcycle boots and spiked hair, the mad scientist not only embraces the ridiculous, he celebrates it.

Doktor Kaboom has been dazzling young minds with interactive, educational and comical performances for over a decade — performing for TPAC’s HOT Season for Young People for the fifth time this past December.

But the man behind the madness didn’t always know he wanted to entertain young audiences by making water bottles into rockets and catapulting bananas across the stage.

“It took me 40 years to figure out what I wanted to do for the rest of my life,” says actor, comedian and Doktor Kaboom creator David Epley. “But when I found it, I never looked back.”

Epley grew up expecting to be a research physicist, then a biomedical engineer, then a mathematician, an astrophysicist, a chemical engineer and a marine biologist. So, naturally, he became an actor.

“The stage’s calling eventually became too loud to ignore,” he says.

After having studied to become a chemical engineer at the North Carolina School of Science and Mathematics, Epley spent the next two decades performing and directing original comedy, with outdoor festivals and street performance being his venues of choice.

Doktor Kaboom is a German physicist who teaches science is for everyone.

It was during his 20-year tenure performing on the Renaissance Festival circuit where he learned how to interact with an audience.

“During those shows, I worked with some brilliant minds that taught me how to deal with any type of situation you can encounter,” Epley says.

The idea to mix his two passions of science and performing together hit him like a bus one day while working at a Renaissance Festival in Texas, wondering what he was about to do for the upcoming off-season.

“It was about 12 years ago. I had turned 40 and decided ‘I’m going to have a good idea this year,’” says Epley. “And when I did, instead of talking about it for a few weeks until I got bored talking about it, I followed through.”

That’s when the character Doktor Kaboom was born, a German physicist who teaches science is for everyone (adults included) through a variety of interactive experiments ranging from optical illusions, to chemical reactions, to a homemade hovercraft.

During some shows, Epley creates artificial gravity. During others, he electrocutes a pickle. The point is, no two shows are the same.

“Since I’m an actor, I didn’t want to just be me on stage,” Epley explains. “I wanted the character to be larger than life and over the top — so I made him German.”

The German accent may be fake, but the science is real.

Epley also reminds students that science is a part of everyday life by using every day, household items — such as dish soap, balloons and trash barrels — in his experiments to prove that science is accessible to everyone.

“My mission is to remind the world that science is all around us,” he says. “It’s all around us and it’s not difficult. It just takes effort; and that’s not the same thing as hard.”

But perhaps the most striking moment of his performances is how he empowers children to think well of themselves. He remembers a time when he asked a student volunteer, “you’re smart young man, yah?” and the student answered him, “no.” Ever since then, he’s made a point of that lesson in his shows.

“That moment floored me,” Epley explains. “That experience showed me that I had an opportunity to not just teach science, but to empower these kids and show them they are capable.”

During the last TPAC show, Epley’s voice commanded the attention of nearly 1,000 students staring at him unblinkingly in TPAC’s Polk Theater.

“Learn this and never forget it,” he told them. “You are smart. Believe it.”