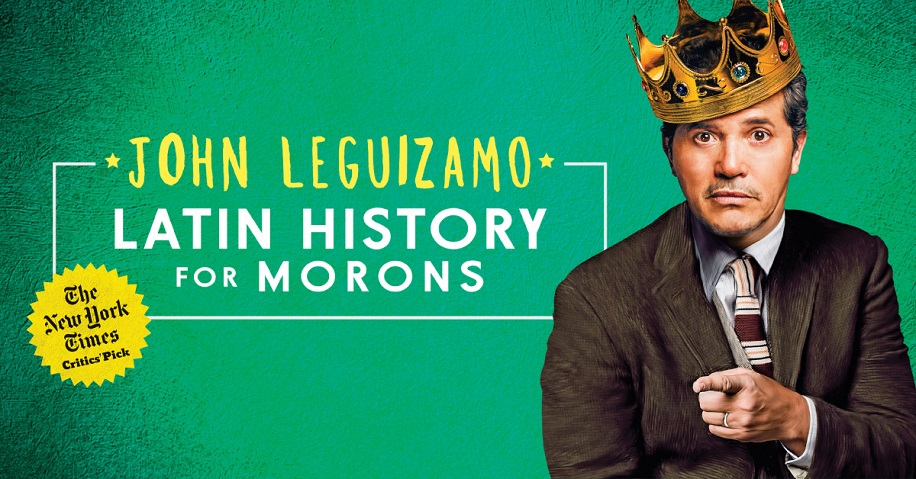 Latin History for Morons is inspired by the near total absence of Latinos from his son’s American History books. Leguizamo embarks on an outrageously funny, frenzied search to find a Latin hero for his son’s school history project. From a mad recap of the Aztec empire to stories of unknown Latin patriots of the Revolutionary War and beyond, Leguizamo breaks down the 3,000 years between the Mayans and Pitbull into 110 irreverent and uncensored minutes above and beyond his unique style.

Ben Brantley of The New York Times called Latin History for Morons a “surprisingly poignant one-man play that slyly poses sharp and timely questions of what culturally defines American identity and who, in the nationalistic age of Trump, has ‘the right’ to be here.”

Steven Suskin of The Huffington Post concluded, “John Leguizamo is back, as smart, provocative, bracing – and wise – as ever. In this dazzling comedic-philosophic evening of laughter, his Latin is lesson is a treat.”

Latin History for Morons concluded its successful run on Broadway on February 25, 2018. The original 16-week engagement was extended an additional three weeks on opening night, November 15, 2017. The production was the first play of the 2017-2018 season to recoup its entire capitalization.

Fresh off the celebrated and financially successful Broadway run of “Ghetto Klown,” Leguizamo began his acclaimed work on Latin History for Morons. The play had its world premiere at Berkeley Repertory Theatre followed by its New York premiere at The Public Theater. Directed by Tony Taccone (“Wishful Drinking,” “Bridge & Tunnel”), the Tony-nominated production of Latin History for Morons is written and performed by Leguizamo, featuring scenic design by Rachel Hauck, lighting design by Alexander V. Nichols, and original music and sound design by Bray Poor.