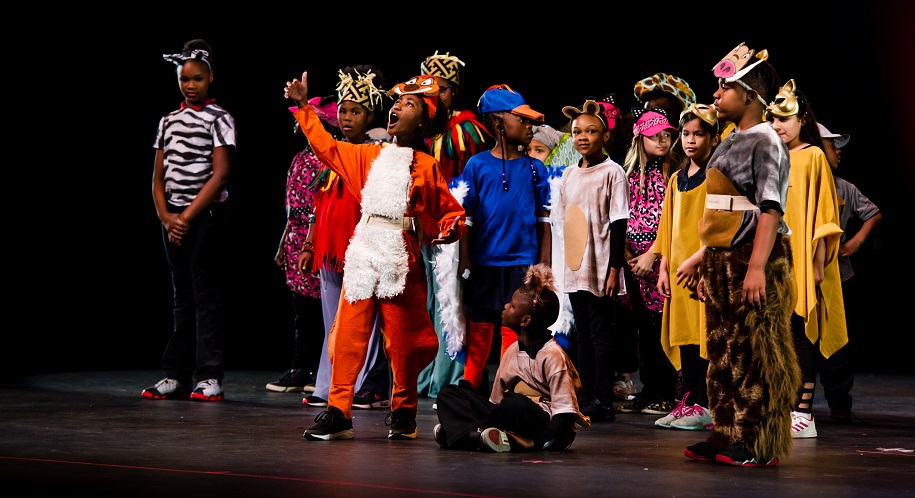 If you were at TPAC on May 9, you probably thought you made a wrong turn and ended up at the zoo. But, surprisingly enough, those weren’t real animals in TPAC’s Jackson Hall. They were students dressed in costume ready to perform for the Disney Musicals in Schools “Student Share” celebration.

In 2011, Disney Theatrical Group selected TPAC and Metro Nashville Public Schools for the first pilot of Disney Musicals in Schools (DMIS) outside New York City. At no cost to them, participating elementary and middle schools receive a performance license for the Disney KIDS musical of their choice, a comprehensive ShowKit, and in-school support from TPAC’s education staff and teaching artists. Twenty-seven Metro Schools participated this year, with more than 1,200 students performing in musicals at their schools.

The morning started off with a welcome from Kristin Horsley, TPAC’s senior director for education and outreach, and was followed by a performance of Alan Menken’s “It Starts with a Dream” by all the students. Sarah Trahern, CEO of the Country Music Association, helped to launch the event.

“Disney Musicals in Schools at TPAC is one of the most comprehensive arts-in-education programs in the country, one the CMA Foundation is incredibly proud to support,” Trahern said. “Participating in DMIS not only teaches students to work together, problem solve, and be creative, but inspires them to dream, and know what it feels like to be a part of something truly magical.”

Eddie George, NFL legend, actor, TPAC Board Member, served as the Master of Ceremonies and did a wonderful job of motivating the students to always believe in themselves and have the courage to pursue their dreams.

“Producing a work of theatre takes strength, perseverance, teamwork, discipline, and other things you need to achieve your dreams, whatever you want to do in life,” said George, who made his Broadway in debut playing the role of “Billy Flynn” in Chicago the Musical.

George invited the first school, Tusculum Elementary, out to the stage to perform “The Bare Necessities” from The Jungle Book KIDS, and the whole cast rolled through the performance with ease as Baloo taught Mowgli to “forget about your worries and your strife.”

Next up, Alex Green Elementary performed “Hakuna Matata” from The Lion King KIDS. Everyone had extravagant costumes as they sang Simba from childhood into adulthood, nailing their lines making the audience laugh along the way.

Eddie George speaking with students from Shane Elementary after their performance of “Circle of Life”.

Thomas A. Edison Elementary kept us on the African savanna for their magical performance of “He Lives in You” from The Lion King KIDS. The stage was dark, and all the students had lights in their hands as they helped Simba realize that Mufasa lives on within him.

Glencliff Elementary brought us back to The Jungle Book KIDS as they sang and danced their way through both parts of “That’s What Friends Are For.” They even had a giant snake on stage. The audience was dancing in their seats as all the jungle animals had to hide Mowgli from Shere Khan, and they learned the importance of working together. It was a job well done!

The final performance was from Shayne Elementary who sang the crowd-pleasing “Circle of Life” from The Lion King KIDS. They had all the animals represented onstage – from elephants to giraffes to hyenas to antelope! The five Rafikis did a great job of leading the group in one of the most iconic Disney songs.

But the magic didn’t stop with the student share celebration. Each of the participating schools will receive a free license to perform another Disney KIDS musical of their choice next year as well.

Learn more about how TPAC’s Disney Musicals in Schools makes a difference in Metro Schools and how your school can apply for the program.