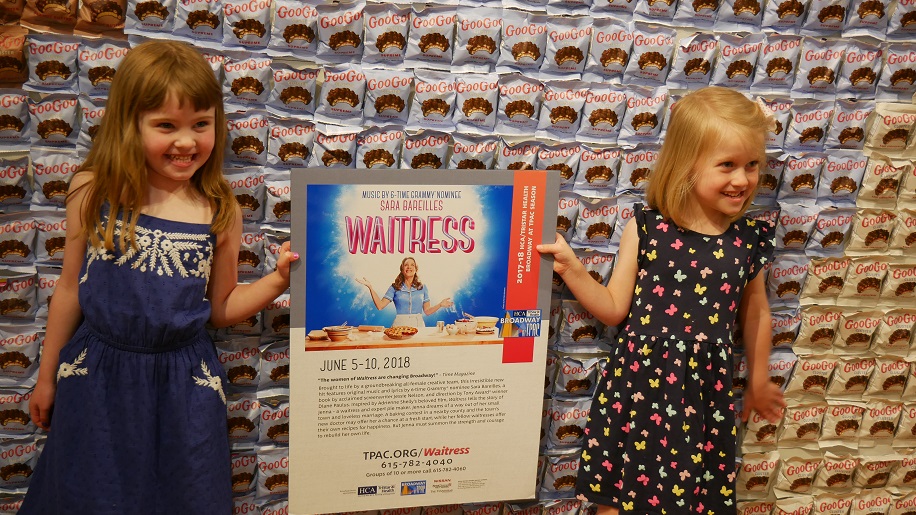 Olivia James Graves and Ellie James will perform the role of "Lulu" in Waitress at TPAC June 5-10.

The Tony Award nominated musical Waitress presented by Nashville Originals will feature the talents of two local young actresses sharing the role of “Lulu” during the Nashville engagement on June 5-10 in TPAC’s Jackson Hall.

Both girls were chosen via an audition process held at TPAC in March. Over 40 girls participated in the auditions, which were presided over by members of the Waitress company. The character of “Lulu” is cast locally in each tour market, and two girls are chosen to share the role. Graves and James will perform in four performances each during the engagement.

Graves is a Nashville native who will start at Harpeth Valley Elementary school this fall. She has performed as a pianist and recently started violin lessons, but this will be her acting debut. Originally from Louisville, Kentucky, but part of a large Nashville family, James enjoys tumbling and soccer, and she currently attends St. Edward School. This is also her acting debut.

Goo Goo Cluster’s “Lulu Loves Goo Goo” pie will be available at the shop through mid-June.

The casting announcement of the Nashville Lulu’s took place at the Goo Goo Cluster shop downtown, where Goo Goo Cluster also revealed a new pie inspired by the show. The “Lulu Loves Goo Goo” pie is a layered chocolate and caramel cream pie with a marshmallow meringue, topped with roasted peanuts and a dark chocolate ganache that will be available at the shop from May 4 through mid-June.

Inspired by Adrienne Shelley’s beloved film, Waitress tells the story of Jenna – a waitress and expert pie maker who dreams of a way out of her small town and loveless marriage. A baking contest in a nearby county and the town’s new doctor may offer her a chance at a fresh start, while her fellow waitresses offer their own recipes for happiness. But Jenna must summon the strength and courage to rebuild her own life.

“It’s an empowering musical of the highest order!” raves the Chicago Tribune. “Waitress is a little slice of heaven!” says Entertainment Weekly and “a monumental contribution to Broadway!” according to Marie Claire. Don’t miss this uplifting musical celebrating friendship, motherhood and the magic of a well-made pie.

Waitress is the seventh production featured in the 2017-18 HCA/TriStar Health Broadway at TPAC season and presented locally by Nashville Originals. Performance schedule, prices, and cast are subject to change without notice. The Broadway season is supported by the HCA Foundation on behalf of HCA and the TriStar Family of Hospitals, and NewsChannel 5 is the media sponsor for the season. Institutional sponsors for TPAC include Nissan North America and Coca-Cola. TPAC is funded in part by support from the Tennessee Arts Commission and the Metropolitan Nashville Arts Commission.