Mark the winter solstice with OZ Arts’ ‘The Longest Night,’ featuring the Portara Ensemble and over 40 Nashville performers 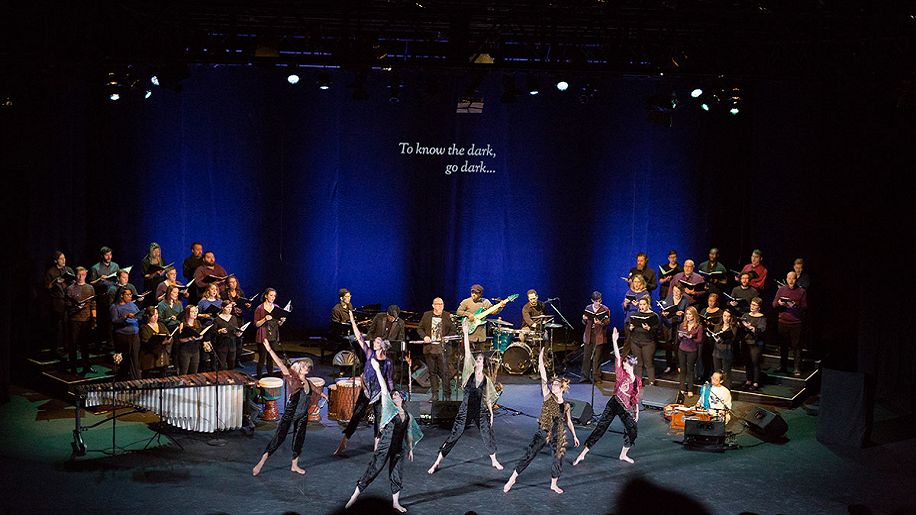 Because so many were turned away from last year’s sold-out premiere of The Longest Night, OZ Arts Nashville is bringing back this unique, multidisciplinary celebration of the winter solstice for three performances this year.

The Longest Night will take place on the actual longest nights of the year — Dec. 20 and 21 — bringing together over 40 Nashville-based artists for this celebration.

Jason Shelton, who has helped guide Portara Ensemble since its birth in 2010 — first as assistant director and then artistic director — has long been recognized for his unique collaborative endeavors. The Longest Night is the latest in an evolving journey.

“It has been a long-time dream of mine to create an artistic experience that showcases the incredibly diverse talents of this city — not just music, but poetry and dance and so much more,” says Shelton. “Working with this team of collaborators has been a dream come true and having so many incredible guests lined up to celebrate with us just makes it all the richer.”

The voices of Portara Ensemble weave throughout the show, which includes a mix of original music written for The Longest Night by Shelton and Coffin alongside seasonal favorites. Rouse serves as narrative guide while Epiphany’s dancers grace an enchanting tale that introduces us to a host of local artists who explore the wisdom of the darkness and celebrate the return of the light.

This multi-community holiday celebration is appropriate for all ages. Tickets are $25 at ozartsnashville.org.

Jason Shelton, formerly a Franciscan brother, received a Master of Divinity from Vanderbilt Divinity School in 2003, where he focused on music as a resource for building community across differences. In addition to his work with Portara, he served as Associate Minister for Music at the First Unitarian Universalist Church of Nashville from 1998-2017. Jason is an award-winning composer and arranger, and he recently conducted Step By Step: the Ruby Bridges Suite at the Smithsonian National Museum of African American History and Culture. Weekdays you’ll find him working with local non-profit Hands On Nashville to meet community needs through volunteerism.

Saxophonist/composer/educator/author Jeff Coffin is a 3x Grammy award-winning artist and toured as a member of Bela Fleck & the Flecktones from 1997–2010. In 2008 he joined forces with the Rock & Roll Hall of Fame-nominated Dave Matthews Band after the injury, and eventual passing, of founding member LeRoi Moore. He officially joined DMB in 2009. Jeff currently teaches at Vanderbilt University when not on tour, presents music clinics around the country to all ages of students, has written 3 books, leads his own groups, engineers and produces, and is the founder of the record label Ear Up Records.

Ciona Rouse, who took part in the 2017 Nashville International Women’s Day event at OZ Arts, released Vantablack, a collection of poems, with Third Man Books and was a featured poet in the Frist presentation of Nick Cave: FEAT. Nashville presented at Schermerhorn Symphony Center in 2018.

Portara Ensemble has quickly become a creative force in the music scene of Middle Tennessee.  Their innovative programming and artist collaborations have crossed the boundaries of visual and performing arts, and brought exciting new music to their audiences.  Led by Artistic Director Jason Shelton, Portara Ensemble’s thought-provoking thematic choral programs explore a wide variety of music from around the globe sung by professional, semi-professional, and amateur volunteer singers.

Epiphany Dance Partners has been creating and performing dance in Nashville since 1994. After years of experience as a dancer and emerging choreographer with the company, Lisa Spradley took over as Artistic Director in 2014. She won the Periscope People’s Choice Award for her vision as a dance artist and her mission for the company. Epiphany searches for opportunities to partner with other creative minds to increase the appreciation for dance as artistic expression, a unique form of communication, and a way to strengthen community. By seeking the extraordinary in expressive movement, they hope to inspire and educate performers and audiences alike.