‘May We All’ sets Nashville residency at TPAC for Summer 2022 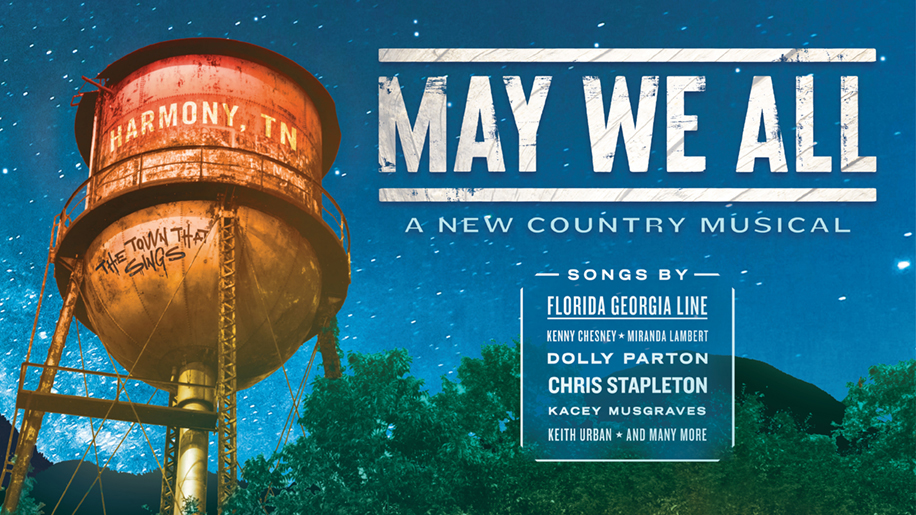 Lively McCabe Entertainment and CuzBro Productions – the production company founded by Brian Kelley of the multi-platinum, award-winning duo Florida Georgia Line – will world premiere the highly-anticipated musical May We All in June 2022 as a special presentation of Tennessee Performing Arts Center’s Broadway at TPAC series.

Information on season tickets for Broadway at TPAC season will be shared at a later date with single ticket sales to follow.

“TPAC is looking forward to welcoming everyone back to the theater again, and we can’t wait to share all the new and uplifting arts experiences we have in store for you next year,” says Jennifer Turner, TPAC President and CEO. “We’re delighted to host the world premiere engagement of May We All in the summer of 2022. It’s the perfect opportunity for fans of musical theater and fans of Country music to unite here in Music City for this special presentation before the launch of a national tour.”

Adding to the excitement, the Nashville debut will also jumpstart a 2022-23 national tour, which is being booked by Mollie Mann and Temah Higgins of Bond Theatrical.

“We’re so excited for May We All to be in residence in Nashville next summer,” says Lively McCabe Entertainment Executive Producer Michael Barra. “Music City followed by a coast-to-coast tour has been our goal for this show since day one, and the overwhelming response from Country music fans has granted us the opportunity to achieve this milestone. We’re so grateful to Jennifer Turner and her first-rate team at TPAC for their support and partnership on this production.”

Lively McCabe Entertainment and CuzBro Productions developed the stage musical in partnership with music giant BMG. Following production delays in 2020 due to the pandemic, the previously announced developmental production of May We All at Playhouse on the Square in Memphis, Tennessee, is now planning to proceed in Fall 2021.

A celebration of America’s heartland

May We All is a story of disappearing small-town America as seen through the hopeful eyes of its youth. Jenna Coates, a fledgling Country singer, reluctantly comes home after a rough start in Nashville, ultimately to discover that her roots may take her a lot further than her dreams.

May We All features a book by Troy Britton Johnson, Todd Johnson, and Eric Pfeffinger, with arrangements and orchestrations by Brian Usifer, and is directed by Shelley Butler.

Lively McCabe Entertainment and CuzBro Productions also announced last month that a film adaptation is in the works, directed by Andy Fickman (She’s the Man, Parental Guidance). Information on production cast, engagement dates, and ticketing information will be announced soon.

About the creative team

Brian Kelley – Brian Kelley is one half of GRAMMY-nominated, global superstar duo Florida Georgia Line – tallying 17 career #1 singles, 13.1+ billion streams, selling more than 33.9 million tracks and 4.7 million albums worldwide, logging 1.5 billion video views, and playing to over 4 million fans spanning massive arena and stadium headline tours. Stacking record-breaking accolades, FGL is Country’s only act to achieve two RIAA DIAMOND-certified singles [11X PLATINUM, #1 breakout, “Cruise” (the best-selling digital Country single of all time – SoundScan) and 10X PLATINUM, #1 “Meant to Be” with Bebe Rexha (holding the longest reign on the Billboard Hot Country Songs chart at 50 straight weeks)]. Kelley, alongside his bandmate Tyler Hubbard, just dropped their highly-anticipated fifth studio album, LIFE ROLLS ON (BMLG), featuring current Top 10 single, “Long Live,” while proving their in-demand collaborator status with current features: “Lil Bit” (Nelly), “It’s About Time” (Russell Dickerson), and “Drinkin’ Beer. Talkin’ God. Amen.” (Chase Rice). The multi-hitmaker has co-penned nine #1s in the U.S. and two #1s in Canada (comprised of outside cuts and FGL chart-toppers) alongside Hubbard, plus inked over 100 career tracks recorded in total (including FGL hits). Kelley and Hubbard are co-producers on a remix with Justin Bieber, plus projects with Chris Tomlin, TVM songwriters Canaan Smith and Blake Redferrin. Honored by ACM, AMA, Billboard, CMA, and CMT Music Awards, they’re co-hosts of FGL House Party Radio with Florida Georgia Line on Apple Music Country. Both a music and business mogul, Kelley’s diversified his enterprise into wildly successful partnerships with Hubbard, as well as solo projects. With Hubbard, they’ve established their own record label Round Here Records, publishing company Tree Vibez Music, collaborative space meet + greet, bar-restaurant FGL HOUSE, and have concocted easy-drinking spirits Old Camp Whiskey and Wolf Moon Bourbon (with Jason Aldean). On his own, Kelley is gearing up to release solo music, while actively all-hands-in on an upcoming musical and feature film, both titled “MAY WE ALL,” with his production company CuzBro Productions (acting as Co-Founder and Principal alongside his cousin Stephen Snedden). He’s also launched cult-favorite brand Tribe Kelley with his wife Brittney, where they operate brick-and-mortar location Tribe Kelley Surf Post (Grayton Beach, FL) that’s stocked with the high-quality brand’s transitional clothing, accessories, and wellness line, as well as a webstore full of all items that are domestically and ethically made in the U.S.A. In addition, Kelley’s teamed up with Oyster City Brewing Company. Committed to supporting various charities together like St. Jude, the Kelleys are passionate about exploring the outdoors in their downtime in Kelley’s home state of Florida, alongside their four German Shepherds – Sage, Smoke, Stone, and Sunday.

CuzBro Productions (Producer) – A creative powerhouse emerging in television and film production, CuzBro Productions was formed as the brainchild of Florida Georgia Line’s Brian Kelley (Co-Founder and Principal) and his cousin, actor Stephen Snedden (Co-Founder and President of Production), with writer Justin Halliwell serving as Partner and President of Development. Rooted in hard work, passion and authenticity, CuzBro Productions is dedicated to conveying compelling original stories and creating vivid, authentic worlds with inspired programming that speaks to the heart and humanity of all viewers. Represented by WME, the newly launched company has several television and film projects already in the works, with details expected to announce soon.

Lively McCabe Entertainment (Producer) – Led by producer Michael Barra, this global live stage production company specializes in packaging and adapting iconic intellectual property into new stories for theater, film, and television. Projects include the stage adaptation of Clue – which is currently the most-produced play in the U.S. – based on the iconic Paramount Pictures film and Hasbro board game. Other projects include the stage musical adaptation of the MGM film Mystic Pizza, the musical Punk Rock Girl, with a book by Joe Iconis (Be More Chill) in partnership with BMG and featuring artists such as Blondie, Avril Lavigne, Pat Benatar, Joan Jett and Gwen Stefani, and multiple television projects based on music IP set for this season. Visit www.livelymccabe.com.