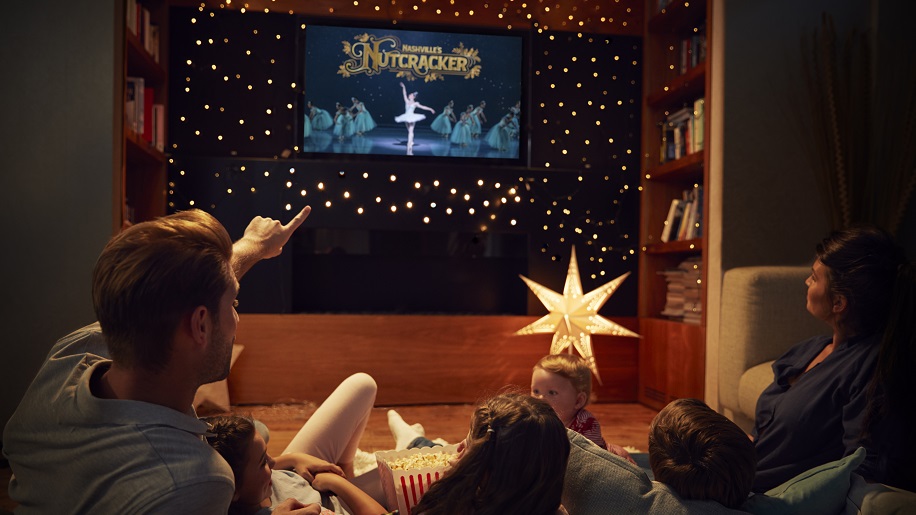 Nashville Ballet, in partnership with NewsChannel 5, will present a free televised premiere of a full-length Nashville’s Nutcracker on Friday, December 18, featuring an introduction and narration by former Tennessee Titan (and TPAC Board Member) Eddie George.

The televised premiere will replace the previously scheduled in-theater production at out of an abundance of caution amid COVID-19.

“For the past 12 years, we have brought the community together to celebrate the holiday season with Nashville’s Nutcracker,” said Nashville Ballet Artistic Director Paul Vasterling. “While we can’t celebrate in person this year, the televised performance will allow families and friends to safely continue their holiday traditions with us while also providing the unique opportunity to bring the transformative power of dance to more than two million Tennessee residents to begin new ones.”

Attracting more than 30,000 attendees each December, Nashville Ballet’s made-for-television production of Nashville’s Nutcracker is the first in the company’s history. The two-hour performance will feature creative ways to engage audiences (such as George’s introduction and narration) as they take a sparkling—and safe, socially distant—journey through the Land of the Sweets and Music City’s past.

“The holiday season just isn’t complete without Nashville’s Nutcracker,” said Lyn Plantinga, Vice President and General Manager at NewsChannel 5. “Nashville’s Nutcracker puts a special spin on the classic tale by incorporating our city’s iconic landmarks, characters, and history. Our partnership with Nashville Ballet allows us to bring this experience into our viewers’ living rooms for the first time. It’s a special holiday gift for our community as we all navigate a new way to celebrate this season.”

In addition to the televised premiere, NewsChannel 5 will present a unique behind-the-scenes special leading up to its debut to provide coveted access into the making of the holiday classic.

The special will offer a sneak peek into Nashville’s Nutcracker rehearsals with its professional company dancers, a look into the glittering set design (which Nashville Ballet is constructing within its 12,000-square-foot warehouse), interviews with beloved characters, and more.

The free premiere of Nashville’s Nutcracker is sponsored in part by PNC Bank and will air at 7 p.m. CT.

Additionally, families can prepare for the production by watching the behind-the-scenes special in early December. To tune in, watch on NewsChannel 5, NewsChannel 5+, or the WTVF app that can be found on Roku, Apple TV, Fire TV, Amazon Alexa, and Google Play.

Known as one of the NFL’s premier running backs, Eddie George spent nine years in the National Football League where he won Offensive Rookie of the Year and led the Tennessee Titans to the Super Bowl in 2000. George attended Ohio State University where he won the Heisman Trophy, Doak Walker Award, and Maxwell Award. In 2005, George joined Fox Sports as a broadcast analyst for NFL pre-game and college football. Over the years, he was working on his acting skills. In 2012, he starred as Julius in Julius Caesar (Nashville Shakespeare Festival), in 2013 as the title role in Othello (Nashville Shakespeare Festival), in 2015 as Simon in The Whipping Man (Nashville Repertory Theatre), and in 2016 as Billy Flynn in Chicago (Broadway Debut). George  is married to Tamara “Taj” Johnson-George, a GRAMMY-nominated singer with the soul group SWV (“Sisters With Voices”) which has sold more than six million records.

The NewsChannel 5 Network is the number one source for local news in Middle Tennessee and Southern Kentucky, providing 24/7 coverage of breaking news, critical weather information, sports, and investigative reporting. NewsChannel 5’s award-winning coverage and community service can be found across multiple platforms including over-the-air on channel 5.1, our website and fully integrated app at www.newschannel5.com, and all video streaming services including Roku, Apple TV, Fire TV, Amazon Alexa, and Google Play. In addition, NewsChannel 5+ (over-the-air digital 5.2) is a fully local channel dedicated to coverage of local issues in-depth. The NewsChannel Network is part of the E.W. Scripps Company.