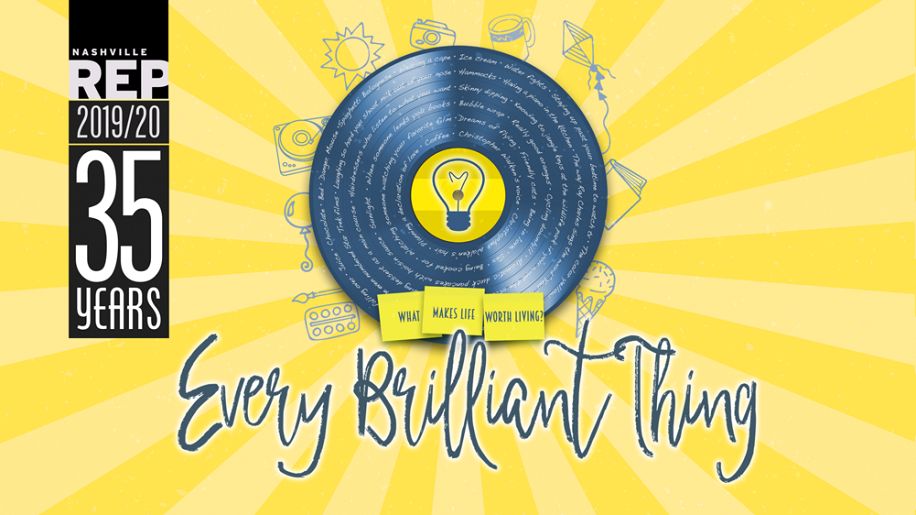 The list began when he was seven, after his mother’s first attempt.

A list of everything that makes life worth living: 1. Ice cream 2. Water fights 3. Staying up past your bedtime and being allowed to watch tv 4. The color yellow 5. Things with stripes 6. Rollercoasters 7. People falling over.

As the narrator experiences university, love, and his first heartbreak, the list of the sole performer in Nashville Repertory Theatre’s Every Brilliant Thing — which runs Nov. 7-10 at TPAC’s Johnson Theater — grows to encapsulate thousands of reasons to love life, both simple and profound.

For one weekend only, this intimate and immersive show will bring audiences in and make them feel apart of the life-affirming play written by English playwright Duncan Macmillan.

“Happiness always scared me because it was always followed by… you know,” says Cabus’ character in the show. “Things get better. They may not always get brilliant, but they get better.”

No stranger to Nashville theater, Cabus recently played Prospero in Nashville Shakespeare Festival’s production of The Tempest, and will revive his acclaimed one-man performance of Charles Dickens’ A Christmas Carol for local students later this month.

An immediate hit at the The Edinburgh Festival in 2014, Every Brilliant Thing was later filmed during its off-Broadway run at the Barrow Street Theatre and broadcast on HBO.

Peppered with audience interaction and the music of artists including Ray Charles and Etta James, Every Brilliant Thing is designed to bring audiences in and make them feel like part of the story. That is why attendees should be prepared to be called upon to read one of the items from the list of brilliant things, while others will be enlisted to play small roles — such as his father or a school counselor.

One brilliant thing is for sure: Audiences will leave this show looking at the world a little bit differently and more aware of all the small things that make life worth living.

“If you live a long life and get to the end of it without ever once having felt crushingly depressed, then you probably haven’t been paying attention,” Cabus’ character continues.

Making her directorial return to Nashville Rep is Lauren Shouse, who directed the Rep’s production of Avenue Q last season.

Audiences will also be able to put pen to sticky note after each show, with Nashville Rep inviting all attendees to add their own brilliant things to a board in the lobby.

After the performance on Friday, Nov. 8, Nashville Rep and Centerstone will host a Talkback to discuss the show’s themes of mental health and suicide. The panel will feature Centerstone leaders Becky Stoll, Vice President for Crisis and Disaster Management, and April Scott, Infant and Early Childhood Program Manager. Every Brilliant Thing’s director Lauren Shouse and star Mark Cabus will also be on the panel. LaTonya Turner will moderate.

Every Brilliant Thing begins on November 7 and continues through November 10 at TPAC’s Johnson Theater. Purchase tickets and learn more by visiting nashvillerep.org or calling the box office at 615-782-4040.