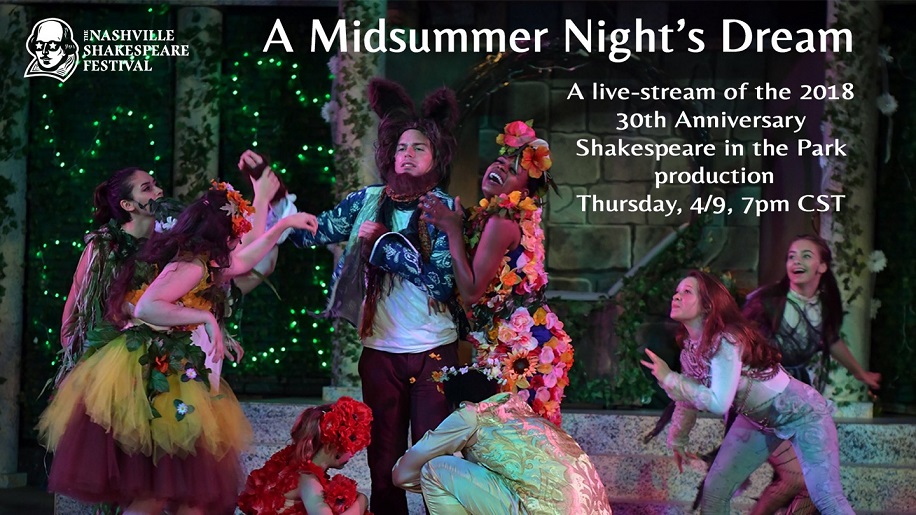 What better way to get through this mid-spring nightmare than ‘A Midsummer Night’s Dream’?

The COVID-19 pandemic has put the virtual stamp on meetings, music, and more — and now the Bard joins the list courtesy of the nonprofit Nashville Shakespeare Festival.

A production of A Midsummer Night’s Dream that was held a couple of summers ago at the Centennial Park band shell in Nashville can now be enjoyed from the comfort of your own home as Nashville Shakes presents a Facebook Live version Thursday, April 8, at 7:00 p.m.

“As people across the country are staying home due to the COVID-19 pandemic, Nashville Shakes is excited to help bring people together, virtually, with a watch party and revisit an enchanting, memorable summer,” Carrie Brewer, marketing director for the Nashville Shakespeare Festival, said in a press release. “Several members of the cast and crew will be watching and commenting during the live stream, which will only add to the fun.”

Thursday’s live-stream version of A Midsummer Night’s Dream is from the 30th anniversary production of Shakespeare in the Park that was held at Centennial Park in August 2018. This classic comedy of love and magic that one reviewer called a “marvelous treat” was directed by Jaclynn Jutting with an original score by Rollie Mains.

That same production was held a month later at Academy Park in Franklin, and between the two venues, more than 14,000 people saw the live production.

The live-streaming event is free, family-friendly, and will be approximately an hour and a half in length. A Facebook account is not needed to tune in. There will be an opportunity to donate to NSF on its website and on Facebook.