Home > Not your average musical, ‘SpongeBob’ floods TPAC with a deep sea of diverse songwriters Nov. 5-10

Not your average musical, ‘SpongeBob’ floods TPAC with a deep sea of diverse songwriters Nov. 5-10 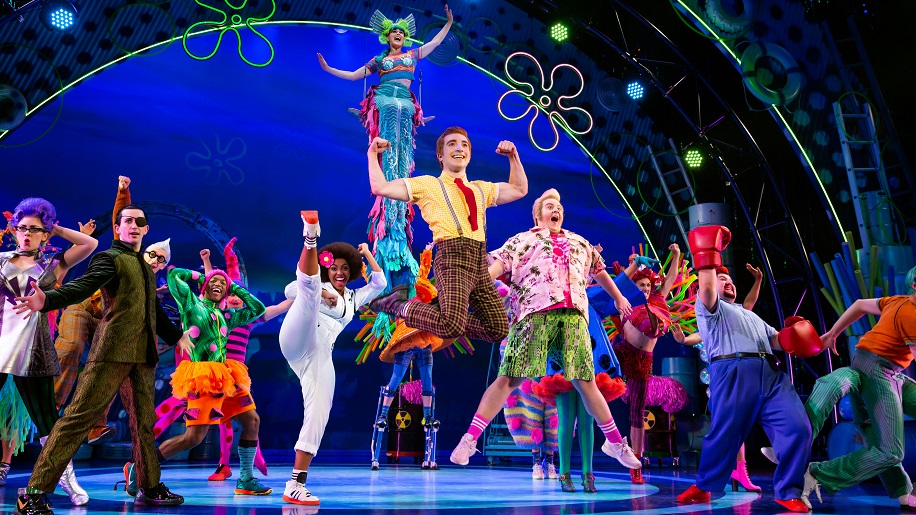 The Company of 'The SpongeBob Musical' Photo by Jeremy Daniel

Not every Broadway conductor conducts their orchestra with a toothbrush.

But since The SpongeBob Musical — which floats into TPAC Nov. 5-10 — isn’t your average musical, Patrick Hoagland is not your average conductor. 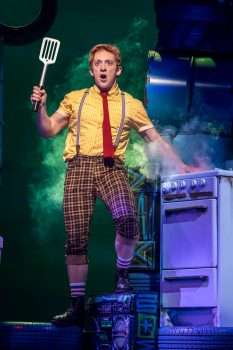 Nashville may not be a pineapple under the sea, but that won’t stop ‘The SpongeBob Musical’ from splashing its way into TPAC Nov. 5-10

“Yes, SpongeBob hands me a toothbrush and a spatula during the opening number and I get to conduct with those for a little while,” Hoagland says. “This show is unusual in a number of ways.”

And those aren’t the only unconventional prop handoffs for Hoagland throughout the show.

“I get handed a little block of cheese at one point, half a remote, a backpack, a lantern, some nun chucks,” Hoagland adds. “There’s definitely a lot going on.”

Amid all these unorthodox stage interactions, Hoagland must simultaneously conduct the orchestra, keeping track of the continuously changing tempos and genres of the show’s expansive Pop-Rock score.

“It takes some coordination,” he explains. “In Squidward’s big production number, there’s a section where I’m playing, conducting with my head, and handing Squidward a hat. It’s definitely a little crazy.”

Perhaps one of the reasons for the show’s orchestral prominence is because The SpongeBob Musical’s score features one of the most unique and diverse groups of songwriters ever assembled for a Broadway production: Lady Antebellum, John Legend, The Flaming Lips, David Bowie & Brian Eno, Sara Bareilles, Panic! At the Disco, Plain White T’s, They Might Be Giants, T.I., Alex Ebert of Edward Sharpe & The Magnetic Zeros, Steven Tyler and Joe Perry of Aerosmith, Cyndi Lauper, and Rob Hyman. 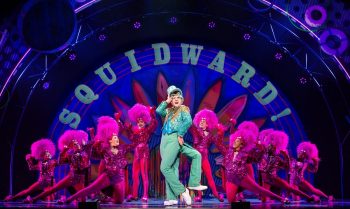 Cody Cooley as Squidward Q. Tentacles and The Company of The SpongeBob Musical
Photo by Jeremy Daniel

And for all those wondering, “what about the beloved theme song from the TV cartoon the show is based on?” Worry not. Patchy the Pirate and his parrot perform the timeless theme for the grand finale.

Now, let me tell you a few things that The SpongeBob Musical is not.

The SpongeBob Musical is not a jukebox musical, filled with famous songs by familiar Pop acts. These are all original songs that nourish a nautical narrative of undersea community-building, mass hypnosis, a rock festival, anti-science hysteria and an invention called the “Erupter Interrupter.”

This is not SpongeBob on Ice or anything like that, so don’t expect to see big a big foam head of the beloved porous protagonist. The staging features actors in colorful clothing rather than the oversized masks and full-body suits associated with other cartoon-to-stage shows.

Lastly, The SpongeBob Musical is not simply a kid’s show. Like the Nickelodeon cartoon on which it’s based, it strives to entertain the whole family.

“It appeals to everyone — young or old, SpongeBob fans or non-SpongeBob fans,” Hoagland says. “Even if you haven’t been watching the cartoon for the past 19 years, you can still come in and have a fantastic time because it’s such a fun, colorful and uplifting show. It’s completely unlike anything I have ever seen before.”

Though the number of musicians in the orchestra is smaller, Hoagland is using the same arrangements created for the Broadway version by Tom Kitt, composer of Next to Normal and If/Then. 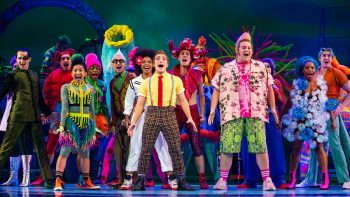 The Company of ‘The SpongeBob Musical’ Photo by Jeremy Daniel

The instruments used in the orchestra can be a varied as the score itself. As those who know SpongeBob’s TV exploits would expect, ukuleles are involved.

“We have mandolin, lap steel, banjo, ukulele, upright bass, a few different acoustics as well as electric guitars,” Hoagland says. “There’s quite a lot going on.”

Hoagland must stop playing keyboards occasionally so he can pick up an accordion. In addition to the band’s two guitarists playing five different types of guitar each, the orchestra provides complex vocal harmonies among the funny cartoon voices. There’s a designated reed player cycling between six different instruments and a trumpet player who also doubles on bugle horn. There’s also a bassist, a trombone, a drummer and, to provide special sound and music effects, a Foley Artist.

“The Foley Artist is on the stage for the entire show and more often than not, he’s just creating sounds,” Hoagland says. “He has a huge rack full of bike bells, squeaky toys, cow bells and temple blocks, in addition to some electronic things to basically create almost all of the sound effects for the show in real time.” 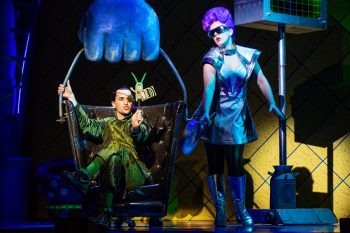 The show was conceived and directed by Tina Landau, an accomplished New York-based director of new plays and musicals. It was Landau’s idea to use so many different composers for the score, giving each of them a specific plot point or theme to concentrate on.

The musical ran for a year on Broadway, closing September of 2018. It was nominated for 12 Tony Awards — more than any other that year — and won for Best Scenic Design.

Landau is still heavily involved in the touring production — as is the entire Broadway design team. The musical’s producers specifically sought out creative, non-traditional theater artists to bring the quirky cartoon to the stage.

With a bubbly book written by off-Broadway playwright Kyle Jarrow, The SpongeBob Musical is also not just for the kiddos. Like the Nickelodeon cartoon on which the musical is based, it strives to entertain everyone — young and old.

Lorenzo Pugliese, who just graduated in May at the University of the Arts in Philadelphia, stars as SpongeBob on his first-ever national tour. 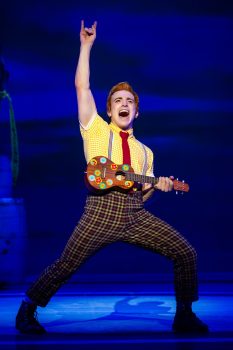 “It feels like I won the lottery,” Pugliese said. “It still doesn’t fully feel real.”

While still a student, Pugliese went to the open call for the role in March, saying his “teachers were really cool” about letting him miss class.

“I wasn’t even going to go, but my friends were really insistent that I did,” Pugliese explains. “I’m so glad I did, though. I got the call maybe a week after I graduated and was jumping up and down in excitement.”

For Pugliese, this role is personal. He said he grew up with the cartoon every Saturday.

“It was one of my favorite shows to watch as a kid,” he says. “I actually used to wake up every morning, open my window and say, ’good morning world and to all who inhabit it!’ just like SpongeBob. And that’s actually my first line in the show, so it’s a really cool full circle for me.”

Near the end of the show, everyone onstage picks up a musical instrument and joins the band, including Pugliese and gets directed by Hoagland.

Additional songs are by Yolanda Adams, additional lyrics by Jonathan Coulton and choreography by Christopher Gatelli.

After 11 seasons, two movies and more than $13 billion in merchandising revenue, the animated residents of Bikini Bottom have left their underwater dwellings to conquer the Broadway stage.

SpongeBob SquarePants was created by Stephen Hillenburg and originally aired on July 17, 1999. Voiced by Tom Kenny, the character-driven cartoon chronicles the nautical and sometimes nonsensical adventures of SpongeBob, an incurable optimist and earnest sea sponge, and his undersea friends.

As the most widely distributed property in Viacom International Media Network’s history, SpongeBob SquarePants has reigned as the number-one kids’ animated series on TV for the last 17 years, generating a universe of beloved characters and a global fan base. The show has been seen in more than 208 countries and territories, translated into more than 55 languages and averages more than 100 million total viewers every quarter.

Nashville may not be a pineapple under the sea, but that won’t stop The SpongeBob Musical  from splashing its way into TPAC’s Jackson Hall for the first time Nov. 5-10.

“I will always vow and pledge allegiance to this town that I hold dear, for all are welcome here.”

–SpongeBob Squarepants in The SpongeBob Musical