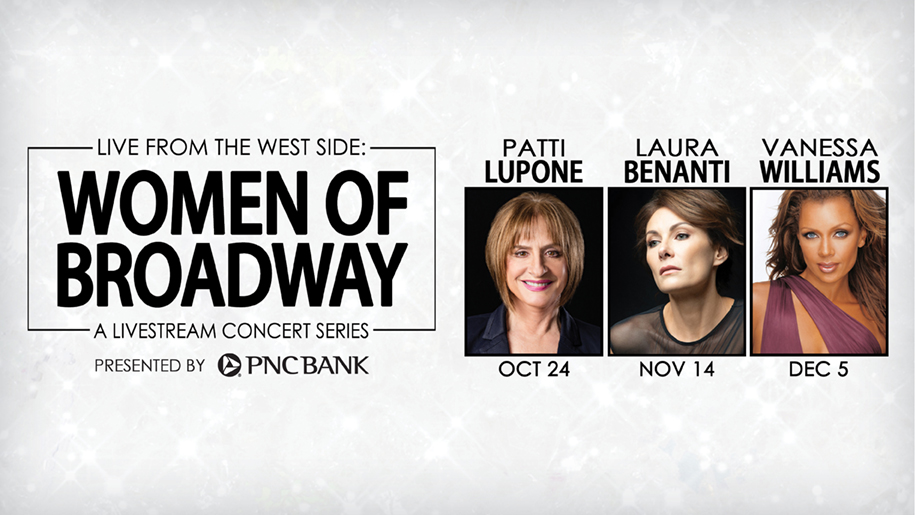 TPAC is joining a select group of arts organizations across the country in presenting a a three-part virtual concert series, Live from the West Side: Women of Broadway, featuring two-time Tony Award winner Patti LuPone on October 24, Tony Award winner Laura Benanti on November 14, and critically acclaimed actress and singer Vanessa Williams on December 5.

Tickets include access to each livestream performance at 7:00 p.m. CT plus an additional 72 hours of on-demand viewing of a video recording of the livestream, available beginning one hour after each live broadcast ends.

Each show, transmitted live in HD with professional sound mixing, will feature a mix of Broadway show tunes, pop songs and personal stories from the life of each headliner. Performances will take place at The Shubert Virtual Studios on Manhattan’s West Side. At-home audience members will be invited to email in questions to be answered during the livestream.

More than 20 nonprofit arts presenters around the country are sharing the livestreams, which are a co-production of Dallas Summer Musicals and Entertainment Benefits Group.

Experience the music and stories of a Broadway icon in your living room on October 24 when Live From the West Side: The Women of Broadway presents Tony, Grammy, and Oliver Award winner Patti LuPone. LuPone can currently be seen as Avis Amberg in Ryan Murphy’s Netflix series Hollywood and recently won the Olivier and WhatsOnStage awards for her performance as Joanne in the Stephen Sondheim-George Furth musical Company in London’s West End. Over the course of her career, LuPone has won Tony and Drama Desk Awards for her roles as Eva Peron in Evita and Rose in the most recent Broadway production of Gypsy, also winning a Drama Desk Award for her work in Anything Goes. She has been nominated for Tony and Drama Desk Awards for her roles in The Robber Bridegroom, Anything Goes, Sweeney Todd, Women on the Verge of a Nervous Breakdown, and War Paint. A graduate of the first class of the drama division of New York’s Juilliard School and a founding member of John Houseman’s The Acting Company, Lupone regularly performs in solo shows and concerts, on Broadway, and in television and film. She is the author of The New York Times bestseller Patti LuPone: A Memoir.

Live From The West Side: The Women of Broadway welcomes Tony Award winner, singer, actor, and activist Laura Benanti on November 14 for an extraordinary night of musical performance. With Broadway credits ranging from the My Fair Lady revival and Meteor Shower to She Loves Me, Benanti won a Tony Award for Best Featured Actress in a Musical for the 2008 production of Gypsy – among five career nominations to date. Her performance in Women on the Verge of a Nervous Breakdown was honored with the Drama Desk Award and Outer Critics Circle Award. Simultaneously, she enchanted audiences on the small screen, appearing on Younger, Supergirl, Nashville, The Good Wife, Nurse Jackie, and films including WORTH and the upcoming Here Today. Benanti’s recent social media campaign, #SunshineSongs, which invited students whose school musical productions were canceled due to the pandemic to share videos of their performances on social platforms, generated over 4 million impressions and received over 10,000 submissions, attracting celebrities like Lin-Manuel Miranda and Jennifer Garner to participate. Based on its popularity, HBO Max has partnered with Benanti to release a documentary special, Homeschool Musical: Class Of 2020, this fall. Benanti will release new solo music from Sony Music Masterworks this year.

Live From The West Side: The Women of Broadway welcomes critically acclaimed actress and singer Vanessa Williams for an evening of music on December 5. Williams is one of the most respected and multi-faceted performers in the entertainment industry. Having sold millions of records worldwide, Williams has achieved numerous #1 and Top 10 hits on various Billboard Album and Singles charts across various music genres. Her work in film, television, recordings, and the Broadway stage has been recognized by every major industry award including 4 Emmy nominations, 11 Grammy nominations, a Tony nomination, 3 SAG award nominations, 7 NAACP Image Awards and 3 Satellite Awards. Williams received a star on the Hollywood Walk of Fame in 2007. Recent Broadway credits include The Trip to Bountiful, After Midnight, and Hey, Look Me Over at New York City Center. She was recently in previews for City of Angels in West End when production was forced to pause due to COVID-19. One of the world’s most accomplished concert artists, Williams performs regularly with prestigious symphony orchestras, recently with the National Symphony Orchestra at The Kennedy Center. Her autobiography, You Have No Idea, is co-written with her mother Helen Williams and was a New York Times Best Seller in 2012.

Institutional sponsors for TPAC include Nissan North America and Coca-Cola. TPAC is funded in part by support from the Tennessee Arts Commission and the Metropolitan Nashville Arts Commission.