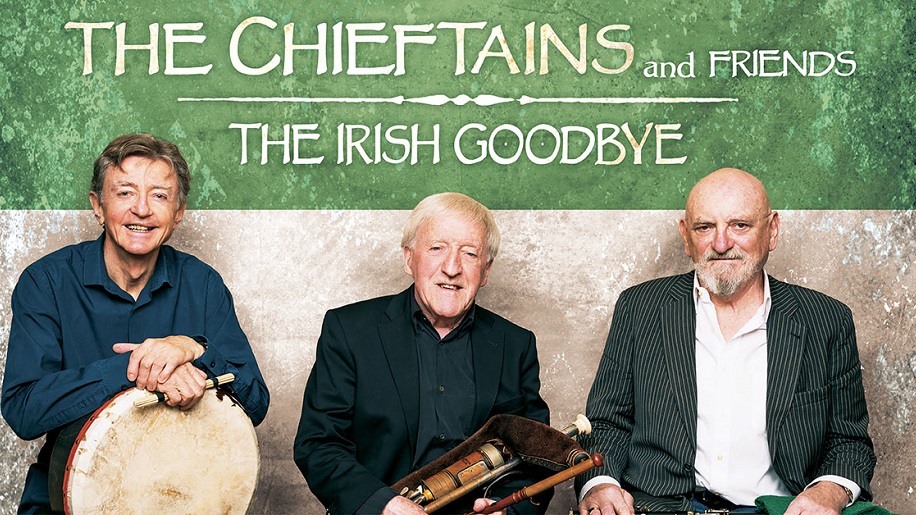 On a quiet Christmas Eve in the early 1940s, a six-year-old Paddy Moloney strolled into Bolger’s music shop on Dublin’s Chatham Street holding his mother’s hand. He picked out a little plastic tin whistle for himself and she bought it for one shilling and nine pence.

“I saw this whistle in the shop window and said, ‘what about that, mommy?’” Moloney remembers. “I knew money was scarce for us back then and every shilling seemed like a fortune, but she got it for me anyways.”

Neither of them could have fathomed on that fateful day that this young lad would go on to be one of Ireland’s greatest whistle players, a gifted composer and the founder of one the world’s most beloved Irish folk bands.

Now, The Chieftains are celebrating a career spanning almost six decades (and includes more than 50 albums, six Grammys and an Oscar) at TPAC’s Jackson Hall Feb. 19 for their Irish Goodbye tour.

Moloney’s ‘Chieftains’ will be joined Feb. 17 by special guests, including local dancers, singers and musicians.

Moloney formed The Chieftains in 1962 with the dream of sharing the sounds he loved from his Irish upbringing with the rest of the world.

“I grew up in a family of musicians in this little cottage that seemed like a palace at the time,” he explains. “We would sit around and tell stories and play music every night. Music became everything to me, even more important than eating.”

Believe it or not, Moloney and The Chieftains would go on sharing traditional Irish music not only with the rest of the world, but even beyond.

In 2010, the band sent instruments with NASA astronaut Cady Coleman to the international space station to record three songs for The Chieftains’ 50th anniversary album — the first time anyone has ever recorded an album in outer space.

Even though they’ve performed for British royalty, Pope John Paul II, in front of The Berlin Wall and even on the Great Wall of China, Maloney says there’s always been something special about coming back to Nashville — where the band has worked with the likes of Béla Fleck, Rosanne Cash, Emmylou Harris and Ricky Skaggs.

“I always considered Nashville like another part of Ireland, down to the south or something,” Moloney says. “When I’ve come over there and played with musical geniuses like Sam Bush or Jerry Douglas or Earl Scruggs, they pick everything up so easily. You don’t have to duck and dash. You just play the tune three or four times and they have it.”

The Chieftains were the first Western band to perform on The Great Wall of China.

The band’s name came from the book Death of a Chieftain by Irish author John Montague. At a time when rock ‘n’ roll was king, Moloney formed the group in 1962 “not only to bring back traditional Irish music, but to infuse it with new life.”

“Those days were all about the rock ‘n’ rollers you know, your Bill Haley’s and your Elvis’. It wasn’t a thing to be seen walking down the street with a fiddle under your arm,” Moloney says. “But things have changed massively since then. It really hit me playing on the Great Wall of China when I looked around and saw Chinese people singing along to our songs.”

It seems if you were “anybody” in the music business for the past half century, you’ve collaborated with The Chieftains. They’ve worked with everyone from Tom Jones and Elvis Costello to Van Morrison and Sting — even operatic tenor great Luciano Pavarotti.

The Chieftains have begun their Irish Goodbye tour, which is the last tour of the 57-year-long band.

Their latest album, Voice of Ages, includes recordings of traditional songs with help from indie-rocker Bon Iver, folk group The Civil Wars and bluegrass quintet The Punch Brothers, among others.

For Moloney, who plays many other Gaelic instruments including the bodhrán and button accordion, it’s been an honor to spread his culture beyond his country’s borders.

Maloney says even “Lord of the Dance” Michael Flatley toured with them for seven years before making his millions.

“Unfortunately, I wasn’t in on that,” Moloney laughs. “But who cares? The most important thing is the music.”

Music experts credit The Chieftains with bringing traditional Irish music to a worldwide audience, so much so that the Irish government awarded them the honorary title of ‘Ireland’s Musical Ambassadors’ in 1989.

So, with all these connections and years of experience under his belt, does Moloney ever get nervous before, during or after a performance?

“I still get nervous every time,” Moloney says. “It could be forty people, or it could be 300,000 people as it was at the wall, I treat every performance the same. I think those faces in front of me are so important. I want to get across the message that we’re still playing traditional folk music. And this is the real stuff.

Photos courtesy of The Chieftains.