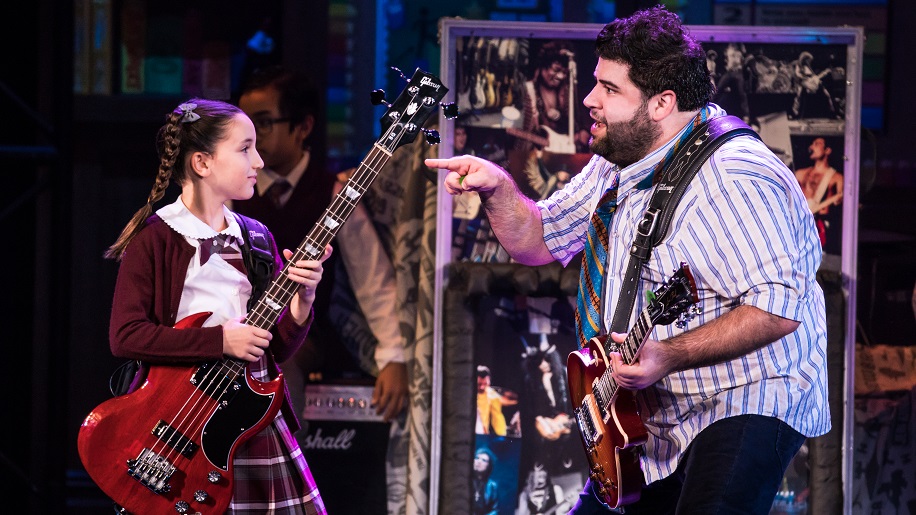 Theodora Silverman and Rob Colletti in the 'School of Rock' tour. Photo by Matthew Murphy.

Taking a hit Broadway show on the road is not without its challenges. But things become all the more complicated when half the cast is still in elementary school.

When it comes to School of Rock – the Andrew Lloyd Webber musical that arrives at TPAC on September 11 – Associate Director David Ruttura calls it “a real joy.”

“This show is especially unique because we’re casting so many kids,” says Ruttura, who oversees both the Broadway company and the North American National Tour. “We start by looking for exceptional musicians. There’s a short audition process where we also look at personalities and individual skill sets. But we really start with musicianship, and let me tell you, these kids are prodigious musicians.”

“We cast children between 9 and 12 years old. But by the time we meet them, most of these kids have had a history with lessons – some starting as young as 2 or 3 years old,” Ruttura said.

Once cast, youngsters attend regular rehearsals and tutoring sessions, along with separate band rehearsals. And every six months or so, the cast turns over roughly half the kids.

“Kids move on for various reasons,” Ruttura says. “They grow up, their voices change. And, of course, touring is really hard on these families – they sacrifice a lot for the experience. We talk about that a lot with the kids – this is really a singular experience, so just enjoy it.”

Rob Colletti and the kids of ‘School of Rock.’ Photo by Matthew Murphy.

Ruttura visits the tour every 4-5 weeks, checking to see how things are going and coordinating with the management team.

“As the associate director, my job is really to maintain the vision of our director, Laurence Connor. Once a show is up and running, it’s important to make sure each performance is just as good, just as fresh as opening night,” he said. “So I handle casting replacements, coordinate with creative management and work closely with our wonderful stage manager.”

Fans of the 2003 movie, which was directed by Richard Linklater and featured Jack Black as die-hard rock-and-roller Dewey Finn, will be happy to know that much of the film’s storyline remains intact. But Ruttura says that composer Andrew Lloyd Webber and book writer Julian Fellowes (of “Downton Abbey” fame) go much deeper with the musical.

“There’s more of a focus on the kids – we get to know them a little better, digging into their stories and understanding the pressure that’s put on them. So you have all those fun Jack Black-y moments you might expect, but there’s so much more. Rob Colletti is really terrific as Dewey, and he shares a real bond with the kids. And, of course, the music is so much fun.”

“It’s interesting because I think audiences were initially surprised to hear that Andrew Lloyd Webber was involved with School of Rock. But what people forget is that this show is really more in line with what he wrote early in his career – Jesus Christ Superstar, Evita, Joseph and the Amazing Technicolor Dreamcoat. The rock show is really what started his career, and that’s where his heart is.”

But beyond the fun of returning to his roots, Lloyd Webber says he also was inspired by the story’s message about the transformative power of music.

“I suppose the thing that I picked up on immediately was that it’s about the incredible empowering force that music can be,” Lloyd Webber said. “And, therefore, it’s really about how music changes the life of the kids in the show, and also changes the life of the leading man, because he finds himself, in a way, through the children and the music that they’re making.”

The cast of the ‘School of Rock’ tour.

That spirit of strength and creativity is especially clear in Act I’s big number, “You’re in the Band,” where the audience first gets to hear the kids play together.

“And then, bit by bit, he’s pieced together the band. And it’s one of those musical theater moments,” he said. “When they finally come together, it’s almost like when Eliza in ‘My Fair Lady’ speaks ‘proper.’ You suddenly say: ‘Oh my god, they actually can do it!’ It’s one of the moments I find great in the show. It still gives me – and I’ve seen it quite a few times – a bit of a buzz.”

Nashville audiences are sure to be buzzing, as well. To learn more about School of Rock and buy tickets for its one-week engagement, September 11-16, visit TPAC.org.