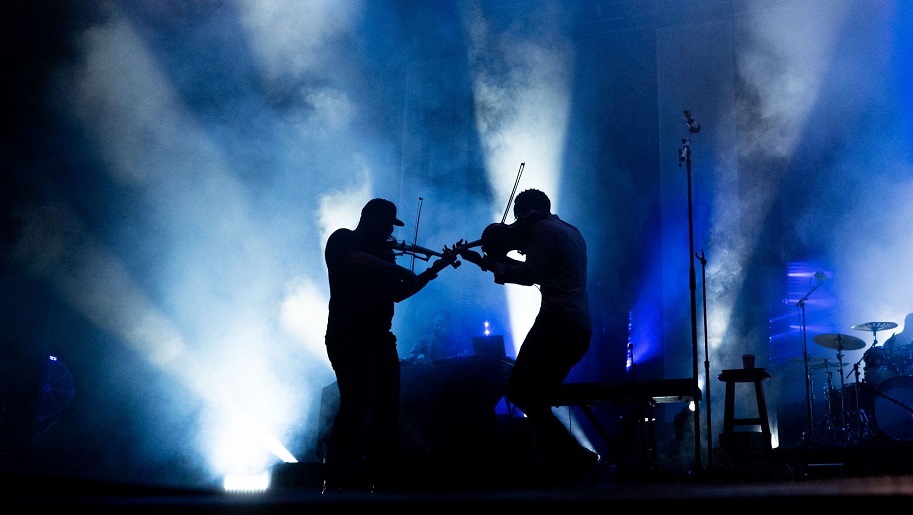 If your idea of classical music is limited to stuffy concert halls and tuxedos, then you clearly haven’t experienced Black Violin.

Featuring a dynamic pair of classically trained artists – violist Wil Baptiste and violinist Kev Marcus – Black Violin has been shattering musical and cultural stereotypes from the very beginning. The two first met in high school, and began playing together in orchestra class. They went their separate ways for college but soon met up again, establishing a distinctive sound all their own – a blend of classical, hip-hop, jazz and funk that has been described as “classical boom.”

“We studied classical music in high school while listening to the golden age of hip-hop, so it was natural for us to combine the genres in an authentic way,” says Marcus. “We’ve known each other for over 23 years, and although we’ve grown as men and artists, we are very much the same kids from South Florida trying to do something different with the violin. After performing nearly 2,000 shows together over our career, we speak to each other through our music in a very unique way.”

That unique connection has taken the musicians around the world, and led to collaborations with big names such as Kanye West, Wu-Tang Clan, Wyclef Jean, Lil Wayne and Alicia Keys. They’ve composed music for Fox’s television series, Pitch, and have appeared on HBO’s Ballers and the 2016 Heisman Trophy Presentation on ESPN, among others.

Currently crisscrossing the nation with their “Impossible Tour” – which arrives at War Memorial Auditorium on May 9 – the artists also are working on their latest studio album, which is expected to be released in early 2020.

“Our new album is about hope, and making the impossible possible,” Marcus says. “We can’t wait to let the world hear it.”

That positive, uplifting message certainly seems to be a constant for Black Violin, which takes time to work with students even while on the road. In fact, more than 30 students from Metro Nashville Public Schools and Music City Strings will take part in a 90-minute workshop with the artists, in preparation for the duo’s Nashville show.

“We feel a responsibility to share what we’ve learned throughout our lives with young kids all across the world,” Marcus says. “So we invite students to perform with us and close out the show. It’s an exciting moment for those kids, and hopefully it plants a seed, and lets them know that anything is possible.”

In keeping with that theme, Black Violin was recently named the “Turnaround Artist” for Mary M. Bethune Elementary School in Broward County, Florida. A national program of the John F. Kennedy Center for the Performing Arts, Turnaround Arts uses integrated arts education to transform struggling schools throughout the nation. Founded by President Obama’s Committee on the Arts and the Humanities in 2011, the program pairs participating schools with crucial resources – along with dedicated artists, who provide “mentorship, inspiration and support” to students and teachers.

“Turnaround Arts is an amazing program run by the Kennedy Center, and it puts artists like us in schools across the country. We have been awarded a school in our hometown in Broward County, and couldn’t be more excited to work with them to help them to think outside the box.”

But for now, Marcus says he and Baptiste are enjoying the road, and are eager to bring their sound back to Music City.

“We are excited to come back to Nashville and rock out,” he says. “Fans can expect a high-energy, get-out-of-your-seat atmosphere that is family friendly, and challenges everyone to think differently. It’s entertaining, educational and inspiring.”