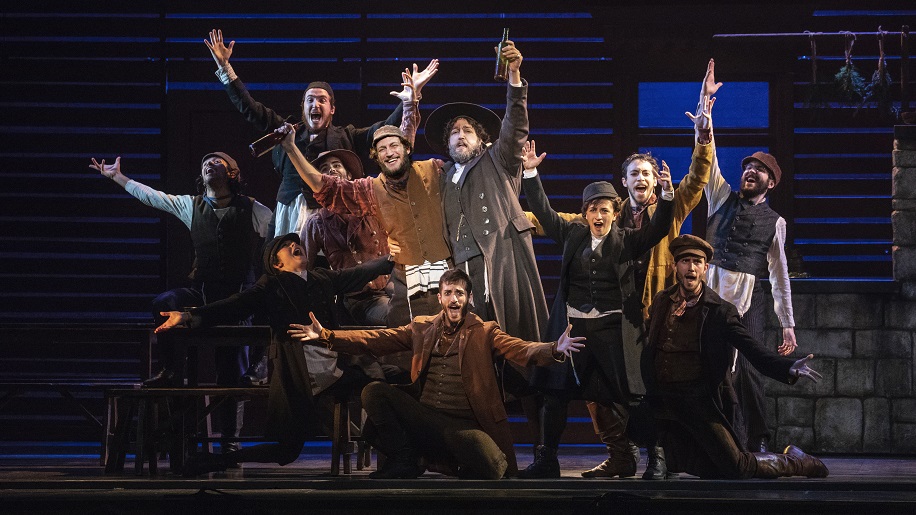 Yehezkel Lazarov, Jonathan Von Mering and the cast of 'Fiddler on the Roof.' Photo by Joan Marcus.

As a young man, the Pulitzer Prize-winning lyricist Sheldon Harnick studied violin at Northwestern University, hoping he might land with “a second-rate symphony orchestra somewhere.” But that all changed when his good friend Charlotte Rae loaned him her cast album from Finian’s Rainbow.

“Charlotte came back from Christmas vacation talking about the show, and said: ‘You, of all people, will appreciate this, Shel,’” says Harnick, whose storied career has spanned more than six decades and includes some of Broadway’s most beloved musicals. “I heard those wonderful Yip Harburg lyrics, and thought: ‘Now, that’s what I want to do.’ I was fortunate that Yip became a great friend and mentor when I came to New York.”

But it was with the late composer Jerry Bock that Harnick would forge his greatest musical partnership. Together, they would pen classics such as the Pulitzer Prize winner Fiorello! along with She Loves Me and Fiddler on the Roof.

“Jerry had a terrific sense of humor and, more importantly, a real sense of comedy. Steve Sondheim once said that it’s rare to find a composer who can write humor right into the music, but that was Jerry.”

With the Tony-nominated revival of Fiddler currently on tour (and set to arrive at Tennessee Performing Arts Center on June 25), Harnick says he is often asked about the musical’s enduring appeal.

Yehezkel Lazarov as ‘Tevye’ in the National Tour of ‘Fiddler on the Roof.’ Photo by Joan Marcus.

“To me, it all goes back to the original short stories of Sholem Aleichem,” he says. “He created this incredibly universal character in Tevye. Everyone can identify with him – there’s just so much humor and humanity there.”

And yet, Harnick insists that no one from the original creative team – including librettist Joseph Stein and director/choreographer Jerome Robbins – could have predicted the massive success of Fiddler.

“We just hoped that we could realize the beauty of Sholem Aleichem’s stories on stage,” he says. “We thought maybe if we were lucky, it might run a year or two.”

In fact, the original production of Fiddler on the Roof, which opened in 1964, would become the first musical in Broadway history to surpass 3,000 performances, holding the record for longest-running musical for nearly a decade. It earned nine Tony Awards – including Best Musical.

This latest revival is directed by Tony Award-winner Bartlett Sher (who has reunited much of his award-winning creative team from South Pacific and The King and I for this production) and choreographed by the acclaimed Israeli choreographer Hofesh Shechter.

“Bart is a wonderful director,” says Harnick, who received a Special Tony Award for Lifetime Achievement in the Theatre in 2016. “We were very lucky to get him. And, of course, it’s so gratifying to know that audiences are still embracing the work.”

But as satisfying as it may be to think back over the many successes and accolades, Harnick says that his favorite part of the creative process is still at the very beginning – “when it’s all just started, and it can go anywhere.”

“There are so many questions to ask, so many directions you might go – that’s always been really exciting to me,” he says. “I remember when Jerry and I were working on Fiddler, he would create several pieces for a scene, and then send them to me on tape. I would get so excited to listen to that music, to start putting those words together. And then as we started to polish up the songs, we would sit together in his studio – he had this great studio in his home in New Rochelle.  We sat there working, and finally decided that we needed an audience. So, Jerry had his wife come downstairs to listen, and at some point I looked over, and saw that she was in tears. And I thought: ‘Well, this is very encouraging – we must be doing something right.’”

Harnick celebrated his 95th birthday in April and shows no signs of slowing down.

“The best way to keep vital and healthy is to keep working,” he says. “Never stop. I work every day – it keeps me young.”

Harnick is currently working on a new operetta and is quite enthusiastic about Fiddler: A Miracle of Miracles – a new feature length documentary that “chronicles the life and themes of this iconic offering of American culture.”

“There’s been a lot of excitement around the documentary,” he says. “The producers knew that I had been a violinist, so they had the idea to get me sitting up on a roof, playing the fiddle – it was great fun!”

Get tickets to Fiddler on the Roof, playing June 25-30 at TPAC.