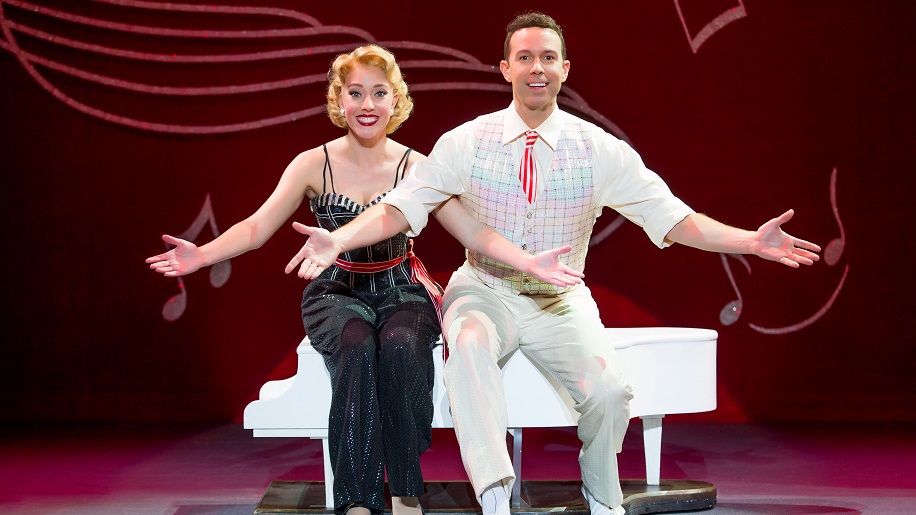 Tennessee Performing Arts Center will kick off the holidays in classic style November 13, with the return of Irving Berlin’s “White Christmas.” But for Nashville native Jeremy Benton, the season’s greatest gift is performing for his hometown crowd.

“It’s always so special to be back with family and friends,” says Benton, who grew up in nearby Springfield. “And I’m especially thrilled be sharing this wonderful show with Nashville.”

Based on the 1954 film starring Bing Crosby and Danny Kaye, “White Christmas” centers on a pair of song-and-dance Army buddies who set out to save a failing Vermont inn by staging the perfect holiday show – and fall for a sassy sister act in the process. Of course, the musical also showcases a slew of Irving Berlin hits, including “Blue Skies, “Happy Holidays,” “I’ve Got My Love to Keep Me Warm,” and the beloved title song.

“This show really has everything,” says Benton, who plays the Danny Kaye role of Phil Davis. “We often see multiple generations in the audience, which is really nice. Grandparents remember the movie, and they enjoy introducing the music to their children and grandchildren. There’s a lot of nostalgia and fun, and then there’s all that delicious tap choreography. [Director/Choreographer] Randy Skinner is such a master at constructing these big, iconic productions, and the audience response is always amazing.”

“It’s such a fun number – I never get tired of it,” he says. “It starts out with my character, Phil, and Judy, who is played by Kelly Sheehan – the best dance partner ever. So we start out, and the girls’ ensemble comes out, then the guys come out. It just keeps building and building. It’s really one of my favorite tap numbers ever.”

That’s a rather bold statement, considering Benton’s past performances include big dance shows such as “42nd Street,” “Anything Goes,” “Singin’ In the Rain” and more.

“I always joke that I only play old, dead Hollywood tap dancers. If you look at my career, it certainly seems that way. Fred Astaire, Bob Hope, Gene Kelly – I’ve played them all.”

And while there are specific challenges to taking on such familiar song-and-dance roles, Benton says it’s always a thrill.

“You don’t want to limit yourself by simply imitating what’s on film. It’s really important to find yourself within the character, otherwise it’s just going to feel like some karaoke version. I love looking for those nostalgia points, where you sort of tip your hat to the original. But you still have to be true to yourself, and make it your own. I’m never going to be Danny Kaye, but I can give an honest portrayal and still capture all the joy that I felt the first time I saw him in that movie – that’s where the fun is.”

In fact, Benton has many fond memories of watching classic Hollywood musicals with his grandmother, as he was growing up.

“My grandmother really introduced me to the American songbook. She had a stash of Irving Berlin, Cole Porter and Gershwin songs in her piano bench, and I loved them all. I remember watching ‘Singin’ In the Rain’ with her when I was maybe 10 years old. I saw Gene Kelly doing ‘Moses Supposes,’ and I just wanted those shoes so much. My mom was like: ‘You’re not going to get those shoes just to bang around the house. So if you get the shoes, you’re taking lessons!’ And I did. I started out with Nashville Ballet, and performed in many a ‘Nutcracker’ at TPAC. Later, I saw big shows like ‘Les Misérables’ and ‘Cats’ there. I think I was around 13, and just getting a taste for those big, epic musicals. I just remember my jaw being on the floor – I was hooked.”

After graduating from Western Kentucky University, Benton moved to New York City and joined the Broadway company of “42nd Street.” He would later join the national tour of that show, performing for his home crowd at TPAC.

“That was probably 2003 or 2004. I got my Equity card with that national tour, and I just remember being so excited to have so many folks in the audience. You know, it takes a lot of people to get a kid from Springfield, Tennessee to Broadway. So to come back and perform for the folks who loved and supported me along the way, that’s pretty incredible.”

He would return to TPAC in 2012, with the national tour of “Anything Goes.” And while he has been touring seasonally with “White Christmas” for the last five years, this will mark his first time performing the show in Music City.

“It’s such a great show, and everyone has always asked ‘when are you coming back to Nashville?’ Well, this is the year. Best of all, my oldest niece and nephew will be in the audience. This will be their first time seeing Uncle Jeremy perform live, and I can’t wait. We’re going to have a blast.”