PREVIEW: ‘The Book of Mormon’ returns with ‘outrageous fun and heartfelt message’ 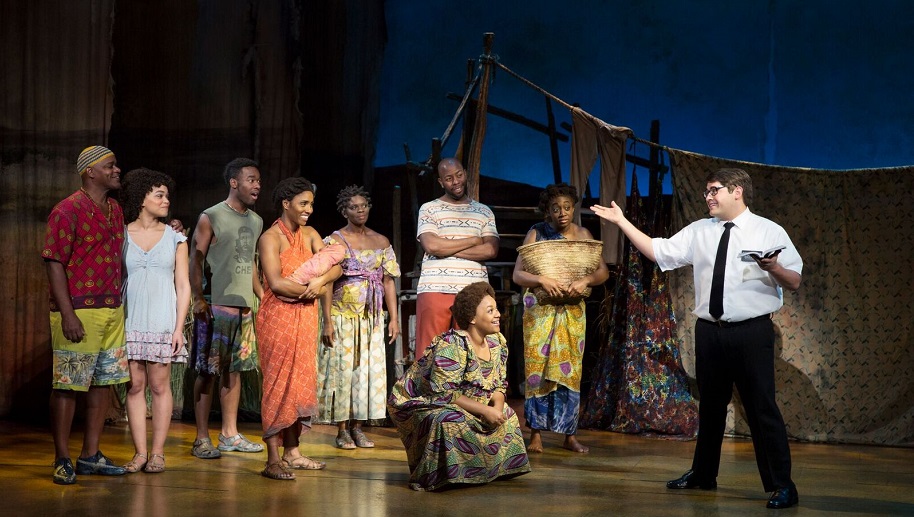 The company of 'The Book of Mormon' Tour

As a seasoned Broadway veteran, Ron Bohmer has seen a lot of scripts. But he still remembers the first time he read through The Book of Mormon.

“That was the first script I remember reading and actually laughing out loud – just from what’s on the page,” Bohmer says of the Tony Award-winning musical, which returns to Tennessee Performing Arts Center March 12-17.

“It’s such outrageous fun, and yet there’s really a heartfelt message behind it all,” says Bohmer, whose resume includes big-name Broadway productions and tours, including Ragtime, The Scarlet Pimpernel, The Phantom of the Opera and Sunset Boulevard, to name a few. “I think that’s what keeps audiences coming back. They’re totally disarmed, totally falling in love with these characters and the show. Plus, people keeping telling their friends. We’ve become such a favorite, with people coming back three, four or five times. I must admit that I didn’t expect the show to have the legs that it does. But I think it’s a combination of smart management and the fact that it’s just a really quality piece of theatre.”

Featuring book, music and lyrics by Trey Parker and Matt Stone (of South Park fame) and Robert Lopez (co-creator of Avenue Q), The Book of Mormon follows the irreverent adventures of a woefully mismatched pair of young missionaries, who are sent to a remote village in Uganda.

“One of the things that I really appreciate about this show is that Matt, Trey and [Co-Director/Choreographer] Casey Nicholaw are huge Broadway fans,” he says. “They love the art form, and they’ve worked in so many great nods to classic Broadway shows.

“I’ve been touring with the show for more than five years now, and I still love it,” he says. “This company has been so good to me. I’ve taken a couple of small breaks for other projects, but I’m always happy to come back.”

Bohmer takes on multiple roles in the production, including the “All American Prophet” Joseph Smith.

“Joseph Smith is probably my favorite because enough people in the audience know who he is, so it’s really fun to tell his story through the lens of this show. Plus, it’s a great comic death scene. I’ve pretty much died in every show I’ve ever been in, but this one is especially fun.

“I’m so looking forward to getting back to Nashville – just to breathe in the culture and the music,” he adds. “I spent two wonderful summers at Opryland back in the 1980s, so I have a lot of fond memories of the city. That’s one of the great things about being out on tour – it’s a wild ride, but one that I certainly enjoy.”

Life on the road has been just as gratifying for Henry McGinniss, who made his national tour debut with Mormon in April 2018.

“It’s definitely a challenge,” he says. “You’re constantly on the move, living out of a suitcase. But it’s been a great learning experience, and I love that I get to see so many cities around the country. I’ve experienced so many different things that I never expected – from a helicopter tour in Alaska to seeing the mountains in Colorado.”

As a swing, McGinniss covers eight “tracks” in The Book of Mormon, meaning that he is able to step in to play multiple chorus roles at a moment’s notice.

“It’s one of the toughest things I’ve ever done, but also one of the most rewarding. You have to know every line, every song, every move. And it’s really important to stay healthy. I’ve improved my diet, I get to the gym five days a week. I just can’t afford to be sick, because no matter what, the show goes on.

“It’s so silly and crazy funny. I think that number really takes the audience by surprise each night. It’s not like anything else they’ve seen up to that point in the show. Then all of a sudden, there’s just this explosion of energy – it’s amazing to be part of that.”