PREVIEW: The masterful mayhem behind ‘The Play That Goes Wrong’ 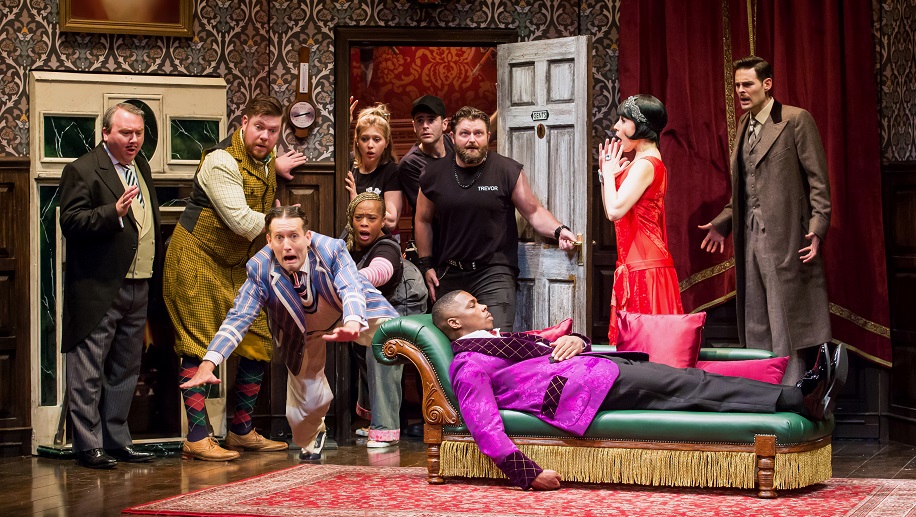 What started out as a humble one-act show performed above a pub has become a true international sensation. And having played on every continent except Antarctica (word has it that the producers feared “a frosty reception”) The Play That Goes Wrong is primed to conquer Music City when it arrives at TPAC’s Jackson Hall on October 9.

Co-written by London’s Mischief Theatre company members Henry Lewis, Jonathan Sayer and Henry Shields, The Play That Goes Wrong centers on a small-town British acting troupe that is struggling to stage a 1920s murder mystery. But as the evening unfolds, a series of theatrical mishaps befall the stalwart players of the Cornley University Drama Society – much to the delight of enthusiastic audiences.

“I think one of the reasons that people love this show so much is that they’re in on the joke,” says Scott Cote, who plays a novice actor named Dennis, who’s prone to mispronouncing even seemingly simple words. “Dennis is such a fun character to play. He tries so hard. He just wants to do well and make friends with everyone in the company. So, every time he makes a mistake, it really affects him.

“It’s such a wild ride,” adds Cote, who last visited Nashville as part of the 2017 national tour of Something Rotten!, “It’s sort of like Sherlock Holmes and Monty Python had a baby. With everything going on in the world right now, I think audiences really appreciate being able to sit back and just have a great laugh.”

Of course, many of the show’s laughs stem from Nigel Hook’s Tony and Drama Desk Award-winning set design. But beyond the “deliberately bad” stylings of a third-rate murder mystery – the manor house scenery includes mismatched moldings and a faux fireplace – there’s plenty of technical wizardry and more than a few surprises.

“Basically, everything that can go wrong, does. And the actors are left there to carry on, even as everything crumbles around them. It’s all very highly choreographed to ensure everyone’s safety,” Hook says. “But the audience reaction is so much fun. I don’t want to give too much away, but one of the things I really like is that it feels a little different every night. The audience reaction always feels very spontaneous and in the moment.”

Of course, that’s exactly as Hook intends it. A U.K.-based designer whose work has been seen on stages around the world, Hook says he was brought on board rather late in the creative process, following successful runs at The Edinburgh Festival and Trafalgar Studios.

“I came into the proceedings to add the set elements for an expanded two-act version for a U.K. tour,” he says. “The writers had written in the stage left area [which includes an upstairs study and even an elevator] and wanted somebody to ‘draw up’ their thoughts. All the technical nature of the trickery is the work of Alan Bartlett, who designs and makes sure that the ‘tricks’ are robust enough to trip, reset and go again.”

Hook says that he has even worked a few personal touches into the scenery, including his own initials buried within the gaudy wallpaper design.

“Most are so small you would need to be onstage to find them with a magnifying glass,” he says. “I don’t recommend trying without a hard hat. When I walk backstage, I am reminded of the old backstage pictures of the shark from ‘Jaws’ – cables everywhere. And much like the shark, this set bites back.”

The set, which certainly stands on its own as a character in this award-winning phenomenon, has audiences laughing around the world, with the original production still playing the West End, Broadway, a U.K. tour, and the new U.S. tour, which kicked off Sept. 18.

Hook adds, “the beauty of getting to see a show multiple times and with many different casts is to see the huge range of what each performer brings to it. The show is elastic in form and fits a range of performers – yet always seems to be the same. I love it all, still – even after all this time.”

Learn more and get tickets to The Play That Goes Wrong during its one-week engagement, October 9-14.