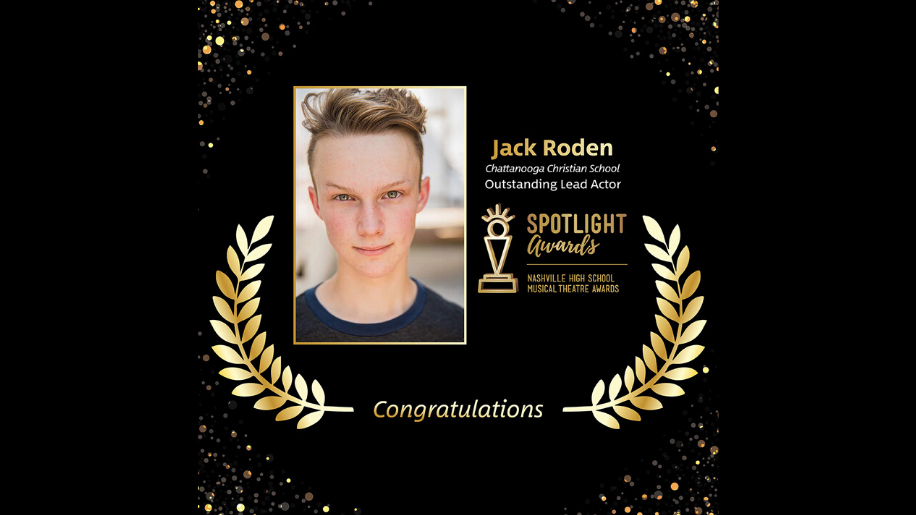 You may have noticed that the 2020 Spotlight Awards looked a little different this year.

Q: What was the first show you ever performed in?

Jack Roden: My first ever show was Aristocats Kids at a summer theatre camp. I was seven years old and was cast as “Hep Cat” and I had 5 lines which all read “Crazy Man Crazy” and since then I was hooked.

Q: When and why did you get involved with theatre?

JR: I was involved in theatre when I was seven years old at a summer camp. Growing up, theatre was still just a hobby for me up until I was a high schooler. The summer before my freshman year was the first time somebody told me I should consider theatre as a career because I’ve been blessed with a gift. This was foreign to me, I had no idea that I would be able to make a living off of this thing I’d fallen in love with, so obviously I was ecstatic. As I grew older I realized how important theatre was to society. Especially with the current state of racial inequality in our country, it is so important to keep telling these stories such as Ragtime, West Side Story, and shows that bring necessary empathy or an escape from the world. It became clear to me that theatre was the most powerful and raw form of art, and as I matured I could not toss my gifts to the side and give up what I found to love most.

Q: Where were you when you found out you were nominated for Outstanding Lead Actor?

JR: When I found out I was awarded lead actor I was on vacation at the beach. I was quarantining, and socially distanced but just in new setting, which was very relaxing. I could not think of a better place to watch the ceremony, it was incredible. Watching that ceremony was such an uplifting event in this troubling time. I found the strong bond that the ceremony showed very comforting. Watching that on the beach was such a blessing.

Q: What made your theatre experience this year different than previous years? Ten years from now, what will you remember about it?

JR: This year obviously looked different than anybody had hoped. Surprisingly this was the closest I’ve ever felt to a cast of a show I was apart of. The uncertainty that came with COVID-19 taught our Newsies cast to cherish every moment. The day that we saw Tennessee was shutting down, was the strangest day of my life. It was a feeling I could not describe. I was filled with sadness but equally with immense gratitude. We stood together and realized how precious building that community had been to each of us, and losing Newsies helped us all realize how much it has meant to us. Although the year took a different turn, in a way it became all the more special to us. Performing is just a bonus, getting to learn a show and build those relationships is so valuable, and having it taken away from us helped us see how much we love it.

JR: Jack Kelly was a “dream role” for me. Newsies is an iconic broadway show, and the second I saw the cast list, I locked in. I wanted to do everything I could to make Jack my own. I wanted to honor the role but do everything I could to not copy Jeremy Jordan, or anybody who played that role in the past. Along with this I did a deep history dive into the late 1800’s and found aspects of Jack that I could relate to in order to find an easier connection. Although I found relatability between us, the most interesting thing about playing Jack was playing somebody that l am so different from. He was a kid my age but had no parents, and was living on the streets. To become Jack was difficult for that treason and I feel like was looked over because of how entertaining and upbeat Newsies is. It was definitely an eye opening experience and the most challenging role I have had to play.

Q: How are you celebrating winning Outstanding Lead Actor?

JR: Winning lead actor still feels surreal. I have been celebrating with my friends and making some amazing connections that will last me a life time. I just got to teach at a socially distanced kids theatre camp, actually the same camp where I did my first show, so it was an awesome way to creep back into working in the arts and come full circle from when I was introduced to theatre. It is very challenging to celebrate during this pandemic, but my community has really shown me their full support through this and I am so grateful.

Q: What’s next for your theatre career?

JR: This next year I am moving to New York City and attending Pace University as an undecided major. I am planning to knock my gen-eds out of the way and audition for musical theatre colleges next year. For the time being, I have made some great connections with professionals in the industry who I am planning on training with to keep in shape for auditions. With all the challenges brought by this pandemic and the performance world being practically shut down, I thought taking this year to become acclimated to the city and make connections that will help me through the years, establishing a steady base, would bring me a long ways. I definitely plan to pursue a professional career in musical theatre and tell stories on whatever level I am called to do. With all the uncertainty, the theatre community has certainly been my backbone through this time. It has been so inspiring to see the theatre world preservers and find ways to keep creating, and I am thrilled to be apart of that in the future.