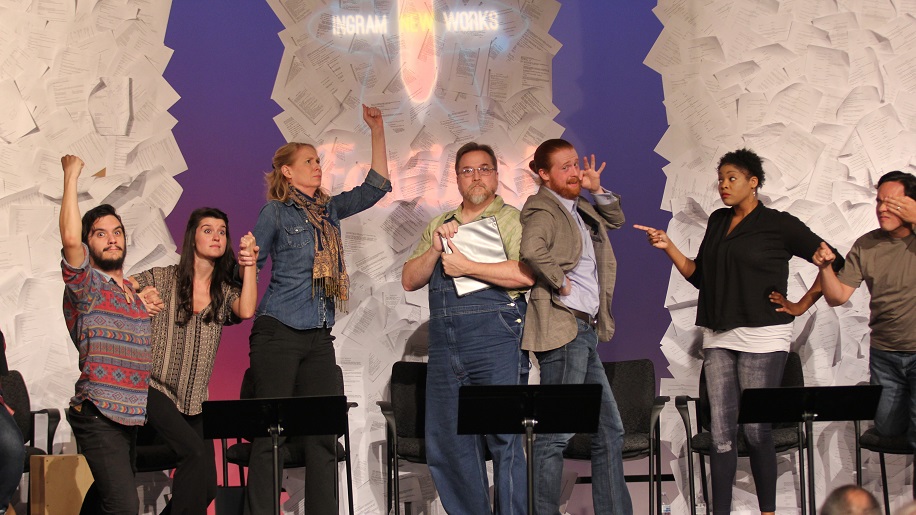 Selected through a highly competitive national search, these five dynamic playwrights represent a snapshot of American theatre’s next wave. The range of the artists’ viewpoints and theatrical styles creates a spectrum of experiences for festival-goers that will give Nashville a taste of the extraordinary contemporary art being made across the country.

“These five brand new plays are each in their own way grappling with the question of who we are, and maybe more importantly, who do we want to be? These are plays about telling our own stories, finding new connections, and finally finding the places we belong,” says Nate Eppler, Director of the Ingram New Works Project.

This year’s plays cover a wide variety of topics and will take audiences to an array of unusual locations. Sarah Ruhl’s play Becky Nurse of Salem takes us to Salem, Massachusetts, where the great-great-great granddaughter of a witch struggles with her family legacy. The Messengers by Lindsay Joelle features a soldier and translator on a dangerous mission in the middle of an intergalactic conflict. The Second Avenue Subway by Dean Poynor is the tale of a father teaching his son about life and faith as they ride the New York City Subway together over many years. Riti Sachdeva takes us to a motel on the edge of a highway on the edge of a city where past and present collide in Welcome to the Taj Palace (Motel). R. Eric Thomas brings together four strangers including a former reality show contestant trying to start over in the comedy Crying on Television.

Playwrights are encouraged to become a part of the Nashville artistic community during their year-long residency. Playwrights are provided with connections to local artists, individually- tailored support from Nashville Repertory Theatre staﬀ, travel, housing, and the kind of radical hospitality you can only get in Nashville.

“Whether it’s music or food or art, Nashville has always been an amazing place for culture and the people who make it. We go out of our way to show our visiting artists how welcoming and inspiring our city can be,” says Director of Community Engagement and Ingram New Works Hospitality Manager Amos Glass.

“Each year we bring extraordinary writers to Nashville, and each year Nashville helps us launch their new works out to the rest of the country. And this year will be no exception,” says Eppler. “You get to see them first, right here in Nashville, before everybody else does. “

Performances of the 2019 Ingram New Works Festival begin on May 8 at 7 p.m. at Nashville Children’s Theatre located at 25 Middleton Street in Nashville and continue nightly through Saturday May 18. Tickets and complete performance schedules are available at NashvilleRep.org/IngramNewWorks.

Sarah Ruhl received her M.F.A. from Brown University where she studied with Paula Vogel. An alum of 13P and of New Dramatists, she won a MacArthur Fellowship in 2006 and most recently, the Steinberg Distinguished Playwright Award. She was the recipient of the PEN Center Award for a mid-career playwright, the Whiting Writers award, the Feminist Press’ Forty under Forty award, and a Lilly Award. She proudly served on the executive council of the Dramatist’s Guild for three years, and she is currently on the faculty at Yale School of Drama. Her book of essays on the theater and motherhood, “100 Essays I Don’t Have Time to Write,” was a Times Notable Book of the Year. She lives in Brooklyn with her family. Sarah’s plays include Stage Kiss; In the Next Room, or the vibrator play (Pulitzer Prize finalist, Tony Award nominee for best new play); The Clean House (Pulitzer Prize finalist, The Susan Smith Blackburn Prize); Passion Play (PEN American Award, The Fourth Freedom Forum Playwriting Award from The Kennedy Center); Dead Man’s Cell Phone (Helen Hayes Award); Melancholy Play (a musical with Todd Almond); Eurydice; Orlando; Demeter in the City (NAACP nomination); Late: a cowboy song; Three Sisters; Dear Elizabeth; The Oldest Boy; and most recently, For Peter Pan on her 70th Birthday; and How To Transcend a Happy Marriage.

As a theatre maker and cultural worker, Riti Sachdeva has been creating art in some shape, pattern, or rhythm for twenty five years. Incorporating text, installation, and dance into her writing and performance, she straddles the practices and conventions of traditional U.S. theater, performance art, and international perspectives and approaches to theater. Riti has been a playwriting fellow with The Public Theater’s EWG, WP Theater Lab, and the Dramatists Guild. Her plays have been developed by The Civilians, PlayWrights Center, National New Play Network, U of Hawai’i, Working Theater, Centerstage Baltimore, and Lincoln Center Director’s Lab. She is recipient of the Kennedy Center’s Quest for Peace award for her play Parts of Parts & Stitches and a TCG travel grant to begin adapting her play Suicide Seed to the kathakali dance theatre form. Her play The Rug Dealer made the 2016 Kilroys List and was a finalist for the BAPF. Acting highlights include work with National Hispanic Cultural Center, PopUp Theatrics, Honest Accomplice, HBO, Disney, lots of cool indie films, an Outstanding One Act award from Planet Connections Festival for her solo show Scene/Unseen. Riti recently workshopped her new solo show, Behind Every Favorite Song is an Untold Woman, in NYC and Belize.

Eric Thomas is a playwright and the long-running host of The Moth in Philadelphia and D.C. He is also a Senior Staﬀ Writer for Elle.com where he writes “Eric Reads the News,” a daily current events and culture humor column. He won the 2016 Barrymore Award for Best New Play for Time is on Our Side and the 2018 Dramatists Guild Lanford Wilson Award. He is the recipient of a 2017/2018 National New Play Network Commission and is at work on his debut memoir-in-essays, entitled Here For It, which will be published by Ballantine Books. Recent productions include Mrs Harrison (Azuka Theater, Barrymore nomination: Best New Play), MIRIAM1234 (City Theater Miami) and Time is on Our Side (About Face Theater & Simpatico Theater, finalist: Steinberg/ATCA New Play Award). He has been commissioned by the Arden Theater Company, Simpatico Theater, and Act II Playhouse.

ABOUT THE INGRAM NEW WORKS PROJECT

The Ingram New Works Project is a nationally recognized new play development program designed to empower new voices in the American theatre with transformative support and expand the creative capacity of Nashville by connecting artists and audiences across extraordinary new works. The project was created with the support of co-founder Martha R. Ingram to provide an opportunity for theatre artists to develop new theatre works while in residency at Nashville Rep. Since 2009, the Ingram New Works Project has supported the development of over sixty new plays for the stage that have gone on to development, awards, and production across the United States. The continuing journey of each of those plays and playwrights is made possible through the early support of Nashville audiences and artists and the Ingram New Works Project.

Since 1985, Nashville Repertory Theatre has been a critically acclaimed regional theater, creating the highest quality professional productions and serving as a cultural, educational, and economic resource in Nashville and Middle Tennessee communities. Nashville Rep produces work that is designed, built, and rehearsed in Nashville by highly skilled actors, designers, directors, and technicians. A non-profit theatre, Nashville Rep is committed to bringing classic and contemporary theatre to Nashville that inspires empathy and prods intellectual and emotional engagement in audiences.