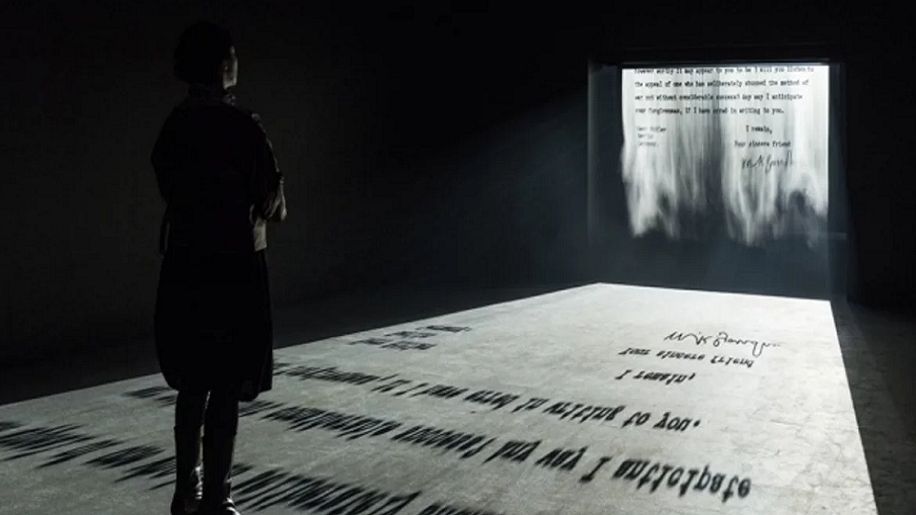 Exploring a 1939 typewritten letter from Mahatma Gandhi to Adolf Hitler, sent just a few weeks before the outbreak of World War II.

The Frist Art Museum presents Return to Sender, an exhibition of immersive installations created by the celebrated Indian artist Jitish Kallat. The dramatic works, which engage both mind and body, are inspired by historic messages that reveal the best and worst of humanity. The exhibition will be on view in the Frist’s Upper-Level Galleries from March 13 – June 28.

A timely message from the past. (Photo by Joseph Hu)

“Kallat’s explorations of the epistolary mode are well suited to our museum as our building is the former main post office of Nashville,” says Frist Art Museum Curator Trinita Kennedy. “From here countless letters have been sent and received.”

Covering Letter is a haunting interactive digital projection of a 1939 typewritten letter from Mahatma Gandhi to Adolf Hitler, sent just a few weeks before the outbreak of World War II. The letter is seen on a curtain of traversable dry-fog in the dark.

“Gandhi makes a radical appeal for peace, anticipating the brutal bloodshed that the impending war would unleash,” says Kennedy.

In the spirit of his doctrine of universal friendship, Gandhi uses the salutation “Dear Friend…” and urges Hitler to resist “reducing humanity to a savage state.” Visitors walk through the screen of descending mist, simultaneously inhabiting and dissipating the moving text. Kallat describes the letter as “a space for self-reflection; a petition from one of the greatest proponents of peace to one of the most violent individuals who ever lived. It can also be read as an open letter from the past destined to carry its message into our turbulent present, well beyond its delivery date and intended recipient.”

Kennedy hopes the work will have special resonance in Nashville.

“This exhibition marks the first time that Covering Letter has been exhibited in the American South, a place where Gandhi’s ideas about of nonviolent resistance were a vital part of the Civil Rights Movement.”

Covering Letter (terranum nuncius) commemorates and reinvokes the Golden Record, sent as time capsules aboard the Voyager 1 and 2 space probes launched by NASA in 1977. For those expeditions, select sounds, music, and images were placed on two gold-plated phonographic records with the intent to represent life on Earth to any extraterrestrial discoverer. Currently located over 13 billion miles away from planet Earth, they are expected to continue their cosmic journey well beyond the probable extinction of our species and our planet.

Upon entering this installation, visitors will hear a chorus of humanity greeting the universe in 55 languages. There is a projection of a map indicating Earth’s position in our solar system and a large round table with over a hundred images printed on parallax lenses, which are illuminated by lights that pulsate at the rate of human breath. The images, drawn from the Golden Record, include scientific and cosmological diagrams, representations of our genetic makeup and anatomy, as well as other life forms, and architecture, often annotated with measurements. “This is an epic presentation of Earth to an unknown other,” says Kennedy. At a time when we find ourselves in a deeply divided world, Kallat foregrounds these sounds and images for a collective meditation on ourselves as united residents of a single planet.

In Covering Letter (terranum nuncius) there is also a bench shaped like the hands of the Doomsday Clock. This symbolic clock, updated annually by the Bulletin of Atomic Scientists, represents a hypothetical human-made global catastrophe as midnight, and the proximity of the world to apocalypse as a number of minutes or seconds to twelve. “The Golden Record’s presentation of unity and harmony among earthlings is belied by the actual state of the world,” says Kennedy. “The reality is that our planet hangs in the balance through circumstances of our own making, and the clock bench is an ominous metaphor that differs from the euphoria and optimism associated with the midnight on occasions such as New Year’s Eve.” Woven into the hour are humankind’s worst fears and greatest hopes.

This exhibition marks the first time that Kallat’s two Covering Letter installations will be shown together. Exhibited in darkened galleries and open ended in meaning, they are intended to provoke contemplations of our world and the universe.

Born in India in 1974, Kallat has exhibited his work widely across the world in contexts such as galleries, museums, and biennials. In 2017, the National Gallery of Modern Art (New Delhi) presented a midcareer retrospective of his work titled Here After Here, 1992–2017, curated by Catherine David. Kallat has had solo exhibitions at the Art Gallery of New South Wales (Sydney), the Art Institute of Chicago, the Bhau Daji Lad Museum (Mumbai), the Philadelphia Museum of Art, and other museums.

He has exhibited widely, at Martin-Gropius-Bau (Berlin), the Mori Art Museum (Tokyo), Serpentine Galleries (London), Tate Modern (London), the Valencia Institute of Modern Art (Spain), and other institutions. His work has been part of the Asian Art Biennial, the Asia Pacific Triennial, the Curitiba Biennial, the Gwangju Biennale, the Havana Biennial, the Kyiv Biennial, and the Venice Biennale, among others. Kallat also served as the curator and artistic director of the Kochi-Muziris Biennale’s second edition, in 2014.

Mumbai-based artist Jitish Kallat will share a cross section of his work, exploring the many processes, themes, and ideas that recur throughout his wide-ranging artistic practice. Kallat’s works often engage with the ideas of time, transience, sustenance, the ecological, and the cosmological. These explorations take the form of investigative animation videos, photo-works, paintings, sculptures, and elemental drawings that participate in atmospheric phenomena such as wind and rain. In works such as Covering Letter (2012), which will be on view at the Frist, a historic moment is invoked, prompting a contemplation on our present by mediating it through the past. This artist-talk may unfold into a dialogue, as a Q&A session will follow Kallat’s lecture.

Outshone only by the sun and moon in our sky, Venus owes its brilliance to its proximity to Earth and to its highly reflective clouds, which unceasingly and completely obscure its surface. As Venus orbits the sun within our orbit, one may observe it going through a complete set of phases, much as the moon does. Since late 2019, Venus has appeared in the western sky after sunset as the “evening star.” This April and May, Venus will sport a gorgeous crescent phase that you can easily see with a small telescope or pair of binoculars.

Dyer Observatory is a Vanderbilt University facility dedicated to inspiring students and the public in science through the wonders of astronomy and space exploration. Surrounded by scenic Radnor Lake State Park and listed on the National Register of Historic Places, Dyer’s telescopes have pointed toward the sky since 1953.