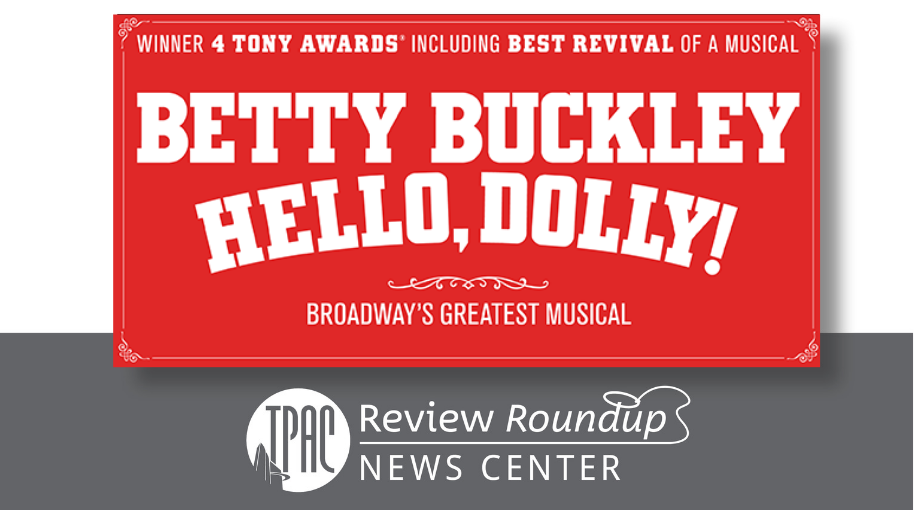 The new stunning production of Hello, Dolly!, winner of four Tony Awards including Best Musical Revival, plays TPAC’s Jackson Hall through Sunday, May 5. Broadway legend Betty Buckley leads the show, paying tribute to the original work of director/choreographer Gower Champion – hailed both then and now as one of the greatest stagings in musical theatre history. Audiences and critics across Middle Tennessee are falling in love with Hello, Dolly! all over again. Read what the reviewers had to say about the show:

You’ll be riveted to your seat in Andrew Jackson Hall, eager to absorb the experience, ensuring you hear every note sung, respond to every word uttered and watching a company of impressively talented individuals come together to create something that will live on in your memory for the rest of your life. Hello, Dolly! is the apotheosis of musical comedy, as we have come to love and revere it. We’re just lucky to see it happen in front of our very eyes.

The national tour brings us Broadway legend Betty Buckley. And let me tell you, this “Dolly” is looking swell. From the moment Buckley arrives on stage, she takes the audience well in hand – sashaying her way through the evening with equal parts sass and savvy. But she also brings surprising depth to a role often played merely for laughs. Monologues addressing her dear departed husband and Act I’s big closing number “Before the Parade Passes By” are particularly potent, infused with great truth and vulnerability.

A Broadway legend leads an impeccable cast in one of the best musical productions your family will ever experience! The main supporting characters are perfectly cast. Nic Rouleau is stunning as Cornelius Hackl. His terrific tenor will make you swoon, and he so wonderfully exudes the optimism his character commands. Sean Burns’ portrayal of Barnaby Tucker is the best you’ll ever see. His comedic ability is magnificent, and his nimble dance moves are monumental. Kristen Hahn’s Minnie Fay provides lots of over-the-top laughs. Hometown lady Analisa Leaming (she hails from Murfreesboro and was in the original 2017 revival cast with Midler as an ensemble member/Irene understudy) so beautifully portrays Irene Molloy. Leaming sings like an angel and has a commanding stage presence. She infuses a vivacious sense of adventure in Irene and provides a remarkable performance of “Ribbons Down My Back.” This particular foursome — Rouleau, Burns, Leaming and Hahn — provide the show’s secondary love stories, and they do so with much aplomb.

There is an unutterable joy that comes from a great Broadway musical done damn well. It’s with great satisfaction that I can report the national tour of Jerry Herman’s classic 1964 musical Hello, Dolly! is so ebullient and exceptional that the show’s passerelle runway can barely contain it all.

From the moment TPAC’s audience saw Betty Buckley on opening night, they were mesmerized. Cheers rang throughout Andrew Jackson Hall from the moment she opened her mouth to her last bow at curtain call. Nashville is obviously thrilled to have a Broadway living legend grace the TPAC stage. Seeing Buckley as the lead in this revival is a must for any Nashville-area Broadway fan.

I could go on an on about Buckley’s performance and yes, she could absolutely simply stand on stage and sing each of the songs from Hello, Dolly! in concert and trill audiences, but alas there’s more to Hello, Dolly! than Dolly Levi. For starters, Lewis J. Stadlen as Horace Vandergelder perfectly embraces the time period as the blustering, and frequently flustered half-millionaire. Part Al Lewis, part Jimmy Durante, part Burgess Meredith, Stadlen is indeed the perfect match and compliment to Buckley’s Levi.

Make sure to catch ‘Hello, Dolly!’ here in Nashville before the parade passes by! Tickets are on sale now.