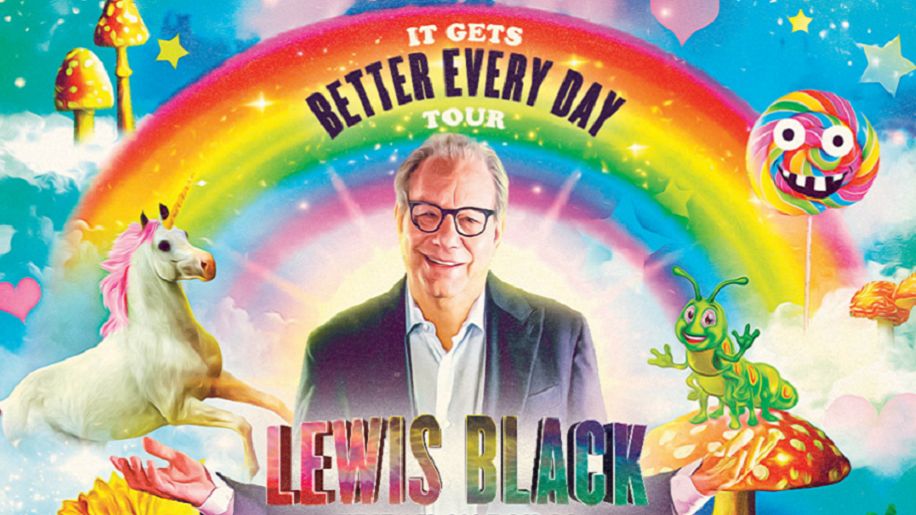 These are the words used to describe the comedic musings of Lewis Black, who brings his irate ranting to TPAC’s Polk Theater April 17-18.

Anyone who’s seen his appearances on The Daily Show and stand-up sets on Comedy Central knows of his trademark style of energetic yelling and animated finger-pointing to skewer anything and anyone that gets under his skin.

The Grammy Award-winning comedian will make a stop on his It Gets Better Every Day tour as part of the Nashville Comedy Festival — which last year featured the likes of Jay Leno, Jeff Foxworthy and Bob Newhart.

“When I say, ‘It gets better every day,’ you might be wondering, is he being facetious? Come to the show and find out,” Black says. “Or stay home and wallow in your sadness.”

Black is one of the most prolific and popular performers working today.

As a passionate performer who is a more pissed-off optimist than a mean-spirited curmudgeon, his live performances provide a cathartic release of anger and disillusionment for his audience. His talent lies in his ability to make people laugh at the absurdities of life, with topics that include current events, social media, politics and anything else that exposes the hypocrisy and madness he sees in the world.

He’s also clearly not affected by time or age. At 71-years-old, he performs more than 200 nights annually to sold-out audiences throughout Europe, New Zealand, Canada and the United States.

Black is the only correspondent on The Daily Show to work for all three hosts — Craig Kilborn, Jon Stewart and now Trevor Noah — with his popular “Back in Black” segments. He was also the voice of anger in the Pixar film Inside Out and hosted the Comedy Central show Lewis Black’s Root of All Evil.

As a stand-up comedian, actor and author, Black has appeared on Larry King Live, Piers Morgan Tonight, Late Night with Jimmy Fallon, The Late Show with David Letterman, Late Night with Conan O’ Brian and The Late Late Show with Craig Ferguson. Black has also had numerous appearances on CNN and MSNBC and has occasionally done the weather with Al Roker.

Since 2014, Black has done over 400 live streamed shows called “The Rant is Due” at the end of each of his stand-up performances. Adding his own unique style, Lewis delivers audience written rants which have been submitted by the fans at his show and throughout the world. With so much to get off their chests, people use Lewis’ platform to rant about what’s on their minds.

This is yet another reason Lewis represents a rare type of comic who can cause an audience to laugh themselves into incontinence while making compelling points about the absurdity of our world.