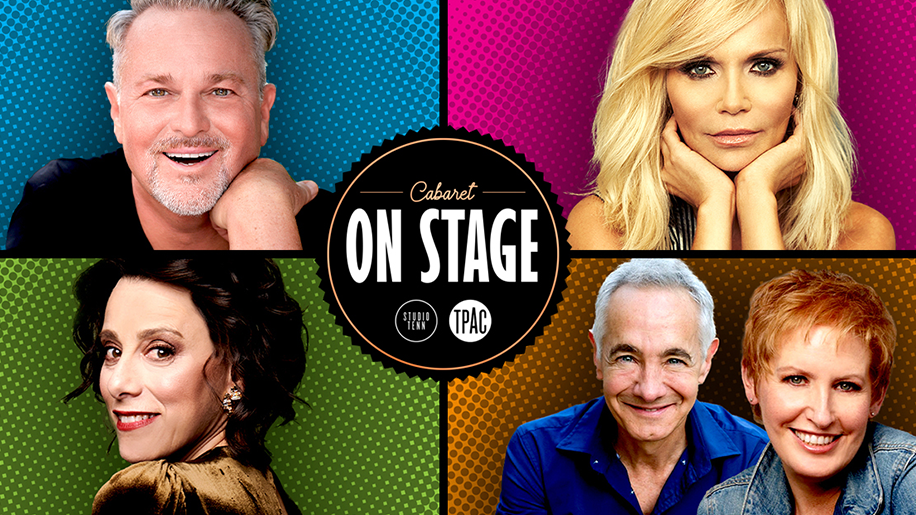 Get exclusive first access to this limited capacity series when you purchase all four performances now. VIP tickets include premium seating to the series plus access to a post-show reception with Kristin Chenoweth after her performance on September 10, 2022.

October 15, 2022 – An Intimate Evening with JUDY KUHN with JOHN McDANIEL

SAM HARRIS’ diversified career has run the gamut from singer and songwriter to actor on Broadway, film, and television, to writer, director, producer, and author. After pulling a weekly audience of more than 25 million viewers on “Star Search” in its premier season, Harris and his powerhouse pop, gospel, and theatre influenced vocals have never looked back. Now, Harris is a multi-platinum recording artist with nine studio albums to his credit. Rolling Stone listed him as one of the “Top Greatest 100 Vocalists of all Time.” On Broadway, Harris received a Tony, Outer Critic’s Circle, and Drama Desk nominations for his work in Cy Coleman’s “The Life,” a Drama League Award, and Drama Desk nomination for his role in Tommy Tune’s “Grease,” and appeared in Mel Brooks’ “The Producers” as well as “Jesus Christ Superstar,” “Cabaret,” “Joseph and the Amazing Technicolor Dreamcoat,” “Hair,” “Pippin,” and “The Jazz Singer.” Harris has toured in concert and has played to sold-out audiences everywhere from Carnegie Hall to the Boston Pops. He performed with Cyndi Lauper on her True Colors tour. He and Liza Minnelli performed their duo-show “Schmoolie and Minnooli” in a limited sold-out run in New York. Behind the scenes, Harris co-wrote the TBS sit-com, “Down to Earth,” co-produced and directed the television special “Love Letter to New York,” supervised and directed segments of Michael Jackson’s 30th Year Anniversary at Madison Square Garden, and co-wrote Tony Award winning “Liza’s at the Palace” for Liza Minnelli. He created and directed the concert event “New York’s Finest – Broadway’s Leading Men” and has directed numerous multi-star events featuring Broadway and recording luminaries.

LIZ CALLAWAY is a Tony Award nominee and Emmy Award-winning actor, singer, and recording artist. She made her Broadway debut in Stephen Sondheim’s “Merrily We Roll Along,” receiving a Tony Award nomination for her performance in “Baby,” and for five years, won acclaim as Grizabella in “Cats.” Callaway has starred in the original casts of “Miss Saigon,” “The Three Musketeers,” and “The Look of Love.” Off-Broadway, she received a Drama Desk nomination for her performance in “The Spitfire Grill” (Playwrights Horizons), and appeared in “Brownstone” (Roundabout), “No Way to Treat a Lady,” “Marry Me a Little,” and “Godspell.” Other appearances include the legendary “Follies in Concert” at Lincoln Center, “A Stephen Sondheim Evening,” “Fiorello!” (Encores!), and “Hair” in Concert. Callaway has established a career as a concert and recording artist. The award-winning “Sibling Revelry” (created with her sister Ann Hampton Callaway) was presented at the Donmar Warehouse in London. “Boom!,” a celebration of the music of the 60’s and 70’s also created with her sister, was recorded live at Birdland, and is currently touring performing arts centers around the country. Callaway sang the Academy Award-nominated song “Journey to the Past” in the animated feature “Anastasia” and is the singing voice of Princess Jasmine in Disney’s “Aladdin and the King of Thieves” and “The Return of Jafar.” Other film work includes the singing voice of the title character in “The Swan Princess,” “The Lion King 2: Simba’s Pride,” “Beauty and the Beast,” “The Brave Little Toaster Goes to Mars” and “The Rewrite” with Hugh Grant. She received an Emmy Award for hosting “Ready to Go,” a daily, live children’s program on CBS in Boston. http://www.lizcallaway.com @LizGoesOn (Instagram/Twitter)

JASON GRAAE has been featured on Broadway in “A Grand Night For Singing,” “Falsettos,” “Stardust,” “Snoopy!,” and “Do Black Patent Leather Shoes Really Reflect Up?” Off- Broadway shows include “Hello Muddah, Hello Fadduh” (Drama Desk Award Nomination for Best Actor); the original cast of “Forever Plaid,” “Olympus on My Mind,” “Spamilton,” and more. Graae recently traveled across the US as the Wizard of Oz in the National Tour of “Wicked.” Winner of the Los Angeles Drama Critics Circle Award for Outstanding Contribution to Musical Theatre, he originated the role of Houdini in the US premiere of “Ragtime” at LA’s Shubert Theatre, was featured in “Forbidden Hollywood” and “Forbidden Broadway Y2KLA!” (Ovation Award), and at the Hollywood Bowl playing Benny in “Guys and Dolls” and Marcellus in “The Music Man,” a role he performed with Patrick Cassidy and Shirley Jones in the 50th Anniversary concert production. TV shows include “Friends,” “Frasier,” “Six Feet Under,” “Rude Awakening,” “Sabrina the Teenage Witch,” “Living Single,” and “Evening at Pops.” For years, Graae was the voice of Lucky the Leprechaun for Lucky Charms Cereal, a balanced part of your complete breakfast. Films include Disney’s “Home on the Range,” “Geppetto, On Edge,” and “Sunshine Barry and the Disco Worms.” For his solo cabaret show and his duo show with Faith Prince, he has won four Bistro Awards and two New York Nightlife Awards. Graae has recorded more than 70 original cast, studio, and solo albums.

KRISTIN CHENOWETH is an Emmy and Tony Award winning actor and singer whose career spans film, television, voiceover, and stage. In 2015, Chenoweth received a coveted star on The Hollywood Walk of Fame. In 2009, she received an Emmy Award for Best Supporting Actress in a Comedy Series for her role in “Pushing Daisies.” In 1999, she won a Tony Award for “You’re A Good Man, Charlie Brown,” and she was nominated for her original role of Glinda the Good Witch in “Wicked” in 2004. Chenoweth recently co-starred in Apple TV+’s acclaimed musical-comedy series “Schmigadoon!” alongside Cecily Strong, Keegan-Michael Key, and Ariana DeBose. For her role as Mildred Layton, Chenoweth received a Critics’ Choice Award nomination for Best Supporting Actress in a Comedy Series. Chenoweth was nominated for two Emmy Awards and for a People’s Choice Award for her role on “Glee.” In 2009, she wrote an upliftingly candid, comedic chronicle of her life so far, “A Little Bit Wicked,” which debuted on The New York Times Hardcover Non-Fiction Best Seller List. She just released her first picture book, “What Will I Do with My Love Today?,” a sweet tale about a young girl named Kristi Dawn who shares her love through acts of generosity around New York City. In 2019, Chenoweth released her album “For The Girls,” a heartfelt tribute to the great female singers throughout history, particularly Chenoweth’s heroes and friends. Chenoweth recently starred in the second season of NBC’s hit comedy series “Trial & Error,” receiving critical acclaim for her performance as Heiress Lavinia Peck-Foster. She was seen in the Starz original series “American Gods,” where she reunited with executive producer Bryan Fuller in the role of Easter. Notable television roles include appearances in “The West Wing,” Disney’s “Descendants,” and “The Muppets.” In film, Chenoweth voiced the role of “Gabi” in the hit animated film “Rio 2” and “Fifi,” Snoopy’s beloved French poodle in “The Peanuts Movie.” She starred in the indie teen drama entitled ‘Hard Sell” and additional film credits include “The Boy Next Door,” “Deck the Halls,” “Twelve Men of Christmas,” “Four Christmases,” “RV, Bewitched,” “The Pink Panther,” “Hit & Run” and “Family Weekend.” She also starred in NBC’s “Hairspray Live!” as Velma Von Tussle in December 2016. Chenoweth voiced the role of Princess Skystar in Lionsgate/Hasbro’s “My Little Pony: The Movie,” and can also be heard in the Sony Pictures animated film “The Star.” Chenoweth is a passionate supporter of charities which dedicate their time and efforts to helping those in need. She formed a charity partnership with the Broken Arrow Performing Arts Center (BAPAC) Foundation in her home state of Oklahoma. Partnering with the BAPAC in a labor of love, she launched an annual Broadway Bootcamp in 2015, providing young Broadway hopefuls with the opportunity to take classes, hold performances, and learn from top mentors in the entertainment industry including herself. Chenoweth is a graduate of Oklahoma City University with a master’s degree in Opera Performance.

JOHN McDANIEL is a Grammy and Emmy Award winning music director, composer, director, arranger, orchestrator, and producer who is also an artistic director at the Tony Award winning Eugene O’Neill Theater Center. Recently, McDaniel participated in a live Playbill concert event in Times Square welcoming back Broadway, featuring Brian Stokes Mitchell, Jessica Vosk, and Chuck Schumer. McDaniel produced and directed a virtual concert of “Sticks & Stones,” for which he is also the composer, starring Audra McDonald and Javier Muñoz. He is also a camp director of Kristin Chenoweth’s Broadway Boot Camp. McDaniel directed “Into The Woods & Hair in Concert” at the historic Patchogue Theater, “Sondheim Originals” at 54 Below, and “Piano Men” at Birdland. His Broadway music credits include “Bonnie and Clyde” (Drama Desk Nomination, Best Orchestrations), “Catch Me If You Can,” “Brooklyn” (Producer and Orchestrator), “Annie Get Your Gun” (Grammy Award), “Taboo,” “Chicago,” “Grease,” “Patti LuPone on Broadway,” and “Company” – the Original Cast in Concert at Lincoln Center. On Television: “The Rosie O’Donnell Show” (two Emmy Awards and eight nominations). McDaniel has collaborated with Cab Calloway, Shirley MacLaine, George Burns, Joel Grey, Carol Burnett, Betty Buckley, and Bette Midler, and has guest conducted at 15 Symphony Orchestras across America, including five concerts with his hometown St. Louis Symphony. McDaniel received a BFA in Drama from Carnegie Mellon University.

Studio Tenn is a professional regional theatre company based in Franklin, Tennessee. Its programming centers around innovative, custom-designed presentations of classic plays and musicals as well as an original “Legacy” series of theatrical concerts celebrating the work of legendary performers and musicians. For more information about its 2022-23 season, visit: www.studiotenn.com.

We have updated our Patron Entry Policy and no longer require proof of a negative COVID-19 test or vaccination. Masks are required for Broadway at TPAC performances. For event-specific policies, visit TPAC.ORG/ShowUpdates. For complete entry policy and health protocols, visit TPAC.ORG/PatronHealth.