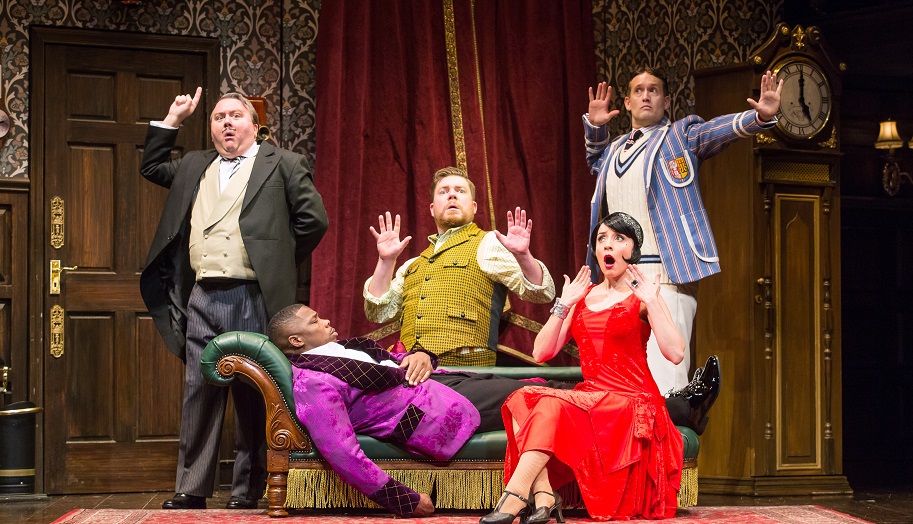 If ever there was truth in advertising it’s the hit British comedy The Play That Goes Wrong, says producer Kevin McCollum.  “I’ve got to tell you, it’s been a pleasure having a show that I can market and it is exactly what it says it is!”  McCollum (Rent, Avenue Q) has teamed up with famed writer/producer J.J. Abrams (Star Wars, Star Trek, Lost) to present this international sensation about a hilariously disastrous production of a murder mystery here in the United States.

There are ten actors onstage, but McCollum says the eleventh character is the set. “I think one of the reasons it won the Tony is because it is a set with a personality,” he says. “It actually is the antagonist of the show.”  The characters in the play struggle with tiny things at first – a stuck door, a mantlepiece which keeps falling down, pictures and other objects which keep falling off the walls.  But as the play goes on, the set malfunctions become more and more sidesplittingly spectacular.

U.K.-based set designer Nigel Hook has worked on several murder mysteries, so his set, which is supposed to be of a collegiate production of an Agatha Christie-type play, features all the clichés of the genre – wood paneling, tacky wallpaper, a fireplace and mantle, pictures and shields on the wall, even a second floor study. But Hook has attended more than his share of theatrical disasters over the years, which he’s also incorporated into his set design. “You just pull references from what you’ve seen and what you wish would happen sometimes,” he says. Hook recalls attending an “incredibly dull Charley’s Aunt,” which was unwittingly improved when, “on the first night literally the furniture started falling apart.”  So watch for the same kind of mayhem to ensue in The Play That Goes Wrong when the characters onstage least expect it.

There’s quite an art to making things appear to be broken, says Hook. “Basically, you don’t make it so it will break, you make it broken,” he explains. “And you make it very well, so it will go back together again very quickly.”  Without trying to give away too many trade secrets, the designer says much of what “goes wrong” involves magnets, hooks, levers and “the forces of gravity.”

Part of the fun of the set is that, at times, what happens onstage looks genuinely perilous.  “We’re really, really precise with all the slapstick,” says co-author Henry Shields. “We want it to look dangerous, but be absolutely safe for the actors doing it. It’s all making sure all the precautions are in place and making sure that things are cued at the right time.”  To achieve that, the actors rehearsed on the set for the original production, says Hook.  “we had a period of time where we could pidge and fiddle with things, and it went up in the rehearsal rooms.” And that has been the protocol for every production since. So “that when we do hand it over to people, you know, we all sleep easily,” says co-author Jonathan Sayer.

The set itself gets quite a workout during every show.  Hook says after each performance there’s “about half an hour’s work, sort of settling things; putting flaps back up, cleaning…the rug gets very wet, so that has to be put into a position where it can dry out, without causing any problems.” Before each performance, there’s at least another hour of getting the set and props ready to go: “they do lists and they double check and they check themselves and somebody else does a shout round of what has to be where.”

When The Play That Goes Wrong opened on Broadway, Hook’s set design was singled out in most of the reviews.  Jesse Green, in Vulture, wrote: “Nigel Hook’s booby-trapped set should get either a Tony Award or a cease-and-desist order from OSHA.”  And when the Tony Awards were handed out a couple of months later, Hook received the Tony for best scenic design of a play.  “It was just extraordinary,” Hook remembers of the attending the ceremony in the 6000 seat Radio City Music Hall.  “I made the foolish mistake of putting my pathetic little speech in my back pocket. I never use a back pocket! And then couldn’t find it, once I got up there. So, I winged it. Fortunately, I think everybody thought I was making a big joke! But I was terrified.” A little bit like the seemingly hapless actors who get conked on the head and buffeted about on his brilliant set.