The hicks, skids, and jocks of ‘Letterkenny’ bring their hit Canadian sketch comedy to TPAC Mar. 16 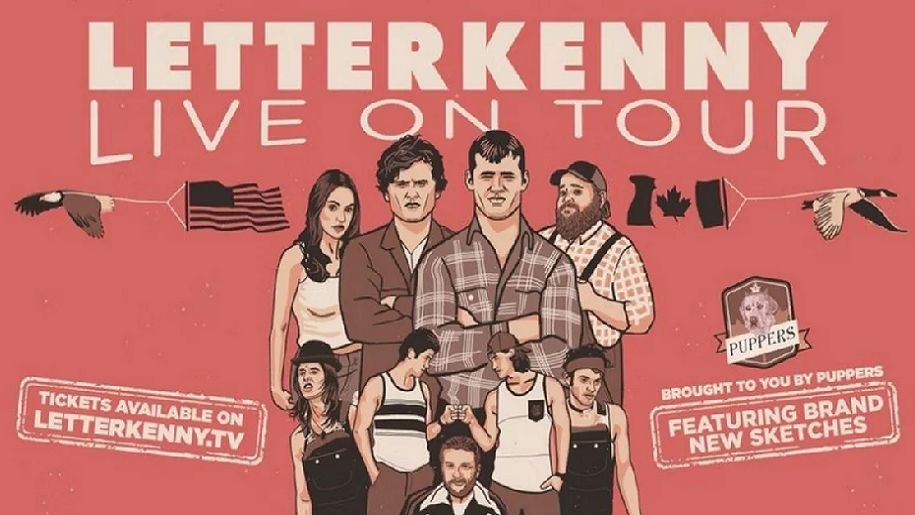 Pitter patter! Let’s get at ‘er!

Nobody’s sure if America is ready for Letterkenny on tour.

The raucous exploits of these eccentric Canadian hillbillies and their produce stand are now chronicled in a live, 90-minute comedy experience — coming to TPAC Mar. 16 — featuring nine of the beloved cast members along with never-before-seen sketches.

Let’s back up. What is Letterkenny, anyways?

Well, there is a small town of 5000 people in midwestern Ontario called Letterkenny, but we’re talking about the Canadian television sensation that started as a hashtag on Twitter and has grown into an incredibly relatable comedic gem about small town problems. And boy, do they have some unique problems…

Now you’re thinking, “why haven’t I heard of this?”

Well, that’s because you probably don’t have Hulu. Last year, the series’ back catalog, originally created with Canadian streaming service Crave, was picked up by Hulu, making its previous six seasons available to American audiences. Characters on the show rarely talk about the U.S., save for wondering why malt vinegar isn’t a staple condiment in American restaurants or rolling their eyes at Canadians who move to El-Ayyyy (LA).

Created by Jared Keeso and Jacob Tierney, Letterkenny has gone from hashtag, to web series, to television show (premiering its seventh season earlier this year) in record time.

Part of what makes Letterkenny special isn’t just that it’s based on the small-town life of Keeso (who also stars as Wayne), but how it manages to combine quirky dialogue, regional slang, rapid-fire joke delivery and near-constant cussing with a surprising amount of humanity.

The cocktail of comedic characters doesn’t hurt either. As the Crave Original comedy series so eloquently states at the beginning of its pilot episode, “Letterkenny consists of hicks, skids, hockey players and Christians.”

The main characters are Wayne, his sister, Katy, and buddies Daryl and Squirrley Dan. On the periphery are other characters such as the hockey jock bros Jonesy and Reilly, a crew of skids who dance (among other things) in the Dollar Store parking lot and plenty of eclectic townsfolk.

So, do you think Nashville is ready for rapid-fire dialogue mixed with country-fried, ‘Seinfeldian’ conversations about nothing?