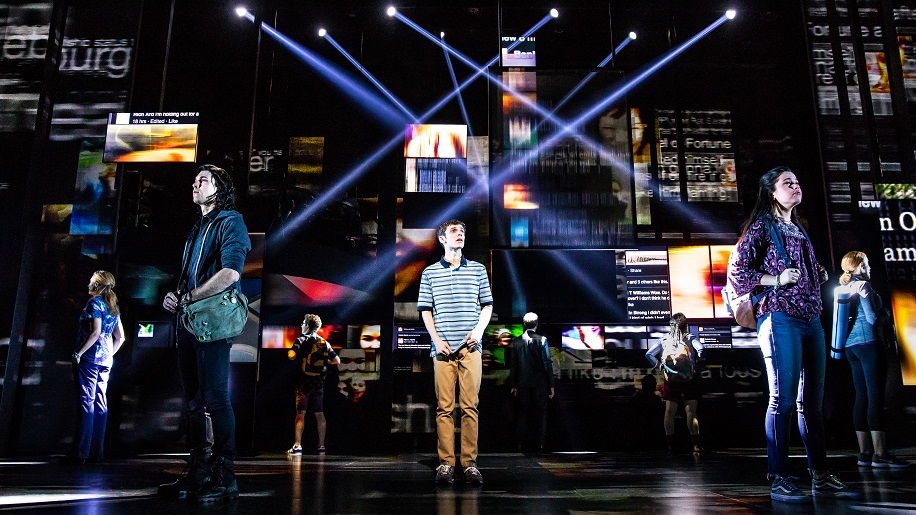 Ben Levi Ross and the company of the First North American Tour of 'Dear Evan Hansen.' Photo by Matthew Murphy.

“One of the most remarkable shows in musical theatre history.” – The Washington Post

Declared “One of the most remarkable shows in musical theater history” by the Peter Marks of the Washington Post, Dear Evan Hansen opened at the Music Box Theatre to rave reviews on Dec. 4, 2016.

There, it has broken all box office records and struck a chord with audiences and critics alike, including New York Times critic Jesse Green, who, in his May 2019 re-review of the show, declared it “more and more ingenious with each viewing. It is more hopeful than ever.”

The Broadway production recently celebrated its two-year anniversary with a special donation to the Smithsonian, where the show’s iconic blue polo and arm cast will now be part of the permanent collection of the National Museum of American History in Washington, DC. A record-breaking US national tour launched in October 2018 and is currently playing across North America, and a limited engagement recently opened at Toronto’s Royal Alexandra Theatre, where it runs through July 21, 2019.  The show’s second international production will open in the West End on Nov. 19, 2019 at London’s Noel Coward Theatre.

The Grammy Award-winning Original Broadway Cast Recording of Dear Evan Hansen produced by Atlantic Records, was released in February 2017, making an extraordinary debut on the Billboard 200 and entering the chart at #8 – the highest charting debut position for an original cast album since 1961 – and went on to win the 2018 Grammy Award for Best Musical Theatre Album. A deluxe version of the cast recording, including six bonus tracks and a pop cover from Katy Perry of “Waving through a Window” is now available digitally.

A special edition coffee table book authored by Levenson, Pasek and Paul, “Dear Evan Hansen: through the window” (Grand Central Publishing / Melcher), is now available, offering an in-depth, all-access look at the musical, including never-before-seen production photos and cast portraits, behind-the-scenes stories, and a fully annotated script by the authors.

In addition to winning six 2017 Tony awards and a 2018 Grammy Award, Dear Evan Hansen has won numerous other awards, including the 2017 Drama League Award for Outstanding Musical Production and for the off-Broadway production, two Obie Awards, a Drama Desk Award, and two Outer Critics Circle Awards and two Helen Hayes Awards. Dear Evan Hansen is also the winner of the Broadway.com Audience Choice Awards three years running, and was just proclaimed the Best Long-Running Show and the Best Touring Production in the 2019 Broadway.com Audience Choice Awards.

For over a year, Dear Evan Hansen has had the support of passionate fans on Broadway. We’re thrilled to make new connections in dozens of cities as we tour across North America. We want the people of Nashville to be a part of our exciting new journey. Dear Evan Hansen fans are invited to follow this link and provide a photo so that they can be included in the artwork mosaic for the TPAC performance.

Dear Evan Hansen is the first production featured in the 2019-20 HCA Healthcare/ TriStar Health Broadway at TPAC season. Performance schedule, prices and cast are subject to change without notice. The Broadway season is supported by the HCA Foundation on behalf of HCA and the TriStar Family of Hospitals, and NewsChannel 5 is the media sponsor for the season. Institutional sponsors for TPAC include Nissan North America and Coca-Cola. TPAC is funded in part by support from the Tennessee Arts Commission and the Metropolitan Nashville Arts Commission.

TPAC is an accessible facility that provides a variety of services including wheelchair accommodations, accessible parking, and assistive listening devices. Open captioning, American Sign Language, audio description, and large print and Braille programs are offered at the Sunday matinee performance of each Broadway series and Broadway special engagement. For more information about accessible services, contact us or call 615-782-6577. TPAC reminds ticket buyers that the only official place to buy tickets online is TPAC.org.