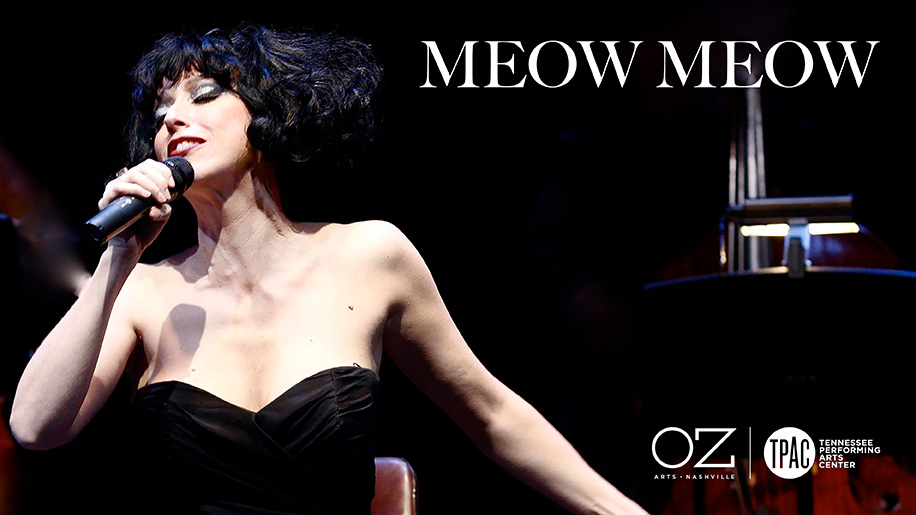 Named one of the “Top Performers of the Year” by The New Yorker, the Australian-born Meow Meow seduces audiences with her spellbinding vocal talents and uproarious comic absurdity — then breaks their hearts with searing emotional depth. From Piazzolla tangos, German stage songs and sultry cabaret numbers to alt rock interpretations of Radiohead and Patty Griffin, audiences can expect to hear a century-spanning repertoire with off-beat jokes, incisive wit and polished character.

“TPAC values the collaboration with OZ Arts Nashville to host Meow Meow’s debut cabaret performance in Music City,” says Jennifer Turner, TPAC President and CEO. “Through this partnership, we have the ability to bring this immensely talented, internationally known artist to Nashville for a unique experience that audiences will never forget.”

The spectacular, crowd-surfing empress embodies a new kind of 21st century cabaret with plenty of sensational singing, witty banter and sass for days. With David Bowie and Pina Bausch as curators of her work, Meow Meow is an award-winning phenomenon who has dazzled audiences from Shanghai to the dives of Berlin, on London’s glittering West End to the Kennedy Center. She has performed with internationally acclaimed orchestras like the London Philharmonic and the Berlin Philharmonie, and she collaborated closely with the iconic band Pink Martini.

“We are thrilled to partner with TPAC to bring the eccentric talents of Meow Meow to such an iconic Nashville venue,” said Mark Murphy, OZ Arts Executive and Artistic Director. “Her incredible mix of awe-inspiring vocals, unstoppable wit and fearless talent will deliver a one-of-a-kind night out and set a new bar for cabaret in Nashville.”

Post-modern diva Meow Meow has hypnotized, inspired, and thrilled audiences globally with unique creations and sell-out seasons from New York’s Lincoln Center and Berlin’s Bar Jeder Vernunft to London’s West End and the Sydney Opera House. She has been called “sensational” (The Times, UK), a “diva of the highest order” (New York Post), “The Queen of Chanson” (Berliner Zeitung), and “a phenomenon” by the Australian press. Her award-winning works have been curated by David Bowie, Pina Bausch and Mikhail Baryshnikov.

Meow Meow’s original works have played from Edinburgh International Festival to Berkeley Rep, from the Southbank Centre to the Sydney Festival and Shakespeare’s Globe, from Shanghai to Slovenia, and most recently the Brooklyn Academy of Music. In addition to being a prolific original music and theatre creator, Meow Meow specializes in the Weimar repertoire and French chanson. She has played Jenny in Brecht/Weill’s “Threepenny Opera” in Paris and London with the London Philharmonic and Anna 1 and 2 in Brecht/Weill’s “Seven Deadly Sins” with Orchestra Victoria and with United Ensemble at the Konzerthaus Berlin, as well as numerous Weimar works with Sydney Symphony Orchestra, San Francisco Symphony, Seattle Symphony, the Australian Chamber Orchestra and the Bergen Philharmonic.

Meow Meow has performed as a guest artist with iconic orchestra Pink Martini at the Berlin Philharmonie, Royal Albert Hall, Opera Garnier Monte Carlo, the Hollywood Bowl and across the concert stages of Europe, Canada and the United States. Their album “Hotel Amour: Meow Meow” with Thomas M. Lauderdale includes duets with Rufus Wainwright, Barry Humphries, the Von Trapps and the late Michel Legrand. It was released in 2019 and named one of The Times’ top 100 albums of the year.