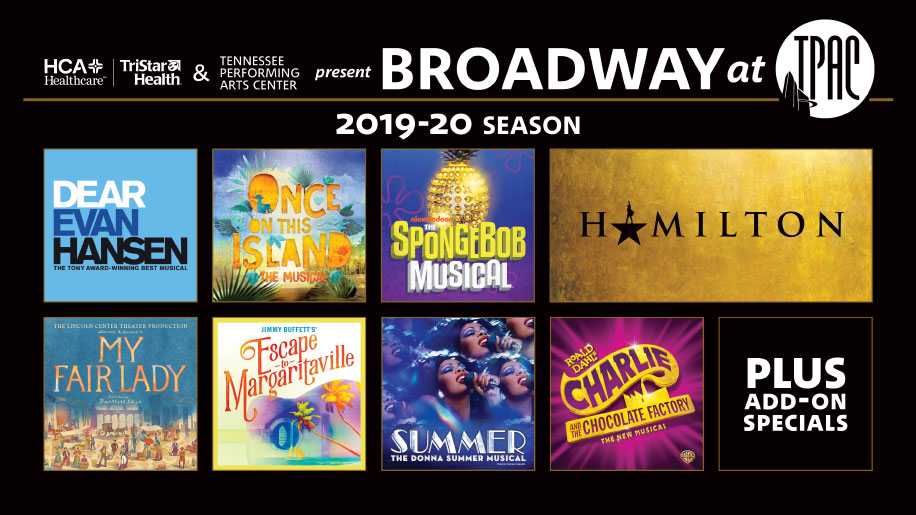 Excitement has been building for the last several months, as Nashville prepares for the arrival of Lin-Manuel Miranda’s musical sensation “Hamilton.” But as Tennessee Performing Arts Center announced the rest of its 2019-20 Broadway season on Tuesday night, local audiences found even more reason to celebrate.

In addition to the previously announced “Hamilton” – which makes its Nashville premiere Dec. 31, 2019-Jan. 19, 2020 – the HCA Healthcare / TriStar Health Broadway at TPAC season boasts recent Tony Award-winning hits such as “Dear Evan Hansen,” “Once on This Island,” “The Color Purple,” and “The Spongebob Musical.” The lineup also includes classic titles like “Cats,” “My Fair Lady” and “Jesus Christ Superstar,” along with new fan favorites “Escape to Margaritaville,” “Charlie and the Chocolate Factory” and “Summer: The Donna Summer Musical.”

“Yes, Hamilton is brilliant,” says TPAC’s longtime president and CEO Kathleen O’Brien, who will be retiring in July. “And we’re so thrilled to be bringing this landmark musical to Nashville. But the beauty of this season is that each show has its own appeal. This season is accessible for everyone, providing a really wonderful blend of work that will challenge and entertain our audiences.”

Ben Levi Ross as ‘Evan Hansen’ and the Company of the First North American Tour of Dear Evan Hansen.

O’Brien unveiled the season at TPAC’s annual announcement party for season ticket holders, donors and other guests, which featured a champagne toast and appetizers, along with some outstanding performances. Students from The Hillsboro High School Theatre Department (under the direction of Kristin Moon and Will Butler, with music direction by Janelle Ganske) and The Central Magnet School Choral & Theatre Departments (under the direction of Kevin Brenner and Taylor Lindsey) kicked off the evening with “You Will Be Found” from “Dear Evan Hansen.”

Nashville-based singer/songwriter Chris Roberts – who starred in the world premiere of “Part of the Plan” at TPAC in 2017 – delivered a powerful rendition of “Gethsemane” from “Jesus Christ Superstar.” And Broadway’s own Storm Lever lit up the stage with Donna Summer’s iconic “Last Dance.”

The crowd showed its appreciation with steady applause throughout the evening. Big cheers went up for “Dear Evan Hansen,” the Tony Award-winning Best Musical which opens the new season September 10-15. And there was a great deal of buzz surrounding the Lincoln Center Theater’s gorgeous new production of Lerner & Loewe’s “My Fair Lady,” which arrives February 4-9, 2020.

“The announcement party is such a great event,” O’Brien says. “It feels like Christmas. As each show is revealed, it’s like unwrapping a new present. It’s exciting to to see what the audience will respond to, and the performances are always great. It’s really a fantastic evening of entertainment.”

As TPAC’s Executive Vice President of Programming and Sales, Christi Dortch says the new season feels like “a beautiful reflection of big ideas and Broadway magic.”

“This season just feels very special,” she says. “I’m so excited for Nashville to experience ‘Hamilton,’ and to finally understand what all the fuss is about there. It really is a remarkable, groundbreaking piece of theatre. But the rest of the season is strong, as well. ‘Dear Evan Hansen’ is so weighty and wonderful, and ‘Once on This Island’ is just beautifully staged.

“Even the classic titles offer a little different take on things. The new tour of ‘Jesus Christ Superstar’ is very modern and incredibly accessible. And no matter how many times you’ve seen ‘Cats,’ Andy Blankenbuehler’s choreography definitely feels fresh.

“My goal is always to build a balanced season,” she adds. “Current hits, familiar classics, maybe something a little more challenging, or just something that you didn’t necessarily expect to connect with. I love the idea that someone may be super excited about ‘Hamilton’ or ‘Dear Evan Hansen,’ but doesn’t really know much about ‘Cats’ or ‘Escape to Margaritaville.’ And the opposite is also true. I know there will be people who can’t wait to revisit ‘My Fair Lady,’ but have no idea how much they’re going to enjoy ‘The Spongebob Musical.’”

And while Dortch does not approach programming with any specific theme or concept in mind, she says that a number of shows this season explore the importance of individual expression.

“As Nashville continues to grow and change, it’s important to me that we reach as much of the community as possible,” says Dortch, who was born and raised in Music City. “I think a lot of these shows remind us that we can be open to new ideas, and still be true to who we are. And with everything that’s going on in the world, that’s pretty powerful.”