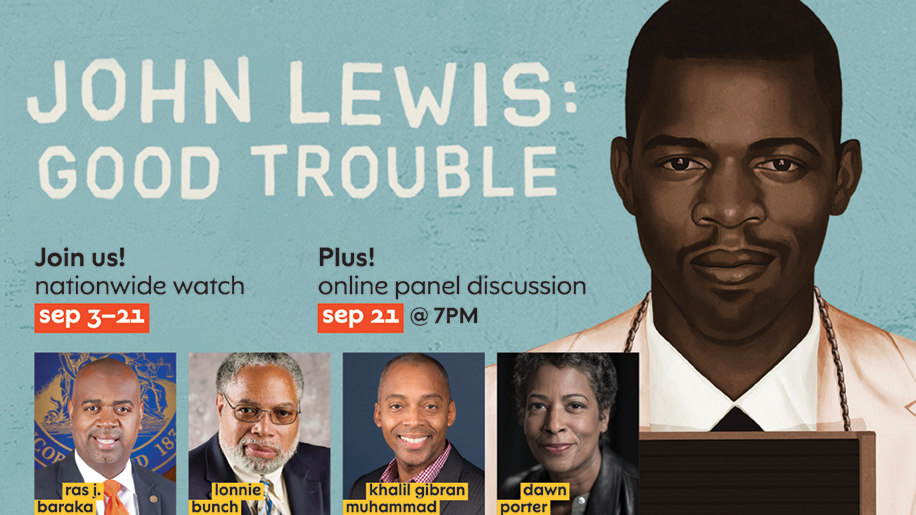 TPAC is inviting Nashville and Middle Tennessee to join a nationwide watch of the riveting new documentary, John Lewis: Good Trouble, which looks at the impact of Rep. John Lewis’s life and work.

In collaboration with more than 60 arts and cultural institutions across the country, TPAC is providing digital access to the film from Magnolia Pictures for $12 now and an opportunity to take part in a live virtual conversation about Rep. Lewis’s remarkable legacy on Sept. 21 at 6 p.m. CT.

Freedom Rider and Congressman, Presidential Medal of Freedom honoree and conscience of the nation, Rep. Lewis served the cause of social justice for decades, both as an elected representative and as a groundbreaking activist whose fervent belief in getting into “good trouble, necessary trouble” for the cause of racial equality changed our country.

This special access to the documentary includes two extra features: Film of an interview Rep. Lewis gave to Oprah Winfrey shortly before his death as well as a one-hour panel, recorded in July, between the documentary’s director, Dawn Porter, and two of Rep. Lewis’s fellow original Freedom Riders, Dr. Bernard Lafayette, and Dr. Rip Patton.

After screening the film, audiences are invited to register for a live, interactive online panel discussion about Rep. Lewis’s history and impact on the social justice struggles of today. Panelists include Porter; Newark Mayor Ras J. Baraka; Khalil Gibran Muhammad, Professor of History, Race and Public Policy at Harvard Kennedy School and Director of the Institutional Antiracism and Accountability Project and Lonnie G. Bunch III, Secretary of the Smithsonian Institution, who worked to establish the Smithsonian’s National Museum of African American History and Culture. U.S. Sen. Cory Booker from New Jersey will provide opening remarks.

Unlock digital access to John Lewis: Good Trouble directly from Magnolia Pictures. The film’s rental fee of $12 includes a $5 donation to TPAC. After unlocking, you’ll have 30 days to start watching. Once you begin, you’ll have 72 hours to finish watching.

Then, register for the free virtual conversation via Zoom on Monday, Sept. 21 at 6:00 p.m. CT.

The online conversation and coordinated effort is produced by the New Jersey Performing Arts Center (NJPAC) of Newark, New Jersey.

“We’re so proud to join NJPAC and dozens of arts organizations across the country in making available this important documentary on Rep. John Lewis and his life-long work to dismantle racism and promote social justice,” says Jennifer Turner, TPAC President and CEO. “Lewis’s long legacy of activism began in Nashville, and I hope people here and throughout Middle Tennessee will be inspired by his example to continue the fight for equality and social change in their own lives.”