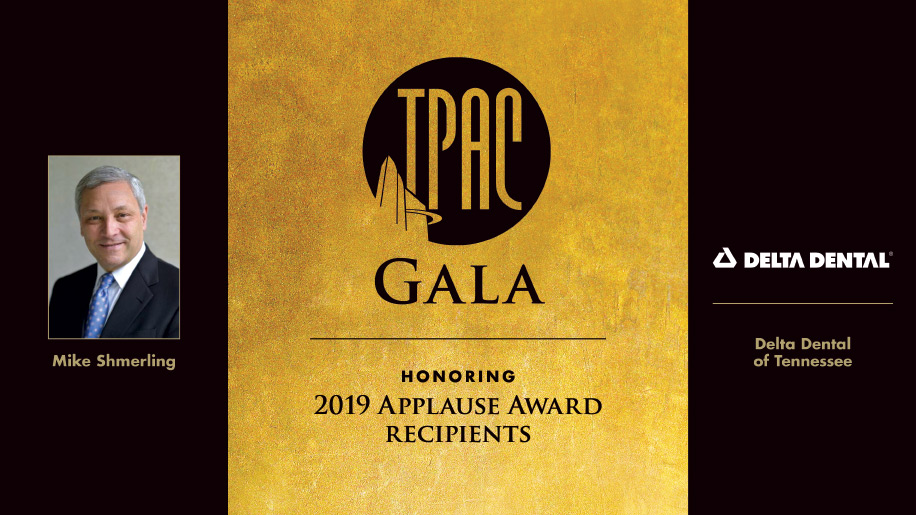 TPAC will present its highest honor, the Applause Award, to Delta Dental of Tennessee and former TPAC Board Member, TPAC Foundation chairman, and chairman of Clearbrook Holdings Corp. Michael D. Shmerling, at the 2019 TPAC Gala on Saturday, Aug. 24.

“Since moving to Nashville, I’ve been inspired by the depth of this vibrant arts community and the commitment of individuals, organizations and corporations to ensuring Nashville is a richly creative city that continues to attract hundreds of newcomers like me,” says Jennifer Turner, TPAC President and CEO. “I’m delighted to honor Mike Shmerling and Delta Dental, two arts advocates whose generous contributions to TPAC’s mission have helped us foster an arts centered approach to learning and enrich the lives of our fellow Tennesseans.”

Since 2011, Delta Dental of Tennessee has supported TPAC’s work to educate young Tennesseans about the value of oral health via the Wolf Trap Early Learning Through the Arts program. Delta Dental invests in TPAC programming, most recently as a presenting show sponsor of “The Wizard of Oz” and the TPAC and Lythgoe Family Give Kids Panto production of “Peter Pan and Tinkerbell – A Pirate’s Christmas,” and supporting community initiatives like Kids Night on Broadway. TPAC and Delta Dental have partnered to produce educational videos designed to help parents and teachers show children the value of dental care utilizing teaching artists in Head Start classrooms and Metro Schools.

Delta Dental has been the title sponsor of the gala for the past six years. Dr. Phil Wenk, President & CEO of Delta Dental, also has provided valuable guidance on TPAC’s Board of Directors since 2012, currently serving as Vice Chair of the board.

“At Delta Dental, our mission is to ensure healthy smiles. Two of the ways we do that are by helping Tennesseans stay healthy and making our community a great place to call home,” says Dr. Wenk. “TPAC does both of those things, too. Their education program teaches young people about how good oral health practices affect your whole health, and the arts help us learn how our experiences connect us and can bring us together as a community. Our sponsorship of the Gala allows TPAC to bring arts and education into Middle Tennessee classrooms, creating these enriching experiences for our youth. There’s no greater return on our investment than watching the teaching artists in the classroom and seeing the smiles on the children’s faces.”

Shmerling, chairman of Clearbrook Holdings Corp., served on TPAC’s Board of Directors from 1999 to 2006, including a term as the Board’s treasurer. After his term, he served on the TPAC Foundation Board from 2009 through 2018 and as the foundation board chair from 2010 to 2018. Committed to TPAC’s future and the immeasurable value that the exposure to the arts has on all ages, Shmerling’s expertise in finance was instrumental in creating a solid financial plan for the organization, allowing it to expand its programs.

“I couldn’t be more proud of TPAC and the tremendous impact it has had on this community over its amazing 40-year life,” says Shmerling. “It has been a true honor and pleasure to have served on TPAC’s Board and Foundation Board for over 16 years. As for its future – the show must – and will go on!”

In addition to celebrating the honorees, TPAC Gala, co-chaired by David and Lisa Minnigan and Gary Bynum, is themed to Broadway’s Hamilton, which makes its Nashville debut Dec. 31, 2019, to Jan. 19, 2020. Hamilton is the story of America’s Founding Father Alexander Hamilton, an immigrant from the West Indies who became George Washington’s right-hand man during the Revolutionary War and was the new nation’s first Treasury Secretary. Featuring a score that blends hip-hop, jazz, blues, rap, R&B and Broadway, Hamilton is the story of America then, as told by America now.

A fun and theatrical benefit, TPAC Gala begins with cocktails and an online silent auction at 6 p.m. in the lobby of Andrew Jackson Hall, followed at 8 p.m. with the award presentation, a seated fine-dining experience on stage and post-event entertainment by Chris Lee, a former Belmont student and member of the cast of Hamilton. Lee will be joined by students from Belmont University’s award-winning Musical Theatre program.

Lee is currently shooting a major recurring role in the new CW series Legacies, which is a spin-off of the highly successful The Originals. He recently wrapped the national tour of the smash Broadway musical Hamilton, playing the dual role of “Marquis de Lafayette” and “Thomas Jefferson.” He landed the role after answering a casting call as a junior musical theater student at Belmont University. Lee is currently recurring on The Chi and Empire, both shooting in Chicago, and he recently did a sketch pilot presentation with Wayne Brady in Los Angeles.

TPAC Gala also includes a Late Party sponsored by Sidewalk Records, a division of Curb Entertainment, starting with cocktails at 8 p.m. on stage in TPAC’s Polk Theater. The event includes an open bar, appetizers and entertainment at 9 p.m. by Young Hearts, with a special performance by Wyn Starks. Tickets are $85 per couple, or $50 per person, and are available at TPAC.org.

About Delta Dental of Tennessee

Delta Dental of Tennessee is the state’s largest independent dental benefits carrier with more than 1.2 million lives covered. As part of the Delta Dental Plans Association, Delta Dental members have access to the largest dental network in the nation with more than 154,000 providers serving more than 332,000 locations. With the simple mission of “ensuring healthy smiles,” Delta Dental works hard to help members of the communities it serves. Along with its corporate foundation, Smile180, the company donated $5.2 million to over 120 organizations in 2018, and its 75 employees shared 2,378 volunteer hours in the community.

A native of Nashville, Mike Shmerling began his career 42 years ago as a Certified Public Accountant with the Nashville office of Ernst & Young, formerly Ernst & Ernst CPAs. Following 17 years in Public Accounting, Shmerling founded or co-founded eleven businesses, four of which were ultimately sold to publicly traded (NYSE or NASD) companies. Following the sale of Background America, Inc. to Kroll Inc, in 1998, he joined Kroll – eventually serving as a member of the Board, EVP, Chief Operating Officer of Kroll Inc.; and subsequently a Senior Advisor to Marsh Inc., following the sale of Kroll to Marsh. He currently serves as Chairman of private equity firm Clearbrook Holdings Corp, formerly known as XMi Holdings. In 2007, Shmerling was awarded both the Tennessee Society of CPA’s; and the American Institute of CPA’s Public Service Award. In 2009, he received Community Nashville’s Human Relations Award. He has received numerous Nashville Business Journal Future 50 – as well as INC. 500 Awards for companies in which he was involved. In addition to this recognition, he received the Tennessee Society of CPAs – Outstanding CPA in Business and Industry Award in 1999. Shmerling currently serves as Founder and Board Chair of not for profit, Abe’s Garden. In addition, he serves on the board of United Way of Metropolitan Nashville. Over the last 40 years, he has served on no less than 25 nonprofit boards, including Fisk University, The Community Foundation, Renewal House, Tennessee Performing Arts Center, the TPAC Foundation, and the Tennessee Society of CPA’s. He currently serves on two public company boards; Renasant Bank and HealthStream Inc. Shmerling and his wife, Lisa, have three children; Andy, Mollie, and Katie; and four grandchildren; David, Jack, Abby and Max.